The Garonne (French: Garonne, IPA: [ɡa.ʁɔn]; in Occitan, Catalan, Portuguese and Spanish: Garona; Latin: Garumna[1] or Garunna) is a river in southwest France and northern Spain, with a length of 602 kilometres (374 mi). It flows into the Atlantic Ocean at Bordeaux.

150º Panorama of the Aran Valley from the Beret Plateau, showing the Ruda-Garona and Beret-Garona confluence. In Vielha the Garonne turns westward (out of sight), and after 12 kilometres (7 mi) receives water from the Joèu (Pic Aneto). 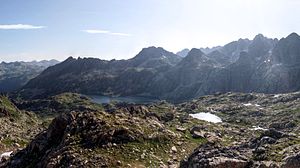 The Main Lake of Saboredo and Pic de Saboredo, the head of the Garonne valley. 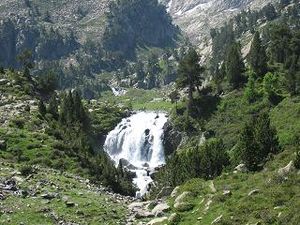 The Uelh deth Garona at 1,862 metres (6,109 ft) above sea level has been traditionally considered as the source of the Garonne. From this point a brook (called the Beret-Garona) runs for 2.5 kilometres (1.6 mi) until the bed of the main upper Garonne valley. The river runs for another 38 kilometres (24 mi) until the French border at Pont de Rei, 40.5 kilometres (25.2 mi) in total.

The Ratera-Saboredo cirque is the head of the upper Garonne valley, and its upper lake at 2,600 metres (8,500 ft) above sea level is the origin of the Ruda-Garona river, running for 16 kilometres (9.9 mi) until the confluence with the Beret-Garona brook, and another 38 kilometres (24 mi) until the French border at Pont del Rei, 54 kilometres (34 mi) in total. At the confluence, the Ruda-Garona carries 2.6 cubic metres per second (92 cu ft/s) of water.[2][3] The Ratera-Saboredo cirque has been pointed by many researchers as the origin of the Garonne.[4][5][6][6][7]

Despite the lack of universal agreement upon definition for determining a stream's source, the United States Geological Survey, the National Geographic Society, and the Smithsonian Institution agree that a stream's source should be considered as the most distant point (along watercourses from the river mouth) in the drainage basin from which water runs.[13][14][15][16][17]

The Ratera-Saboredo cirque is the "most distant point (along watercourses from the river mouth) in the drainage basin from which water runs",[18][19] and the source of the Garonne, according to the United States Geological Survey, the National Geographic Society, and the Smithsonian Institution convention upon determining a stream's source.

The Garonne follows the Aran Valley northwards into France, flowing via Toulouse and Agen towards Bordeaux, where it meets the Gironde estuary. The Gironde flows into the Atlantic Ocean (Bay of Biscay). Along its course, the Garonne is joined by three other major rivers: the Ariège, the Tarn, and the Lot. Just after Bordeaux, the Garonne meets the Dordogne at the Bec d'Ambès, forming the Gironde estuary, which after approximately 100 kilometres (62 mi) empties into the Atlantic Ocean. Other tributaries include the Save and the Gers.

The Garonne is one of the few rivers in the world that exhibit a tidal bore.[20][21][22] Surfers and jet skiers could ride the tidal bore at least as far as the village of Cambes, 120 kilometres or 75 miles from the Atlantic and even further upstream, although the tidal bore appears and disappears in response to changes in the channel bathymetry. In 2010 and 2012, some detailed field studies were conducted in the Garonne River (France) in the Arcins channel between Arcins Island and the right bank close to Lastrene township.[20] A striking feature of the field data sets was the large and rapid fluctuations in turbulent velocities and turbulent stresses during the tidal bore and flood flow.[21][22][23]

Towns along the river

The Garonne at Toulouse.

Following the flow of the river:

The Garonne plays an important role in inland shipping. The river not only allows seagoing vessels to reach the port of Bordeaux but also forms part of the "Canal des Deux Mers", linking the Mediterranean Sea to the Atlantic Ocean, allowing a shorter and safer way for goods to pass from the agricultural areas of the South of France to the Atlantic.

From the ocean, ships pass through the Gironde estuary until the mouth of the Garonne (to the right of the Dordogne when sailing upstream). The Garonne remains navigable for larger vessels up to the "Pont de Pierre" (Stone Bridge) in Bordeaux. River vessels can sail upstream to Castets-en-Dorthe, where the Garonne Lateral Canal (Canal Latéral à la Garonne) joins the river.

Prior to the building of the Garonne Lateral Canal, constructed between 1838 and 1856, river shipping used the Garonne itself as far as Toulouse. However the navigation of the upper river was very uncertain, and this stretch of the river is no longer considered navigable. Instead the lateral canal takes the ships through 53 locks to the town of Toulouse, where the canal meets the Canal du Midi, the next stage of the "Canal des Deux Mers".[24]

The Garonne Lateral Canal was subject to one of the largest infrastructure works in Europe, when it was adapted to the standardized barge size of 38 by 5 metres (125 by 16 ft), during the 19th century. French minister Freycinet ordered that all major canals used for long distance transport be suitable for vessels of those standard dimensions. The extension of all of the former 30-metre (98 ft) locks to the new standard length was carried out throughout the lateral canal. The other half of the Canal des Deux Mers, the Canal du Midi, partly escaped this operation, because by the time the works had reached the area where the most locks were situated, commercial traffic on the canal had almost disappeared. The works were stopped, leading to the cultural heritage status of the United Nations that has made the Canal du Midi famous. (Source: NoorderSoft Waterways database)