In the Canada 2011 Census, the Garson-Falconbridge corridor within Nickel Centre was counted as part of the population centre (or urban area) of Sudbury, with no separate population statistics published for any individual part of the former town.[1]

Coniston was part of the Township of Neelon, which was incorporated in March 1905. Coniston was subsequently incorporated under the provisions of the Municipal Act by Ontario Municipal Board Order A4741 on January 1, 1934, and remained such until the establishment of regional government. Prior to its annexation into Nickel Centre, the town's mayors were Edgar Taylor Austin (1934–46), Roy Snitch (1947–52), Walter Kilimnik (1953–57), William Evershed (1958-59), Maurice Beauchemin (1960–62) and Mike Solski (1963-72). Solski, the final mayor of Coniston as an independent town, won election to the mayoralty of the amalgamated town of Nickel Centre in 1972.

Notable residents of Coniston have included hockey players Neal Martin, Noel Price, Toe Blake, Jim Fox and Andy Barbe, as well as many other great hockey players. Address and telephone service in Coniston also includes the smaller neighbourhood of Austin, which may also be known as Old Coniston. This area borders Highway 17 and is home to a baseball field. The baseball field was abandoned and decommissioned prior to 2000 when Coniston became part of Greater Sudbury. 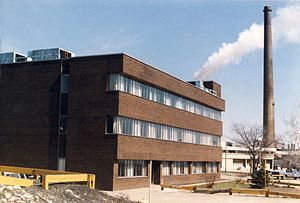 The Edison building, built by Falconbridge Ltd. in 1969, here photographed in 1985

The geographic township of Falconbridge was named in the 1880s for William Glenholm Falconbridge, a justice of the High Court of Ontario. The original settlement in the township was a small lumber camp.

A significant ore body was discovered in 1902 by Thomas Edison near what is now Falconbridge's Centennial Park.[2] The Edison Ore-Milling Company was unsuccessful in establishing a mining operation, and abandoned his original claim in 1903. The claim reverted to Crown land until the Longyear Drilling Company bought it in 1911. Longyear subsequently merged with other small mining companies in the area to form the basis of what would ultimately become Falconbridge Ltd., although actual mining operations in the community did not begin until 1928, when Thayer Lindsley purchased the company for $2,500,000 and finally sunk the Falconbridge deposit's first mine shaft the following year.

Falconbridge was incorporated as a town in 1957. The town's first and only reeve, John Franklin, served until the creation of Nickel Centre in 1973.

A visual and radar UFO incident occurred in the community on November 11, 1975, later reported in a press release by NORAD. The object was tracked on radar from CFS Falconbridge and sighted in binoculars, and estimated to be a 100-ft. diametre sphere with craters. Seven OPP police officers also witnessed the UFO. Some explanations given for the sightings included Venus, clouds, and/or weather balloons.[3] 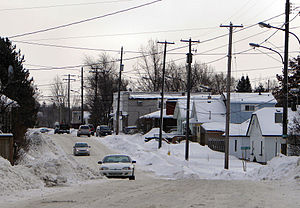 The community is named after the geographic township of Garson, named by the Ontario Government in the 1880s for William Garson, who represented Lincoln in the Legislative Assembly of Ontario from 1886 to 1890.

The area was first developed in 1888 as a logging camp, by the Holland and Emery Lumber Company of East Tawas, Michigan. In that year this firm constructed a narrow gauge logging railway from Wahnapitae, establishing its main operations at Headquarters Lake, near the Garson townsite. Logs from this area were taken to the Wanapitei River and driven to Lake Huron. Eventually this track was extended north into Capreol Township.

The Canadian Northern Railway was built through Garson in 1908.

Garson Mine, which is now owned by Vale Inco was first developed in 1911 by the Mond Nickel Company. The defunct Kirkwood Mine was also located in Garson.

Skead is located approximately 25 kilometres northeast of downtown Sudbury, and situated on south shore of Lake Wanapitei. Home to over 600 year round residents, Skead was settled about 1921 as a sawmill community, when the Spanish River Lumber Company relocated there from its original mill site, near the mouth of the Spanish River. It was named by the firm's general manager W. J. Bell, in honour of his late father-in-law, Canadian Senator James Skead.

The community takes its name from the Wanapitei River, which flows through Wahnapitae, and whose name in turn comes from the Ojibwe word waanabidebiing, which means "concave-tooth [shaped] water" and describes the shape of Lake Wanapitei.[4] The correct spelling of the community's name should not be confused with the correct spelling for the water bodies.

The community should not be confused with the Wahnapitae First Nation.

The ghost town of Happy Valley, originally known as Spruce Valley, was first inhabited in 1906 by workers from the nearby mine at Garson. Not wanting to live in a state of dependency in the company town, they built this smaller town of humble shacks with narrow streets. In 1930, the Garson Mine shut down, and the workers were transferred to the mines at Falconbridge.

However, due to temperature inversions, the smelter at Falconbridge created severe pollution problems in Happy Valley, as heavy sulphur emissions from the smelter would become trapped in the valley. For years, workers suspected that they were being poisoned by pollution, and these fears were confirmed in the 60s and 70s as society grew more environment-conscious. For several years, the community reached a deal with Falconbridge that the smelter would not operate on days when a north wind was blowing. Eventually the company simply bought out the town, which was entirely abandoned in the late 1960s. Today the valley remains desert-like and dead because of pollution.[5]

The Greater Sudbury Airport, the city's main airport, is located in Nickel Centre approximately halfway between Falconbridge and Skead, although its official mailing address is in Garson.