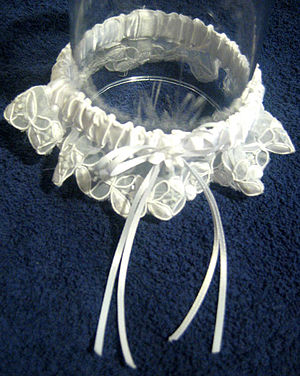 Garters are articles of clothing: narrow bands of fabric fastened about the leg, used to keep up stockings, and sometimes socks. In the eighteenth to twentieth centuries, they were tied just below the knee, where the leg is most slender, to keep the stocking from slipping. The advent of elastic has made them less necessary from this functional standpoint, although they are still often worn for fashion. Garters have been widely worn by men and women, depending on fashion trends. 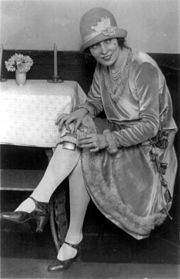 Hip flask tucked into a garter during Prohibition

Garters were popular in the 1930s and 1940s, and were a convenient way for ladies to carry small valuables, in place of a small purse[citation needed].

In Elizabethan fashions, men wore garters with their hose, and colorful garters were an object of display. In Shakespeare's Twelfth Night, "cross braced" garters are an object of some derision.

In male fashion, a type of garter for holding up socks has continued as a part of male dress up to the present, although its use may be considered somewhat stodgy.

Use in wedding traditions 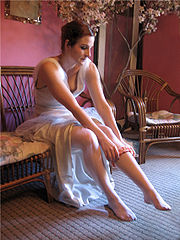 Bride putting on a garter

There is a Western wedding tradition for a bride to wear a garter to her wedding, to be removed towards the end of the reception by the groom. This garter is not normally used to support stockings. This practice is often interpreted as symbolic of deflowering, though some sources attribute its origin to a superstition that taking an article of the bride's clothing will bring good luck.[1] In the Middle Ages, the groomsmen would rush at the new bride to take her garters as a prize.[2]

Today, the practice of removing the bride's garter is traditionally reserved to the groom, who will then toss the garter to the unmarried male guests. This is performed after the tossing of the bouquet, in which the bride tosses her bouquet over her shoulder to be caught by the unwed female guests. According to superstition, the lady who catches the bouquet and the man who catches the garter will be the next man and woman among those in attendance to be married (though perhaps not to each other). The ceremony often continues with the man who catches the garter obliged to place it on the leg of the lady who caught the bouquet. Traditionally, the pair are obliged to share the next dance.[1]

Use at high school proms in the United States

Prom garters were common in the 1960s & 70s, and often conferred on the date as a souvenir. If the date received the garter, it was typically hung from his rear-view mirror.

Beginning in the mid-2000s,[3] it has become common in the United States for young women attending a high school prom to wear a garter, usually designed to match the style and color of the young woman's dress. The prom garter may be worn throughout the evening and is sometimes given to the young woman's date as a souvenir. A young woman may also choose to keep the garter rather than give it away, as a token of her prom night. In some cases, young people may participate in a "garter and tie" dance (often hosted by the high school as part of the prom), during or after which either the young woman herself or the young woman's date removes the garter and exchanges it for the date's tie. In cases like this where the garter is given early in the evening, the young woman's date may wear it on his arm for the remainder of the evening. In areas where prom garters are common, it has become a tradition for young women to pose for a picture with other female friends before the prom, in which they pull up the skirts of their dresses to display their prom garters, which are generally worn a few inches above the right knee. The giving or taking of the prom garter may or may not have the same sexual implications that are associated with wedding garters; however, the giving of the prom garter is often interpreted as publicly designating the pair as a romantic couple. 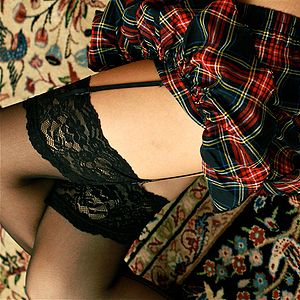 A woman with her suspenders showing
File:BostonCarterLigas.JPG
Boston Carter garters for men from the beginning of the 20th century from the permanent collection of the Museo del Objeto del Objeto

Suspender or garter belts are usually a woman's undergarment consisting of an elasticated material strip usually at least 2" to 3" in width, but can be wider, that is worn around the waist, to which 2 or 3 elastic suspender 'slings' are attached on each side, where the material is shaped to the contours of the body. The suspenders are typically clipped to the stockings with metal clips into which a rubber disc is inserted through the stocking material effectively 'locking' the stocking in place. These are normally attached to a length of elastic allowing for adjustment. These clips, also known as suspender slings, are best attached to stockings with a simple welt that do not have lace, or 'hold-ups' with a silicon rubber lining.

Suspender belts for men do exist, usually worn when there is a need to wear support hosiery for medical reasons.

Suspender (garter) belts are usually worn at the waist or just slightly below. If worn too low on the hips, there is a chance of the belt sliding down, as it is pulled downward by the stockings. The garment should fit closely on the waist, but not too tight. Some underwear, such as corselettes or girdles, referred to as shapewear, may come with suspender slings attached.

In the 21st century, pantyhose or tights are more widely worn than stockings. Hold-ups are an alternative way for keeping stockings up, with a band of latex rubber molded to the stocking top. Nevertheless, suspenders continue to be used by women who prefer not to wear tights for health reasons. Women who suffer from thrush or cystitis may be advised not to wear tights as nylon worn close to the genital area can exacerbate any infection present. Similarly latex rubber in hold-ups may irritate some people's skin. A suspender (garter) belt is the only option in these cases.

The other reason for wearing support stockings is for medical reasons associated with varicose veins or poor circulation.

Ice hockey players use suspenders for holding up hockey socks. As these socks are essentially woollen tubes, they need to be kept from rolling onto ankles. The socks can be held up by either hockey tape or hockey suspenders, which function like stocking suspenders.

Some women wore stockings with a plain elastic garter or narrow material tied tightly, not suspenders, or by simply rolling the top of the stocking, because it seemed more practical or they could not afford classic corsetry, thus creating a kind of predecessor of the modern hold ups. This was particularly common among servants and housemaid, particularly until the mid 1920s when the more modern suspender became readily available

During the world's first long distance journey by automobile in 1888 Bertha Benz, the wife of the inventor of the automobile Dr Carl Benz, used a garter to insulate a broken wire of the Benz Patent-Motorwagen Nr. 3. In remembrance of this historic road trip today's official German scenic byway Bertha Benz Memorial Route follows the tracks of Bertha Benz from Mannheim via Heidelberg to Pforzheim (Black Forest) and back. Stockings have also been used as an emergency replacement for a car's fanbelt'

From the 1940s to '60s, suspenders became a common, popular alternative to the girdle, especially among teens and young women. Amid concerns girdles might cause abdominal flabbiness, suspender belts offered a simpler, more practical, and more comfortable choice when used simply to hold up their stockings.

Suspender belts continue to be worn for their original purpose of holding up stockings. Suspenders today are available in a variety of styles, most commonly in white, 'fleshtone' beige-pink, or black with a satin finish. These are often now made from a mixture of nylon and spandex / lycra, being more readily available in retail stores. Variations of the suspender or garter belt include knickers with suspender attachments reminiscent of images of the 1960s, and corsets or girdles with small loops inside the bottom edge for attaching suspenders. Knickers are normally worn on top of the suspender belt as this makes it easier to remove them to use the lavatory / bathroom. If worn underneath the belt, undressing may be rather complicated if using a public facility.

Order of the Garter

Main article: Order of the Garter

A famous "garter" in English is the Order of the Garter, which traces its history to the Middle English poem Sir Gawain and the Green Knight. In the poem, Gawain accepts a girdle (very similar in function and connotation to a garter) from the wife of his host (while resisting her pretend carnal temptations) to save his life and then wears it as a mark of shame for his moral failure and cowardice. King Arthur and his men proclaim it no shame and begin, themselves, to wear the girdle to indicate their shared fate. At that point, however, the garter was a larger garment that was used as a foundation.

The Order, which is the oldest and highest British Order of Chivalry, was founded in 1348 by Edward III. The Order consists of Her Majesty The Queen who is Sovereign of the Order, His Royal Highness The Prince of Wales and 24 Knights Companions.

The origin of the symbol of the Most Noble Order of the Garter, a blue 'garter' with the motto Honi Soit Qui Mal Y Pense will probably never be known for certain as the earliest records of the order were destroyed by fire, however the story goes that at a ball possibly held at Calais, Joan Countess of Salisbury dropped her garter and King Edward, seeing her embarrassment, picked it up and bound it about his own leg saying in French, "Evil [or shamed] be he that thinks evil of it." This story is almost certainly a later fiction. This fable appears to have originated in France and was, perhaps, invented to discredit the Order. There is a natural unwillingness to believe that the world's foremost Order of Chivalry had so frivolous a beginning.

It is thought more likely that as the garter was a small strap used as a device to attach pieces of armour, it might have been thought appropriate to use the garter as a symbol of binding together in common brotherhood, whilst the motto probably refers to the leading political topic of the 1340s, Edward's claim to the throne of France. The patron saint of the Order is St. George, the patron saint of soldiers and also of England, and the chapel of the order is St. George's Chapel in Windsor Castle.[5]