Gary Paffett (born 24 March 1981 in Bromley) is a British racing driver in the Deutsche Tourenwagen Masters. He is also a test driver for the McLaren Formula One team, but will leave at the end of the 2014 season. Paffett progressed through the ranks of karting and junior formulae in the United Kingdom, winning the McLaren Autosport BRDC Award in 1999. He now lives in Ousden, Suffolk, England.

In 1993, Paffett joined the British Cadet Championships and earned himself a respectable third place. A year later he moved to British Junior TKM Championship and finished second overall. In 1995, he won the British Junior TKM Championship and also second place in the Junior ICA European Championship. Successes continued into 1996, winning the McLaren Mercedes Karting Champion of the Future award and also second in the British Junior ICA Championship. The next year he moved into single-seaters, winning the Formula Vauxhall Junior Winter Series, picking up the best newcomer's award in that series in the process. In 1998, he was Formula Vauxhall Junior Class B Champion with thirteen fastest laps, thirteen poles and thirteen wins, dominating every race of the season. He also set a track record which had never before been set by any "B" class car. He got promoted to the Formula Vauxhall Junior and won the championship with two track records, four wins, five fastest laps, three pole positions. At the season's end he was awarded the prestigious McLaren Autosport BRDC Young Driver of the Year award.

Moving up to Formula Three, he competed in the Scholarship class of the British F3 championship, becoming champion with thirteen wins, thirteen fastest laps and thirteen pole positions. In 2001, moved overseas to the German F3 Championship racing with Keke Rosberg's race team, finishing sixth overall. Remaining in the series for 2002, he dominated the field winning the championship without ever losing the lead.

Paffett won his third DTM race in succession, by winning the season-opener at Hockenheim in 2010.

For 2003, Gary signed to drive for the new Brand Motorsport team in F3000, but the team withdrew from the series leaving Paffett and his team-mate Nicolas Minassian without drives. Mercedes contacted him and signed him to drive in the DTM with Rosberg's Mercedes AMG team in a year-old car, eventually finishing 11th overall. A year later, he was runner up with an up-to-date AMG-Mercedes C-Class and the HWA team taking four wins and one pole position. He was then champion the following year with five wins and four pole positions. In 2007, Gary returned to the DTM in a 2006 specification race car for the Persson Motorsport team alongside his McLaren F1 testing duties. At the second round at Oschersleben, Paffett became the first driver in the history of the series to win in a year old car.[1] After a further year in older machinery, he was promoted back to the current Mercedes model for 2009, and finished runner-up in the championship, behind Timo Scheider.

Paffett competing in the 2014 DTM season. 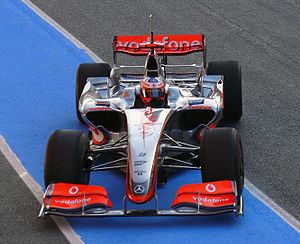 Paffett testing for McLaren at the Autódromo Internacional do Algarve in December 2008.

In December 2005 it was announced that he would not be returning to the DTM series to defend his title but instead would test full-time for McLaren-Mercedes during the 2006 season alongside Pedro de la Rosa. After the departure of Kimi Räikkönen to Ferrari, it was speculated that he may have been in contention for a 2007 race seat in the team alongside World Champion Fernando Alonso. However due to the arrival of GP2 Champion, Lewis Hamilton, Paffett was overlooked for the drive.

Further to this, Paffett was released from his McLaren contract in October 2006, to search for better opportunities. It was widely speculated that he was likely to sign as a test driver at Honda, but Christian Klien was signed instead.[2] A few weeks later however, Paffett was re-signed by McLaren as the team's second test driver, alongside de la Rosa.[3]

He publicly stated that he was looking for a Formula One race seat for 2008,[4] and was linked with the abortive Prodrive F1 project for that season. However, Prodrive failed to make it to the grid so Paffett stayed with McLaren as a test driver.

On 17 November 2014, it was announced that Paffett would leave McLaren at the end of the 2014 season. This coincided with McLaren's switch to Honda engines for 2015.[6]

† - Driver did not finish, but completed 90% of the race distance.
1 - A non-championship one-off race was held in 2004 at the streets of Shanghai, China.