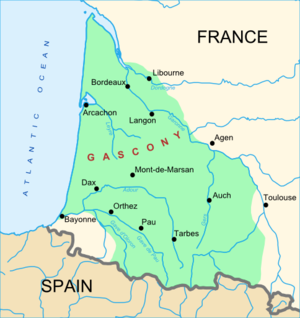 A map of Gascony, showing a wide definition of the region. Other maps may define a smaller area as Gascony. 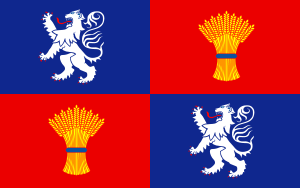 Flag of Gascony (based on the coat of arms)

Gascony (/ˈɡæskəni/; French: Gascogne [ɡaskɔɲ]; Gascon: Gasconha [ɡasˈkuɲɔ]) is an area of southwest France that was part of the "Province of Guyenne and Gascony" prior to the French Revolution. The region is vaguely defined, and the distinction between Guyenne and Gascony is unclear; by some they are seen to overlap, while others consider Gascony a part of Guyenne. Most definitions put Gascony east and south of Bordeaux.

Gascony was historically inhabited by Basque-related people who appear to have spoken a language similar to Basque. The name Gascony comes from the same root as the word Basque (see Wasconia below). From medieval times until today, the Gascon language has been spoken, although it is classified as a regional variant of the Occitan language.

Gascony is the land of d'Artagnan, who inspired Alexandre Dumas's character d'Artagnan in The Three Musketeers. It is also home to the hero of the play Cyrano de Bergerac (though this character has little in common with the real Cyrano de Bergerac, who was a Parisian) and to Henry III of Navarre who later became king of France as Henry IV.

Gascony is famed for its douceur de vivre ("sweetness of life"), its food (it is home to foie gras and Armagnac brandy), its medieval towns and villages locally called bastides nested amidst green rolling hills, its sunny weather, the beauty of its landscape, with the occasional distant views of the Pyrenees mountain range, all contribute to the popularity of Gascony as a tourist destination. 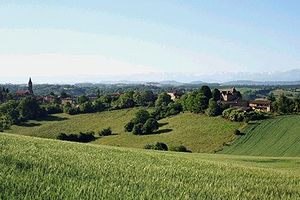 Typical view of the hilly countryside of Gascony, with the Pyrenees mountains in the far distance

In pre-Roman times, the inhabitants of Gascony were the Aquitanians (Latin: Aquitani), who spoke a language related to modern Basque.

The Aquitanians inhabited a territory limited to the north and east by the Garonne River, to the south by the Pyrenees mountain range, and to the west by the Atlantic Ocean. The Romans called this territory Aquitania, either from the Latin word aqua (meaning "water"), in reference to the many rivers flowing from the Pyrenees through the area, or from the name of the Aquitanian Ausci tribe, in which case Aquitania would mean "land of the Ausci".

In the 50s BC, Aquitania was conquered by lieutenants of Julius Caesar and became part of the Roman Empire.

In 297, as Emperor Diocletian reformed the administrative structures of the Roman Empire, Aquitania was split into three provinces. The territory south of the Garonne River, corresponding to the original Aquitania, was made a province called Novempopulania (that is, "land of the nine tribes"), while the part of Gallia Aquitania north of the Garonne became the province of Aquitanica I and the province of Aquitanica II. The territory of Novempopulania corresponded quite well to what we call now Gascony.

The Aquitania Novempopulana or Novempopulania suffered like the rest of the Western Roman Empire from the invasions of Germanic tribes, most notably the Vandals in 407–409. In 416–418, Novempopulania was delivered to the Visigoths as their federate settlement lands and became part of the Visigoth kingdom of Toulouse, while other than the region of the Garonne river their actual grip on the area may have been rather loose.

The Visigoths were defeated by the Franks in 507, and fled into Spain and Septimania, as well as Albania[citation needed]. Novempopulania then became part of the Frankish Kingdom like the rest of southern France. However, Novempopulania was far away from the home base of the Franks in northern France, and was only very loosely controlled by the Franks. During all the troubled and historically obscure period, starting from early 5th-century accounts, the bagaudae are often cited, social uprisings against tax exaction and feudalization, largely associated to Vasconic unrest. 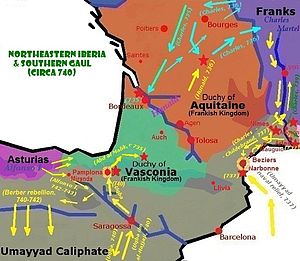 The Duchy was meant to hold sway over the Basques (Vascones)

Modern historians reject this hypothesis, which is sustained by no archeological evidence. For Juan José Larrea, and Pierre Bonnassie, "a Vascon expansionism in Aquitany is not proved and is not necessary to understand the historical evolution of this region".[1] This Basque-related culture and race is, whatever the origin, attested in (mainly Carolingian) Medieval documents, while their exact boundaries remain unclear ("Wascones, qui trans Garonnam et circa Pirineum montem habitant", as stated in the Royal Frankish Annals, for one).[2]

The word Vasconia evolved into Wasconia, and then into Gasconia (w- often evolved into g- under the influence of Romance languages, cf. warranty and guarantee, William and Guillaume). The gradual abandonment of the Basque-related Aquitanian language in favor of a local vulgar Latin, was not reversed. The replacing local vulgar Latin evolved into Gascon. It was heavily influenced by the original Aquitanian language (for example, Latin f- became h-, cf. Latin fortia, French force, Spanish fuerza, Occitan fòrça, but Gascon hòrça). Quite paradoxically (or logically) the Basques from the French side of the Basque Country traditionally call anyone who does not speak Basque a Gascon.

Meanwhile, Viking raiders conquered several Gascon towns, among them Bayonne in 842–844. Their attacks in Gascony may have helped the political disintegration of the Duchy until their defeat against William II Sánchez of Gascony in 982. In turn, the weakened ethnic polity known as Duchy of Wasconia/Wascones, unable to get round the general spread of feudalization, gave way to a myriad of counties founded by Gascon lords.

His 1152 marriage to Eleanor of Aquitaine allowed the future Henry II to gain control of his new wife's possessions of Aquitaine and Gascony. This addition to his already plentiful holdings made Henry the most powerful vassal in France.[3] 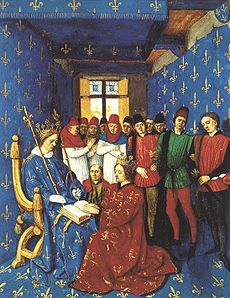 Homage of Edward I (kneeling) to Philip IV (seated)

In 1248, Simon de Montfort was appointed Governor in the unsettled Duchy of Gascony. Bitter complaints were excited by de Montfort's rigour in suppressing the excesses of both the seigneurs of the nobility and the contending factions in the great communes. Henry III yielded to the outcry and instituted a formal inquiry into Simon's administration. Simon was formally acquitted of the charges, but in August 1252 he was nevertheless dismissed. Henry then himself went to Gascony, pursuing a policy of conciliation; he arranged the marriage between Edward, his 14-year-old son, and Eleanor of Castile, daughter of Alfonso X. Alfonso renounced all claims to Gascony and assisted the Plantagenets against rebels such as Gaston de Bearn, who had taken control of the Pyrenees.[4]

In December 1259, Louis IX of France ceded to Henry land north and east of Gascony.[5] In return, Henry renounced his claim to many of the territories that had been lost by King John.

In May 1286, King Edward I paid homage before the new king, Philip IV of France, for the lands in Gascony. However, in May 1295, Philip "confiscated" the lands. Between 1295 and 1298, Edward sent three expeditionary forces to recover Gascony, but Philip was able to retain most of the territory until the Treaty of Paris in 1303.[6]

In 1324 when Edward II of England, in his capacity as Duke of Aquitaine, failed to pay homage to the French king after a dispute, Charles IV declared the duchy forfeit at the end of June 1324, and military action by the French followed. Edward sent his wife Isabella, who was sister to the French king, to negotiate a settlement. The Queen departed for France on 9 March 1325, and in September was joined by her son, the heir to the throne, Prince Edward (later Edward III of England). Isabella's negotiations were successful, and it was agreed that the young Prince Edward would perform homage in the king's place, which he did on 24 September and so the duchy was returned to the English crown.[7]

When France's Charles IV died in 1328 leaving only daughters, his nearest male relative was Edward III of England, the son of Isabella, the sister of the dead king; but the question arose whether she could legally transmit the inheritance of the throne of France to her son even though she herself, as a woman, could not inherit the throne. The assemblies of the French barons and prelates and the University of Paris decided that males who derive their right to inheritance through their mother should be excluded. Thus the nearest heir through male ancestry was Charles IV's first cousin, Philip, Count of Valois, and it was decided that he should be crowned Philip VI of France. Philip believed that Edward III was in breach of his obligations as vassal, so in May 1337 he met with his Great Council in Paris. It was agreed that Gascony should be taken back into Philip's hands, thus precipitating the Hundred Years War between England and France.[8][9] At the end of the Hundred Years' War, after Gascony had changed hands several times, the English were finally defeated at the Battle of Castillon on 17 July 1453; Gascony remained French from then on.[10]

The most important towns are:

The main industries are: