Nicknamed Il Leone del Mugello, "The Lion of Mugello" (from his birthplace Barberino del Mugello, near Florence), Nencini was a powerful all-rounder, particularly strong in the mountains.

He was an amateur painter and a chain smoker. He was a gifted descender. "The only reason to follow Nencini downhill would be if you had a death wish", said the French rider Raphaël Géminiani. It was in trying to follow Nencini down a mountain that Roger Rivière missed a bend, crashed over a wall and broke his spine.

Nencini's downhill race with Henry Anglade has become part of the legend of cycling. Anglade was a proud rider and Nencini one of the fastest down hills. They met at a col in the Dolomites during the Giro d'Italia. The weather was bad and a snowstorm had forced 57 riders to abandon that day. Anglade said:

I couldn't tolerate the idea that Nencini was the best descender of the peloton. I said to him, call the blackboard man,[2] we'll do the descent together and whoever comes second pays for the aperitifs this evening. So he called the ardoisier and asked him to follow us. The road was of compressed earth. We attacked the drop flat out. I let Nencini take the lead so that I could see how he negotiated the bends before attacking him. In the end I dropped as though I was alone. At the bottom, I had taken 32 seconds out of him, written on the blackboard. I was really tickled. I had beaten Nencini. The next time I saw him was that evening in the hotel I was staying at. He had just bought me an apéritif![3]

At the Futa pass, on the mountains over his native Barberino di Mugello, a monument is placed remembering him: a big bronze bas-relief portrait of him racing and the inscription which says: "A Gastone Nencini. Il comune di Barberino, gli sportivi, i compagni di tante battaglie ricordano il campione mugellano" (translated from Italian: "To Gastone Nencini. The administration of Barberino, the sportsmen, the comrades of many battles remember the Mugello-born champion"). 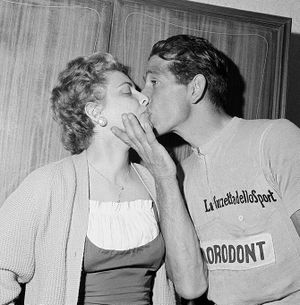 Gastone Nencini with wife Bianca, wearing the pink jersey from the Giro d'Italia 1957