Gastonia is the largest city and county seat of Gaston County, North Carolina, United States. It is also the second largest satellite city of the Charlotte area, behind Concord. The population was 71,741 at the 2010 Census.[1] Gastonia is the 13th largest city in North Carolina.[3] It is part of the Charlotte metropolitan area, officially designated the Charlotte Metropolitan Statistical Area (MSA). Gastonia has experienced steady growth, with a population increase between 2000 and 2010 of nearly 8.2%, according to the U.S. Census Bureau.

Gastonia is named for William Gaston, member of the North Carolina Supreme Court.[4] 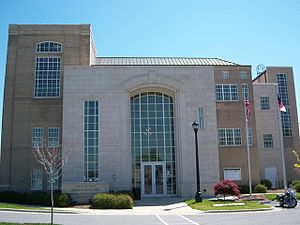 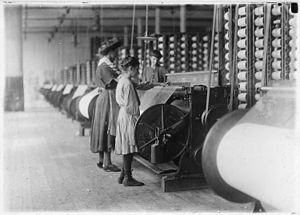 Many shutdowns and job losses have plagued Gastonia over the past decade. Gastonia maintains a relatively strong manufacturing workforce, but many workers are laid off and many more are facing job losses. The city had an unemployment rate of 7.9% as of 2010; 12,536 of the 71,341 residents lived and worked in the city, with a daytime population change of +10,610. The city is the international corporate headquarters for textile company Parkdale Mills, the number one manufacturer of spun yarn in the world.[14] The company also operated two production facilities in Gastonia and several in surrounding communities. Parkdale, like many other companies, has closed plants and moved production to other countries. 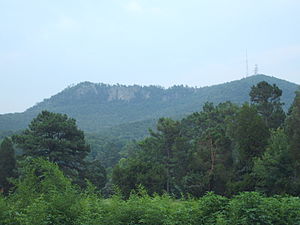 The Schiele Museum of Natural History features a number of permanent exhibits, including the Hall of North Carolina Natural History and the Henry Hall of the American Indian.[16] The museum is also home to the James H. Lynn Planetarium, the only planetarium in the Charlotte area.[17]

The Daniel Stowe Botanical Garden is located just southeast of the city in Belmont on NC 279.

The U.S. National Whitewater Center (on the Catawba River) is located east of the city in neighboring Mecklenburg County.

Crowders Mountain State Park is located west of the city, near Kings Mountain. The park offers a number of hiking trails, as well as campgrounds, picnic areas, rock climbing, and fishing.[18]

There are also a few more shopping centers across the city with other well-known national and local retailers.

The Gastonia Grizzlies play baseball at Sims Legion Park. The team is part of the Coastal Plain League (CPL) featuring players at the collegiate level. The season runs from the end of May to August.

The Gastonia Gargoyles play rugby at Gaston County's North Belmont Park. The team is part of the Carolinas Geographical Union (CGU) and plays Division IV men's social rugby. The club plays in the fall (August - November) and spring (Feb - May) seasons. The club also hosts an annual rugby 7's tournament in Clover, South Carolina, during the Clover Scottish Games on the first or second Saturday in June.

File:Thehaid.jpg
Belmont Abbey College is a four-year college near Gastonia.

All public K–12 schools in Gaston County, including the city of Gastonia, are part of the Gaston County Schools (GCS). GCS operates schools at the elementary, middle, and high school levels.

Although there are no colleges or universities within the city limits of Gastonia, higher education is well represented in the greater Gastonia area. Gaston County is home to Belmont Abbey College (Belmont; four-year) and Gaston College (Dallas, Lincolnton (Lincoln County), and Belmont; two-year).

The Gaston County Public Library has three branches in the city.[21]

The Gaston Gazette is Gastonia's main newspaper. It is published daily, and covers Gastonia city, Gaston County, and surrounding areas. The Charlotte Observer (North Carolina's largest newspaper) is also available and formerly featured a Gaston/Lincoln section on Wednesdays and Sundays, though it has scaled back its coverage of Gaston County dramatically in recent years.

Gastonia has no broadcast television stations licensed in the city, but is served by network affiliates and independent stations broadcasting from nearby Charlotte. Cable television service in Gastonia is provided primarily by Time Warner Cable.

Interstate 85 (I-85) links Gastonia directly with Charlotte, Greensboro, Durham, and Petersburg/Richmond (to the northeast) and Spartanburg, Greenville, Atlanta and Montgomery (to the southwest). Gastonia's transportation network is supplemented by one additional freeway (US 321), the freeway portion of which directly connects Gastonia with transcontinental I-40 and the city of Hickory, North Carolina, 35 miles (56 km) north of Gastonia. An additional limited-access highway, the toll Garden Parkway, is planned as a loop that would encircle Gastonia to the west, while also adding a direct southeastern connection to Charlotte, I-485 and the Charlotte/Douglas International Airport.

Gastonia is also served by three US highways: US 29; US 74 (US 29 and 74 are multiplexed together through Gaston County); and US 321. US 29 parallels I-85 through the Carolinas, while US 74 provides direct east-west links to Charlotte and Wilmington (east), and Asheville and Cherokee (to the west). US 321 links Gastonia to central South Carolina and the Blue Ridge Mountains in northwest North Carolina. 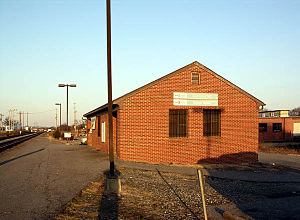 Gastonia Transit (GT) is Gastonia's city transit provider. The bus service operates on a fixed-route system covering most of the city. GT has a new fleet of seven buses and stops are clearly visible around town. Buses run Monday-Saturday, and transfer downtown Gastonia at the Bradley Station. Regular fare is $1.00, transfers are free.

Amtrak's Crescent (trains 19, 20) connects Gastonia (GAS) with the cities of (to the north) New York, Philadelphia, Baltimore, Washington, and Charlotte, and (to the south) Atlanta, Birmingham, and New Orleans. The unmanned Amtrak station is situated at 350 Hancock Street.

The Gastonia area is served by two airports. The Gastonia Municipal Airport (AKH) handles most of the city's private air service needs. It is located in the southeast part of the city, off NC 274. The Charlotte/Douglas International Airport (CLT) provides Gastonia with a major domestic/international gateway and is located 18 miles (29 km) east of Gastonia in Charlotte. CLT is US Airways' largest airline hub.

Gotha was Gastonia's first sister city in 1994. Santiago de Surco became an official partner in March 2004. Mayor Jennie Stultz visited Gotha in 2007. In December 2007, the mayor of Santiago de Surco visited for the annual lighting of the Christmas tree in the Rotary Pavilion. He was invited to light the tree along with one of the city's councilmen.