Gates County is included in the Virginia Beach-Norfolk-Newport News, VA-NC Metropolitan Statistical Area.[3] It is part of the Albemarle Sound area of the Inner Banks.

Gates County is quite prideful in its high school athletics. Gates County High School has won a state championship in football, in 1971. That team was led by legendary coach, Pete Smoak. Most recently, the football team has been successful in the Tar-Roanoke Conference, and winning the conference in 2010. The Red Barons galvanized the entire northeastern part of North Carolina, as it went on its improbable run, winning 11 games in a row, and going undefeated in the conference. This team was led by current head coach, Matt Biggy. It is home to many athletes, including Thomas Smith, formerly of the Buffalo Bills, and Walter Smith I, formerly of the Toronto Argonauts.

As in other areas along the waterways, centuries of Native Americans created settlements, increasingly permanent, along the Chowan River. At the time of European contact, the Chowanoke occupied most of the territory along the river. After suffering dramatic population decreases likely due to European infectious diseases, to which they had no immunity, most were pushed out by encroaching Tuscarora.

With early settlement in the mid-17th century by English colonists, the county was organized in 1779 from parts of Chowan County, Hertford County, and Perquimans County. It was named for General Horatio Gates,[4] who had commanded the victorious American colonial forces at the Battle of Saratoga in 1777.

In 1585, the Ralph Lane Colony explored the Chowan River. They explored the river at least as far up as Winton. In 1622, the John Pory Colony led an expedition from Virginia to the Chowan River. (Pory was secretary of the Province of Virginia.) In 1629, Sir Robert Heath was granted a patent to settle Carolina. This patent embraced Gates County.

During the 1650s, colonists from Virginia started to move increasingly into the Albemarle Sound region. Colonel Drew and Roger Green led an expedition into the Albermarle area. In 1654, Francis Speight was granted a patent for 300 acres (1.2 km2) of land near Raynor Swamp. The first English settlement in Gates County was established near Corapeake, North Carolina in 1660. In 1670, Colonel Henry Baker of Nansemond County obtained a grant of land for 2,400 acres (9.7 km2) near Buckland. In 1672, George Fox, leader of the Quakers, visited Gates County. He described the county as barren.

Following the English colonists' defeat of the remaining Chowanoke in 1676, the following year, they created a Chowanoke Indian Reservation, the first within the present-day United States. It was established at the Chowanoke settlement between Bennett's Creek and Catherine Creek in Gates. From 1684–1722 Gates County was a part of the Chowan precinct. In 1711, the Society for the Propagation of the Gospel established an Anglican school for Chowanoke and local Native Americans at Sarum, with Mr. Marshburn as the teacher.

In 1738, settlers created a mail route from Suffolk, Virginia to Corapeake and Edenton, North Carolina. The stage coach route crossed the Chowan River at Barfield.

In 1825, Marquis de Lafayette passed through Gates County and was entertained at Pipkin's Inn. The town of Gatesville was incorporated in 1830. The old courthouse located on Court St. was built in 1836. The oldest item in the courthouse is the Federal-style bell, which was purchased in 1781.

William Paul Roberts, who would become the youngest Confederate general to serve in the American Civil War, was born in Gatesville, 1841. According to the 1850 census, there were 717 farms in Gates County and only 15 produced cotton. In 1851, Reynoldson Academy was established. Organized by free blacks, New Hope Baptist church was established in 1859. In 1878, Jethro Goodman introduced peanuts into Gates County. Secretary of State Thad Eure was born in 1899.

The Cross Canal, or Hamburg Ditch, three miles (5 km) south of the Virginia line, was Gates County's water route to the major port of Norfolk. Opened 1805–1822, it ran straight east for ten miles (16 km) through the Dismal Swamp, from a landing on Daniels Road in Gates County to the Dismal Swamp Canal. The Dismal Swamp Canal Welcome Center is now located there.[5] The Cross Canal is no longer a through route. In the late 20th century, sportsmen in small boats still used the Gates County end, at the site of Hamburg, to enter the swamp. Hurricanes since then toppled huge trees across it, blocking all access to the canal.

Survival in Gates County prior to the American Civil War required self-reliance. Most of the land in Gates County was covered with virgin timber. The mostly subsistence farmers did not hold many slaves.

A. J. Walton was the Gates County representative to the North Carolina secession convention. Soon after, the "Gates Guard" was the first company raised in the County to protect its borders. The second company was "Gates Minutemen". Thanks to the productivity of its agriculture, Gates County helped supply food to the Confederate States of America. General William P. Roberts from the county was the youngest general of the Civil War. Brigadier General Laurence S. Baker, a native of Gates County, lost an arm.

Jack Fairless, another county native, formed a band known as the "Buffaloes" (later Company E, 1st Regiment of North Carolina Union Volunteers). Made up of draft dodgers, Confederate deserters, and renegades from both sides, the Buffaloes raided homes throughout the area. With the able bodied men off fighting the war, the only people left behind were women, children, and old men unit to be soldiers. Fairless had an easy time terrorizing them. Fairless had originally been a Confederate soldier, but he been dishonorably discharged for stealing. He was eventually killed by his own men in self-defense.

Fort Dillard was built as a Confederate fort in the county. The story of the "Ellis Girls" was long told in the county. One day while fishing in the Chowan River, the sisters spotted a Union gunboat on its way to burn Winton. Union soldiers seized the girls and held them prisoners on the gunboat until they finished burning the town. Only then were they released, unharmed but very frightened.

On May 9, 1925 the first bridge opened across the Chowan River between Gates and Hertford counties. In 1925, Hwy 158 opened between Gates and Pasquotank through the Great Dismal Swamp. In 1935, the Sunbury Ruritan Club was established, the first and oldest in the state.

In 1973 A.B. Coleman donated 925 acres (3.74 km2) of land in the Millpond to the state. This was the beginning of Merchants Millpond State Park. In 1984 a bad tornado struck Gates County, killing two people and causing between $500 thousand and $5 million USD worth of damage. Hurricane Floyd hit Gates County in 1999.

In September 2007 Gates County was chosen as a potential site for a US Navy landing field in the northeastern part of the state. 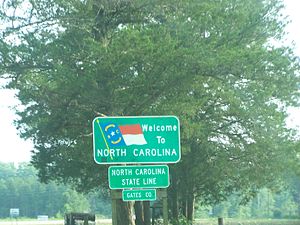 A welcome sign at the NC state line on U.S. 13 is visible in this shot.

The counties of Gates, Perquimans, Camden and Currituck contain sixty percent of the Great Dismal swamp.[7] In 1973, Union Camp donated the land which it owned in the swamp to the Nature Conservancy. The Conservancy next donated the land to the Department of The Interior, and the Great Dismal Swamp National Wildlife Refuge was created. The refuge consists of 107,000 acres (430 km2) of swamp and wetlands' surrounding Lake Drummond.[8]

Gates County is a member of the Albemarle Commission regional council of government. The Gates County Sheriff's Department consists of less than 15 deputies that maintain order in the county. Gates County has five volunteer fire departments with six fire stations, and one EMS station consisting of paid and volunteer members.

Gates County is divided into five districts. Each district elects a member to the Board of Commissioners. Each of the five districts contain a polling place where members of that district go to vote. The five districts are Gatesville, Eure, Gates, Sunbury, and Hobbsvile.

Mary C. (Cathy) Horton is the current Register of Deeds for Gates County. She in position is elected by the people of Gates County for a term of four years. The land deeds date back to 1779, with provided land plots for taxation reasons. Birth and Death Records in Gates County date back to 1913. And also for the veterans in the county, Gates County office provides military discharge papers. Marriage License are issued under the following provisions; Aged 16 to 18 must have parent consent, under the age 16 must have approval by judge, and 18 to 21 must show birth certificate. The Gates County office also issues Deeds of Trust which is when a bank loans you money and you put up your home for payments.

Most of Gates County's revenue comes from property taxes on personal property, with a small percentage coming from commercial sources.

The main industries are agriculture and forest products. Heritage tourism and recreation are increasing in importance.

Rosenwald Schools were schools set up by money from the Rosenwald Fund. This fund was created in 1917 by Julius Rosenwald to encourage construction of schools for rural black children, mostly in the South, who were underserved. The fund required communities to raise matching funds, including the use of public money and the support of school boards. At the time, the school boards were run by whites and the schools were segregated. Blacks had been disfranchised throughout the South, so services for them were typically underfunded. Black communities strongly supported the schools, raising money, and sometimes contributing land and labor. The schools were built to model designs developed by architects at Tuskegee University, a historically black college. The Rosenwald Fund stimulated the construction of more than 4,977 schools and related structures for African-American children before its depletion in 1948.

Seven Rosenwald Schools built in communities in Gates County. In some areas, such schools have been converted to community centers and other uses.[16] 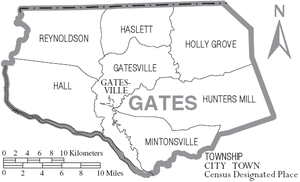