From Infogalactic: the planetary knowledge core
Jump to: navigation, search
For the real-world place (a suburb of Liverpool) of the same pronunciation, see Gateacre.

Gattaca is a 1997 American science fiction film written and directed by Andrew Niccol. It stars Ethan Hawke and Uma Thurman, with Jude Law, Loren Dean, Ernest Borgnine, Gore Vidal, and Alan Arkin appearing in supporting roles.[2] The film presents a biopunk vision of a future society driven by eugenics where potential children are conceived through genetic manipulation to ensure they possess the best hereditary traits of their parents.[3] The film centers on Vincent Freeman, played by Hawke, who was conceived outside the eugenics program and struggles to overcome genetic discrimination to realize his dream of traveling into space.

The movie draws on concerns over reproductive technologies which facilitate eugenics, and the possible consequences of such technological developments for society. It also explores the idea of destiny and the ways in which it can and does govern lives. Characters in Gattaca continually battle both with society and with themselves to find their place in the world and who they are destined to be according to their genes.

The film's title is based on the first letters of guanine, adenine, thymine, and cytosine, the four nucleobases of DNA.[4] It was a 1997 nominee for the Academy Award for Best Art Direction and the Golden Globe Award for Best Original Score.

The film flopped at the box office, but it received generally positive reviews and has since gained a cult following.

In "the not-too-distant future", eugenics is common. A genetic registry database uses biometrics to classify those so created as "valids" while those conceived by traditional means and more susceptible to genetic disorders are known as "in-valids". Genetic discrimination is illegal, but in practice genotype profiling is used to identify valids to qualify for professional employment while in-valids are relegated to menial jobs.

Vincent Freeman is conceived without the aid of genetic selection; his genetics indicate a high probability of several disorders and an estimated life span of 30.2 years. His parents, regretting their decision, use genetic selection to give birth to their next child, Anton. Growing up, the two brothers often play a game of "chicken" by swimming out to sea with the first one returning to shore considered the loser; Vincent always loses. Vincent dreams of a career in space travel but is reminded of his genetic inferiority. One day Vincent challenges Anton to a game of chicken and bests him before Anton starts to drown. Vincent saves Anton and then leaves home.

Vincent works as an in-valid, cleaning office spaces including that of Gattaca Aerospace Corporation, a space-flight conglomerate. He gets a chance to pose as a valid by using hair, skin, blood and urine samples from a donor, Jerome Eugene Morrow, who is a former swimming star paralyzed due to a car accident.[5] With Jerome's genetic makeup, Vincent gains employment at Gattaca, and is assigned to be navigator for an upcoming trip to Saturn's moon Titan. To keep his identity hidden, Vincent must meticulously groom and scrub down daily to remove his own genetic material, and pass daily DNA scanning and urine tests using Jerome's samples.

Gattaca becomes embroiled in controversy when one of its administrators is murdered a week before the flight. The police find a fallen eyelash of Vincent's at the scene. An investigation is launched to find the murderer, Vincent being the top suspect. Through this, Vincent becomes close to a co-worker, Irene Cassini, and falls in love with her. Though a valid, Irene has a higher risk of heart failure that will prevent her from joining any deep space Gattaca mission. Vincent also learns that Jerome's paralysis is by his own hand; after coming in second place in a swim meet, Jerome threw himself in front of a car. Jerome maintains that he was designed to be the best, yet wasn't, and that is the source of his suffering.

Vincent repeatedly evades scrutiny from the investigation, and it is revealed that Gattaca's mission director was the killer, as the administrator was threatening to cancel the mission. Vincent learns the identity of the detective who closed the case, his brother Anton, who has become aware of Vincent's presence. The brothers meet, and Anton warns Vincent that what he is doing is illegal, but Vincent asserts that he has gotten to this position on his own merits. Anton challenges Vincent to one more game of chicken. As the two swim out in the dead of night, Anton is surprised at Vincent's stamina, and Vincent reveals that his trick to winning was not saving energy for the swim back. Anton turns back and begins to drown, but Vincent rescues him and swims them both back to shore using celestial navigation.

On the day of the launch, Jerome reveals that he has stored enough DNA samples for Vincent to last two lifetimes upon his return, and gives him an envelope to open once in flight. After saying goodbye to Irene, Vincent prepares to board but discovers there is a final genetic test, and he currently lacks any of Jerome's samples. He is surprised when Dr. Lamar, the person in charge of background checks, reveals that he knows Vincent has been posing as a valid. Lamar admits that his son looks up to Vincent and wonders if his son, genetically selected but "not all that they promised", could break the limits just as Vincent has. He passes Vincent as a valid. As the rocket launches, Jerome dons his swimming medal and burns himself in his home's incinerator; Vincent opens the note from Jerome to find only a lock of Jerome's hair attached to it. Vincent muses on this, stating "For someone who was never meant for this world, I must confess, I’m suddenly having a hard time leaving it. Of course, they say every atom in our bodies was once a part of a star. Maybe I'm not leaving; maybe I'm going home." 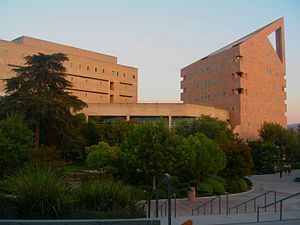 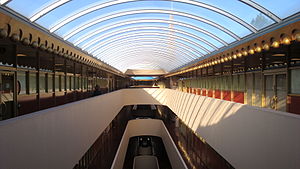 The exteriors (including the roof scene), and some of the interior shots, of the Gattaca complex were filmed at Frank Lloyd Wright's 1960 Marin County Civic Center in San Rafael, California.[6] The parking lot scenes were shot at the Otis College of Art and Design, distinguished by its punch card-like windows, located near LAX in Los Angeles. The exterior of Vincent Freeman's house was shot at the CLA Building on the campus of California State Polytechnic University, Pomona (Cal Poly Pomona). Other exterior shots were filmed at the bottom of the spillway of the Sepulveda Dam and outside the The Forum in Inglewood. The solar power plant mirrors sequence was filmed at the Kramer Junction Solar Electric Generating Station.

The movie uses a swimming treadmill in the opening minutes to punctuate the swimming and futuristic themes.[7] The futuristic turbine cars are based on 1960s car models like Rover P6, Citroën DS19 and Studebaker Avanti,[8] and futuristic buildings represent modern architecture of the 1950s.

Gattaca was released in theaters on October 24, 1997, and opened at number 5 at the box office; trailing I Know What You Did Last Summer, The Devil's Advocate, Kiss the Girls, and Seven Years in Tibet.[10] Over the first weekend the film brought in $4.3 million. It ended its theatrical run with a domestic total of $12.5 million against a reported production budget of $36 million.[11]

Gattaca was released on DVD on July 1, 1998,[12] and was also released on Superbit DVD.[13] Special Edition DVD and Blu-ray versions were released on March 11, 2008.[14][15] Both editions contain a deleted scene featuring historical figures like Einstein, Lincoln, etc., who according to the texts are supposedly genetically deficient.[11]

Gattaca received positive reviews from critics; the film received an 82% "fresh" rating from Rotten Tomatoes, based on 55 reviews, with a rating average of 7.1/10. The critical consensus states that "Intelligent and scientifically provocative, Gattaca is an absorbing sci fi drama that poses important interesting ethical questions about the nature of science."[16] On Metacritic, the film received "generally favorable reviews" with a score of 64 out of 100.[17] Roger Ebert stated, "This is one of the smartest and most provocative of science fiction films, a thriller with ideas."[18] James Berardinelli praised it for "energy and tautness" and its "thought-provoking script and thematic richness."[19]

Despite critical acclaim, Gattaca was not a box office success but it is said to have crystallized the debate over the controversial topic of human genetic engineering.[20][21][22] The film's dystopian depiction of "genoism" has been cited by many bioethicists and laymen in support of their hesitancy about, or opposition to, eugenics and the societal acceptance of the genetic-determinist ideology that may frame it.[23] In a 1997 review of the film for the journal Nature Genetics, molecular biologist Lee M. Silver stated that "Gattaca is a film that all geneticists should see if for no other reason than to understand the perception of our trade held by so many of the public-at-large".[24]

In 2004, bioethicist James Hughes criticized the premise and influence of the film Gattaca,[25] arguing that:

The score for Gattaca was composed by Michael Nyman, and the original soundtrack was released on October 21, 1997.[26]

On October 30, 2009, Variety reported that Sony Pictures was developing a television adaptation of the feature film as a one-hour police procedural set in the future. The show was to be written by Gil Grant, who has written for 24 and NCIS.[27]

U.S. Senator Rand Paul (R-KY) used near-verbatim portions of the plot summary from the Wikipedia entry on Gattaca in a speech at Liberty University on October 28, 2013 supporting Virginia Attorney General Ken Cuccinelli's campaign for Governor of Virginia. Paul accused pro-choice politicians of advocating eugenics in a manner similar to the events in Gattaca.[28][29]

Jon Frauley. 2010. "Biopolitics and the Governance of Genetic Capital in Gattaca." Criminology, Deviance and the Silver Screen: The Fictional Reality and the Criminological Imagination. New York: Palgrave Macmillan.