From Infogalactic: the planetary knowledge core
Jump to: navigation, search
For other uses, see Gaucho (disambiguation). 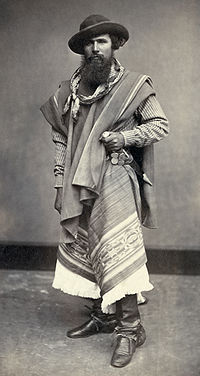 Portrait of a gaucho from Argentina photographed in Peru, 1868.

Gaucho (Spanish: [ˈɡautʃo]) or gaúcho (Portuguese: [ɡaˈuʃu]) is a word with several meanings. In its historical sense a gaucho was "A mestizo who, in the 18th and 19th centuries, inhabited Argentina, Uruguay and Rio Grande do Sul in Brazil".[1] Today, in Argentina and Uruguay, a gaucho is simply "A country person, experienced in traditional cattle ranching work".[2] Because historical gauchos were reputed to be brave, if unruly, the word is also applied metaphorically to mean "Noble, brave and generous",[3] but also "One who is skilful in subtle tricks, crafty".[4] In Portuguese the word gaúcho (note the accent) means "An inhabitant of the plains of Rio Grande do Sul or the pampas of Argentina descended from European man and [Amer]Indian woman who devotes himself to lassoing and raising cattle and horses".[5]

The gaucho is a national symbol in both Argentina and Uruguay. Gauchos became greatly admired and renowned in legends, folklore and in literature and became an important part of their regional cultural tradition. Beginning late in the 19th century, after the heyday of the gauchos, they were celebrated by South American writers.

There are several hypotheses concerning the origin of the term. It may derive from the Spanish term chaucho (in turn derived from Arabic chauia which means herdsman). The first recorded use of the term dates to Argentine independence in 1816. Another scenario indicates the word may derive from the Portuguese gaudério, which was designated to the inhabitants of the vast regions of Rio Grande do Sul and Río de la Plata in the 18th century or the Portuguese garrucho that points to an instrument used by the gauchos to trap and hamstring cattle. The 18th century chronicler Alonso Carrió de la Vandera speaks of "Gauderios" when it mentions the Gauchos or "Huasos" as poorly dressed men. 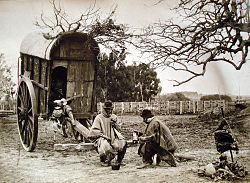 Gauchos drinking mate and playing the guitar in the Argentine Pampas. 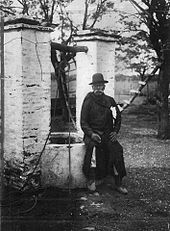 The gaucho plays an important symbolic role in the nationalist feelings of this region, especially that of Argentina, Paraguay, and Uruguay. The epic poem Martín Fierro by José Hernández (considered by some[6] the national epic of Argentina) used the gaucho as a symbol against corruption and of Argentine national tradition, pitted against Europeanising tendencies. Martín Fierro, the hero of the poem, is drafted into the Argentine military for a border war, deserts, and becomes an outlaw and fugitive. The image of the free gaucho is often contrasted to the slaves who worked the northern Brazilian lands. Further literary descriptions are found in Ricardo Güiraldes' Don Segundo Sombra. Like the North American cowboys, as discussed in Richard W. Slatta, Cowboys of the Americas, gauchos were generally reputed to be strong, honest, silent types, but proud and capable of violence when provoked. The gaucho tendency to violence over petty matters is also recognized as a typical trait. Gauchos' use of the famous "facón" (large knife generally tucked into the rear of the gaucho sash) is legendary, often associated with considerable bloodletting. Historically, the facón was typically the only eating instrument that a gaucho carried.

Also like the cowboy, as shown in Richard W. Slatta, Cowboys of the Americas, gauchos were and remain proud and great horseriders. Typically, a gaucho's horse constituted most of what he owned in the world. During the wars of the 19th century in the Southern Cone, the cavalries on all sides were composed almost entirely of gauchos. In Argentina, gaucho armies such as that of Martín Miguel de Güemes, slowed Spanish advances. Furthermore, many caudillos relied on gaucho armies to control the Argentine provinces.

The gaucho diet was composed almost entirely of beef while on the range, supplemented by yerba mate (erva mate in Portuguese), an herbal infusion made from the leaves of the yerba tree, a type of holly rich in caffeine and nutrients.

Gauchos[7] dressed quite distinctly from North American cowboys, and used bolas or boleadoras - in Portuguese boleadeiras - (three leather bound rocks tied together with approximately three feet long leather straps) in addition to the familiar "North American" lariat or riata. The typical gaucho outfit would include a poncho (which doubled as a saddle blanket and as sleeping gear), a facón (large knife), a rebenque (leather whip), and loose-fitting trousers called bombachas, belted with a tirador, or a chiripá, a loincloth. During winters, gauchos wore heavy wool ponchos to protect against cold.

Gaúcho is also the common denomination of the current inhabitants of the Brazilian State of Rio Grande do Sul.

Gauchito (a boy in the Argentine colors and a gaucho hat) was the mascot for the 1978 FIFA World Cup.