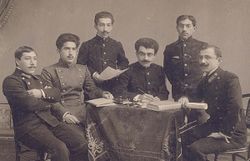 Musabekov (left) while he was studying in Kiev.

Gazanfar Mahmud oglu Musabekov or Musabeyov (Azerbaijani: Qəzənfər Mahmud oğlu Musabəyov, 14 July 1888, Perebidil, Quba region - 9 February 1938, Baku province) was an Azerbaijani Bolshevik revolutionary and Soviet statesman. He was Chairman of the Central Executive Committee of Azerbaijan SSR from 1929 to 1931 and he headed the government of the Transcaucasian SFSR from 1931 to 1936. During the Great Purge, Musabekov was arrested (June 1937), accused of plotting against the Soviet state, sentenced to death and executed on 9 February 1938.

An Azerbaijani cargo ship is named after him.