pronunciation (help·info), born 30 August 1951) is a Lithuanian politician who was Prime Minister of Lithuania from 2006 to 2008. He was confirmed by the Seimas on 4 July 2006 after Zigmantas Balčytis, the provisional Prime Minister, failed to gather the required support from the parliament.[1] He stepped down on 27 November 2008 after the 2008 parliamentary elections, and gave way to Andrius Kubilius to start his term as the prime minister.

Kirkilas was born in Vilnius in 1951. After returning from mandatory military service, from 1972 to 1978 he worked on several cultural monuments (e.g. churches or the Verkiai Palace) restoring their interior and especially rolled gold and moldeling. In 1978–1982 he studied political science. After graduation, he joined the Communist Party of Lithuania and took various posts there. When Algirdas Brazauskas was appointed the secretary of the party, Kirkilas became his press secretary.

Since independence was declared on 11 March 1990, Kirkilas was involved in the state matters and was elected five times (in 1992, 1996, 2000, 2004 and 2008) to the Seimas under the Social Democratic Party of Lithuania ballot. He was appointed the Minister of National Defence of Lithuania on 7 December 2004.

In 2004, he received an MBA from the International Business School in Vilnius.

In January 2007 he was praised in The Economist as an unsung hero whose "minority administration has surpassed all expectations".[2] 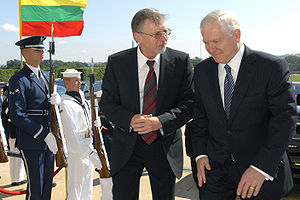 In July 2007, Kirkilas signed the protocol assigning the members of newly formed governmental workgroup to assist the energy company „Lietuvos energija“ in negotiating and consulting with potential foreign partners for a new Ignalina nuclear power plant project. A public turmoil followed after occurrence of lt (Darius' Jurgelevičius) name in the list of the work group. After the so-called State Security Departament scandal in 2006, when a senior officer Vytautas Pociūnas died under controversial circumstances in a hotel in Belarus; the witnesses described Darius Jurgelevičius as a middleman transmitting then Lithuanian Foreign Ministry's clerk Albinas's Januška influence to State Security Departament. Albinas Januška currently works as G. Kirkilas's advisor.[3]

In July 2007, before handing his powers to his successors, lt (Vidmantas Jankauskas) the chairman of the State Price and Energy Control Commission spoke about the ties between gas companies and the Prime Minister Kirkilas, saying: "a gas company „Lietuvos dujos“ is privately lobbying G. Kirkilas and the second Lithuanian monopilist gas company lt (Dujotekana) – Ministry of Economics. CEO of Lietuvos dujos, Viktoras Valentukevičius, meets Kirkilas privately to play tennis".[3]

In October 2014, Fair Observer featured an interview with Kirkilas where he spoke on his pro-nuclear energy stance and said the President Dalia Grybauskaite's foresight in constructing Lithuania's power plant lacked "strategic thinking".