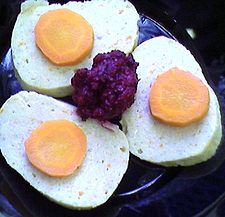 Gefilte fish (/ɡəˈfɪltə fɪʃ/; from Yiddish: געפֿילטע פֿיש‎, "stuffed fish", cognate with German gefüllte Fische) is an Ashkenazi Jewish dish made from a poached mixture of ground deboned fish, such as carp, whitefish, or pike, which is typically eaten as an appetizer.

Although the dish historically consisted of a minced-fish forcemeat stuffed inside the fish skin, as its name implies, since the 19th century the skin has commonly been omitted and the seasoned fish is formed into patties similar to quenelles or fish balls. They are popular on Shabbat and holidays such as Passover, although they may be consumed throughout the year.

Traditionally, carp, pike, mullet, or whitefish were used to make gefilte fish, but more recently other fish with white flesh such as Nile perch have been used, and there is a pink variation using salmon. There are even vegetarian variations.[1]

Fish fillets are ground with eggs, onion, bread or matza crumbs, and spices to produce a paste or dough which is then boiled in fish stock.[2]

The resulting mixture is sliced, and usually served cold or at room temperature. Often, each slice is topped with a slice of carrot, with a horseradish mixture called khreyn on the side.

Due to the previous general poverty of the Jewish population in Europe and especially Eastern Europe, where the dish originated, an economical recipe for the above also may have included extra ground and soaked matza meal or bread crumbs, thus creating extra fish balls. This form of preparation eliminated the need for picking out fish bones at the table, and "stretched" the (expensive) fish further, so that even poor, large families could enjoy fish on Shabbat. Not only is picking bones religiously prohibited on the Sabbath, but many of the commonly used fish such as carp are exceptionally bony and difficult to eat easily in whole form. The fish bones can be used in making the fish stock.

Gefilte fish may be slightly sweet or savory. Preparation of gefilte fish with sugar or black pepper is considered an indicator of whether a Jewish community was Galitzianer (with sugar) or Litvak (with pepper); the boundary separating northern from southern East Yiddish has thus been dubbed "the Gefilte Fish Line".[3]

The post-WW2 method of making gefilte fish commercially takes the form of patties or balls, or utilizes a wax paper casing around a "log" of ground fish, which is then poached or baked. This product is sold in cans and glass jars, and packed in jelly made from fish broth. Sodium is a relatively high 220–290 mg/serving. Low-salt, low-carbohydrate, low-cholesterol, sugar-free, and kosher varieties are available. The U.S. Patent #3,108,882 "Method for Preparing an Edible Fish Product" for this jelly, which allowed mass-market distribution of gefilte fish, was granted on October 29, 1963 to Monroe Nash and Erich G. Freudenstein.[4] Gefilte fish are also sold frozen in "logs".

Among religiously observant Jews, gefilte fish has become a traditional Shabbat food to avoid borer, which is one of the 39 activities prohibited on Shabbat outlined in the Shulchan Aruch. Borer, literally "selection/choosing", would occur when one picks the bones out of the fish, taking "the chaff from within the food".[5] This interpretation, and the solution to it, however, are of relatively recent origin. Jews had been eating fish at least since the first century CE, and there is no mention of fish-eating in the famous communal ordinances against laxity in Sabbath observance.[6]

A less common belief is that fish are not subject to ayin hara ("evil eye") because they are submerged while alive, so that a dish prepared from several fish varieties brings good luck.[7]

Fish is parve, neither milk nor meat, and, according to kosher law, it may be eaten at both meat and dairy meals, although according to halakha fish and meat should not be eaten together.