From Infogalactic: the planetary knowledge core
Jump to: navigation, search
For other uses, see Gela (disambiguation).

Gela (Italian pronunciation: [ˈdʒɛːla]; Ancient Greek: Γέλα[1]), is an ancient town (among the oldest continually inhabited in southern Italy) and comune in the province of Caltanissetta in the south of Sicily, Italy. The city is located about 84 kilometres (52 miles) from the city of Caltanissetta, on the Mediterranean Sea. The city has a larger population than the provincial capital, and ranks second in land area. As of 2011 its population was 77,360.[2]

The city was founded around 688 BC by colonists from Rhodes and Crete, 45 years after the founding of Syracuse. The city was named after the river Gela. The Greeks had many colonies in the south of what is now Italy, and for many centuries the Greeks had a major influence on the area. Gela flourished and, after only a century, a group of Geloi founded the colony of Agrigento. The expansion, however, led to economic and social strain, which led the plebs to leave the city and settle in nearby Maktorion. However, the revolt was opposed by the high priest of Diana and the exiled plebs returned to Gela.

For over a century no further mention is made about the internal politics of the city, until the ancient historians note that a tyrant, Cleander, ruled Gela between 505 BC and 498 BC. After his death, power transferred to his brother Hippocrates, who conquered Callipoli, Leontini, Naxos, Hergetios and Zancles (present-day Messina). Only Syracuse, with the help of her former colonizing city, Corinth and Corcyra, managed to escape the Gelese expansion. When Camarina, a Syracusan colony, rebelled in 492 BC, Hippocrates intervened to wage war against Syracuse. After having defeated the Syracusan army at the Heloros river, he besieged the city. However, in the end he was convinced to retreat in exchange for possession of Camarina. The tyrant lost his life in 491 in a battle against the Siculi, the native Sicilian people.

Hippocrates was succeeded by Gelo, who, in 484, conquered Syracuse and moved his seat of government there. His brother Hiero was given control over Gela. When Theron of Agrigento conquered Himera and a Carthaginian army disembarked in Sicily to counter him, he asked for help from Gela and Syracuse. Gelo and Hiero were victorious in the subsequent battle of Himera, in which the Carthaginian leader Hamilcar lost his life.

After the death of Gelo (478 BC), Hiero moved to Syracuse, leaving Gela to Polyzelos. Thenceforth the history of the city becomes uncertain: it has been suggested that the citizens freed themselves from the rule of tyrants and established a democratic government.

Many of the Geloi returned from Syracuse in this period, and the city regained part of its power: Aischylos died in this city in 456 BC. Gela was at the head of the Sicilian league that pushed back the Athenian attempt to conquer the island in 415 BC (see Sicilian Expedition).

In 406 the Carthaginians conquered Agrigento and destroyed it. Gela asked for the help of Dionysius I of Syracuse. However, for unknown reasons, the latter did not arrive in time and, after heroic deeds, Gela was ruined and its treasures sacked (405). The survivors took refuge in Syracuse. In 397 they returned home and joined Dionysius II in his struggle for freedom from the invaders, and in 383 BC they saw their independence acknowledged.

Under Agathocles (317-289 BC) the city suffered again for internal strife between the general population and the aristocrats. When the Carthaginians arrived in 311 BC, they met little resistance and captured the city with the help of the aristoi. In 282 BC Phintias of Agrigento, who had founded a city next to present-day Licata, ruthlessly destroyed Gela to crush its power forever.[3] However, this assertion seems to be refuted by a careful reading of the sources that would recognize the Mamertines as the real destroyers of the city, five years earlier, in 287 BC.[4]

The city subsequently disappeared from the chronicles. Under Roman rule, a small settlement still existed, which is mentioned by Virgil, Pliny the Elder, Cicero, and Strabo. Later it was a minor Byzantine center. Under the Arabs, it was known as the "City of Columns".

The later city was founded in AD 1233 by Frederick II by the name Terranova, by which it remained known until 1928. The new settlement was west of the ancient Gela, and was provided with a castle and a line of walls. Terranova, also known as Heracles, was a royal possession until 1369, when King Frederick III of Aragon gave it to Manfredi III Chiaramonte. In 1401, however, it was confiscated after the treason of Andrea Chiaramonte, and assigned to several Aragonese feudataries. In 1530 the title of Marquis of Terranova was created for Giovanni Tagliavia Aragona, and in 1561 his son Carlo obtained the title of Duke. The Terranova Aragona held the city until 1640, when the marriage of Giovanna Tagliavia Aragona and Ettore Pignatelli give the possession to the latter's family. The Pignatelli held the fief until 1812.

Renamed Terranova di Sicilia, in 1927 the city was renamed Gela.

During the Allied invasion of Sicily in World War II, the US 1st Infantry Division, with the 82nd Armored Reconnaissance Battalion, landed on the beaches during the initial assault on July 9, 1943. The Allied forces repelled an Italian and German armored counterattack at Gela.[5] Several advanced landing airfields were built by United States Army engineers in the area around the city which was used by the Twelfth Air Force during the Italian Campaign.

After the war, a large oil refinery was built in Gela's territory, as a part of Enrico Mattei's industrial expansion plan. This was to help the economy of the region, but instead it caused significant damage to the area's visual appearance and touristic appeal. The chaotic building program, which was carried out in the absence of a planning process, created almost intractable social problems.

In the 1980s, the area saw the increasing power of a mafioso association, Stidda, which was the perpetrator of a long series of violence and homicides. In December 2001, as part of a large anti-mafia operation led by the provincial carabinieri, 88 arrest warrants were carried out and a number of companies associated with Gela's Rinzivillo mafia clan were seized under suspicion of money laundering and drug trafficking. The strong mafia influence in the city is partly responsible for Gela's lack of tourism, with attempts to invest in the local tourism industry (through the creation of hotels etc.) being repeatedly, and mysteriously, blocked. 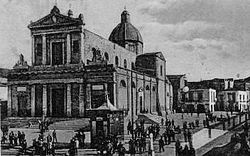 The Cathedral in an early 20th-century photograph. 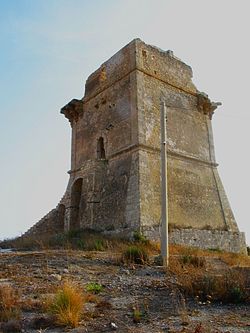 Recently a development and recovery program has slightly improved the situation of the city. The universities of Catania and Palermo have opened faculties in Gela, and the historical center, as well as the archaeological area, the seaside, and the Castelluccio have been renovated.

Gela is situated on the Mediterranean coast at the estuary of Gela river, in the south-western side of Sicily, between Agrigento and Ragusa. The bounding municipalities are Acate, Butera, Caltagirone, Mazzarino and Niscemi. Its frazione is the coastal village of Manfria.

Gela has a borderline semi-arid climate (Köppen: BSk) and a Mediterranean climate (Köppen: Csa) and receives just enough precipitation to avoid it being classified as semi-arid. Winters are mild and rainy while summers are dry and warm though cooler than inland locations owing to the proximity of the sea, which moderates temperatures.

Gela is twinned with: