From Infogalactic: the planetary knowledge core
Jump to: navigation, search
This article is about the four-star rank. For the broader U.S. military usage, see General officers in the United States. For other uses, see General (disambiguation).

U.S. Army, U.S. Air Force, and U.S. Marine Corps four-star insignia of the rank of General. Style and method of wear may vary between the services.

Army Service Uniform shoulder strap with the rank of General 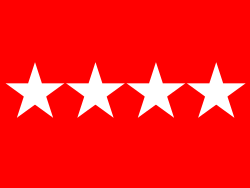 Rank flag of an army general; the Marine Corps equivalent has 4 stars in a circular manner; the Air Force equivalent has a blue background rather than red.

There are several exceptions to these limits allowing more than allotted within the statute:

The President may add four-star slots to one service if they are offset by removing an equivalent number from other services.[2] Finally, all statutory limits may be waived at the President's discretion during time of war or national emergency.[6]

Four-star grades go hand-in-hand with the positions of office to which they are linked, so these ranks are temporary.[7] Their rank expires with the expiration of their term of office, which is usually set by statute.[7] Generals are nominated for appointment by the President from any eligible officers holding the rank of brigadier general or above who meet the requirements for the position, under the advice of the Secretary of Defense, service secretary (Secretary of the Army, Secretary of the Navy, or Secretary of the Air Force), and if applicable the Joint Chiefs of Staff.[7] For some positions, statute allows the President to waive those requirements for a nominee deemed to serve national interests.[8] The nominee must be confirmed via majority vote by the United States Senate before the appointee can take office and thus assume the rank.[7] Four-star ranks may also be given by act of Congress but this is extremely rare. The standard tour length for most four-star positions is three years, bundled as a two-year term plus a one-year extension, with the following exceptions:

Extensions of the standard tour length can be approved, within statutory limits, by their respective service secretaries, the Secretary of Defense, the President, and/or Congress but these are rare, as they block other officers from being promoted. Some statutory limits under the U.S. Code can be waived in times of national emergency or war.

General officers typically retire well in advance of the statutory age and service limits, so as not to impede the career paths of more junior officers. Since only a limited number of four-star slots are available to each service, typically one officer must leave office before another can be promoted.[11] Maintaining a four-star rank is a game of musical chairs; once an officer vacates a position bearing that rank, he or she has no more than 60 days to be appointed or reappointed to a position of equal or greater importance before he or she must involuntarily retire.[7][11] Historically, officers leaving four-star positions were allowed to revert to their permanent two-star ranks to mark time in lesser jobs until statutory retirement, but now such officers are expected to retire immediately to avoid obstructing the promotion flow.

To retire at four-star grade, an officer must accumulate at least three years of satisfactory active duty service in that grade, as certified by the Secretary of Defense.[12] The Secretary of Defense may reduce this requirement to two years, but only if the officer is not being investigated for misconduct. Officers who do not meet the service-in-grade requirement revert to the next highest grade in which they served satisfactorily for at least six months. It is extraordinarily rare for a four-star officer not to retire in that grade.

Four-star officers typically step down from their posts up to 60 days in advance of their official retirement dates. Officers retire on the first day of the month, so once a retirement month has been selected, the relief and retirement ceremonies are scheduled by counting backwards from that date by the number of days of accumulated leave remaining to the retiring officer. During this period, termed transition leave or terminal leave, the officer is considered to be awaiting retirement but still on active duty.