John Forbes (5 September 1707 – 11 March 1759) was a British general in the French and Indian War. He is best known for leading the Forbes Expedition that captured the French outpost at Fort Duquesne and for naming the city of Pittsburgh, Pennsylvania after British Secretary of State William Pitt the Elder.

Forbes was born on his family's Pittencrieff Estate in Dunfermline, Fife, Scotland in 1707, the son of an army officer. After beginning to study medicine, he decided in his second year as a student to become a soldier and was accepted and commissioned as a lieutenant in the Scots Greys in 1735. He saw action in the War of the Austrian Succession and in the Jacobite rising of 1745, serving under the Duke of Cumberland as acting quartermaster-general.

When the French and Indian War (called the Seven Years' War in Europe) broke out, Forbes was sent to the fighting in the New World. His first action in North America came in 1757 when he was dispatched to reinforce an attack on the French fortress of Louisburg in what is now Nova Scotia.

In December 1757, he was promoted to brigadier general and assigned to command an expedition to capture Fort Duquesne, which guarded the vital forks of the Ohio River. General Edward Braddock had tried and failed to capture the fort in 1755, with disastrous consequences for both the British army and Braddock himself, who was mortally wounded in a bloody engagement nine miles short of the objective. Lt. Colonel George Washington, who had been a member of Braddock’s campaign, accompanied the expedition, serving at the fore of one of the Virginia provincial regiments. A Swiss-born colonel of the Royal American Regiment, Henry Bouquet, served as Forbes' second-in-command. 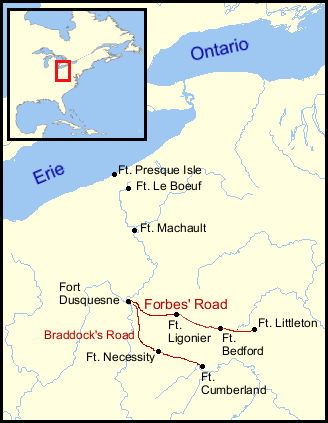 In the summer of 1758, Forbes began his campaign to capture Fort Duquesne. His plan was to complete slow and methodical march to Fort Duquesne, taking great pains to secure his lines of supply and communication with a string of forts along a newly constructed road from the Pennsylvania frontier. Rather than move on Fort Duquesne via Braddock’s road, which began in western Maryland, Forbes began his march in eastern Pennsylvania. This decision led to major political infighting among the Pennsylvanians and Virginians in his expedition. Both colonies claimed the Ohio River country. Forbes was able to quell the dissent by agreeing to improve Braddock's original road, but travel the route through Pennsylvania, which was longer but required fewer river crossings. This also gave the tactical advantage of forcing the French to divide their assets and defend both approaches.

With just under 7,000 regular and provincial troops, Forbes began his push from his main stores in Carlisle, Pennsylvania into the trackless wilderness of western Pennsylvania. West of Raystown (now Bedford, Pennsylvania) he cut a wagon road over the Allegheny Mountains, later known as Forbes Road, building a series of fortifications such as the fort at Raystown and Fort Ligonier to serve as supply depots.

Forbes authorized a reconnaissance in force. In the Battle of Fort Duquesne, on 15 September 1758, the advance column under Major James Grant was bloodily defeated by French and Indian warriors who sallied from the fort in greater numbers than Grant anticipated, upsetting his deliberate (and likely overreaching) plan to set an ambush for his enemy. With this defeat, Forbes decided to wait until the spring to attack.

In the fall of 1758, Conrad Weiser arbitrated a council at Easton, Pennsylvania, during which the tribes in the Ohio Valley agreed to abandon the French. This collapse of Native American support was a factor in the French decision to abandon Fort Duquesne.

Soon after his decision to wait, Forbes received word that the French garrison at Fort Frontenac had fallen and that Fort Duquesne had been largely evacuated. Forbes decided to launch an immediate attack on the weakened fort. Forbes divided his command into three columns in preparation to make the final assault on the fortress. But the French, who were now hopelessly outnumbered, abandoned and razed Fort Duquesne before the British arrived.

Forbes occupied the burned fort on 25 November 1758. He immediately ordered the construction of a new fortification to be named Fort Pitt, after British Secretary of State William Pitt the Elder. He also named the settlement between the rivers "Pittsburgh,"[1] which is the location of modern Pittsburgh, Pennsylvania.

Forbes’s health, which had been poor for much of the campaign, began a rapid decline during his occupation of Fort Pitt. On 3 December 1758, now gravely ill with what has been described as "a wasting disease", Forbes began the arduous journey back to Philadelphia leaving Colonel Hugh Mercer in command of Fort Pitt. General Forbes died in Philadelphia on 11 March 1759. He was buried in Christ Church in Philadelphia.[2]

Forbes Field, which served as the home field for the Pittsburgh Pirates, Pittsburgh Steelers and the Pitt Panthers football team, was named after John Forbes. Also Forbes Avenue running from the Ohio River in Downtown Pittsburgh to Frick Park and the start of the eastern suburbs is named in his honor and roughly follows his colonial road.[3]