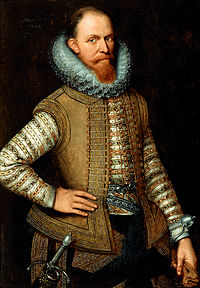 General admiral was a Danish, Dutch, German, Russian, Portuguese, Spanish and Swedish naval rank. Its historic origin is a title high military or naval dignitaries of early modern Europe sometimes held, for example the (nominal) commander-in-chief of the Dutch Republic's navy (usually the Prince of Orange).

In 1943, a directive was issued that should the Oberbefehlshaber der Kriegsmarine ("commander of the navy") hold the rank of Generaladmiral, he would wear the sleeve insignia of a grand admiral, but the shoulder boards of a Generaladmiral.

A similar practice was used in the German Army, allowing colonel generals to wear four pips on the shoulder board when engaged in duties befitting a field marshal.

The rank of Generaladmiral was first given to the future grand admiral Erich Raeder on 20 April 1936.

Other holders of the rank were:

Notably, Karl Dönitz was promoted to grand admiral without becoming a Generaladmiral first.

General-admiral (Russian: Генера́л-адмира́л) was the highest rank of the Russian Navy as established by the Table of Ranks and equivalent to field marshal. This was purely an honorific rank and for much of its existence, it was awarded only to a person on active duty, usually for the head of the naval department, and typically a descendant of the Romanov royal family.

There were only nine holders of this rank:

The general admiral rank was abolished with the fall of the Empire and was not revived when rank distinctions were reintroduced during 1935-40. The rank of admiral of the fleet of the Soviet Union can be considered as a modern equivalent.

Almirante general is a rank in the Spanish Navy that is above an admiral, but subordinate to a captain general.

Almirante-general was the highest rank in the Portuguese Navy, from 1808 to 1812 and again, from 1892 to 1910. It was the naval equivalent to the rank of marechal-general ("general field marshal") of the Portuguese Army.

The rank was initially introduced in 1808, to be assigned to the commander-in-chief of the navy. The almirante-general had similar functions to those of the former capitão-general da armada (captain general of the navy) which had been extinguished in 1796 and whose functions passed to the Board of the Admiralty. The rank was only given to Infante Pedro Carlos de Bragança, being extinguished when he died in 1812.

"Admiral General" Aladeen from The Dictator is a parody of leaders who appoint themselves grandoise military ranks.sv:Amiral#Sveriges amiralgeneraler