Although Italy has been a favorite subject for numerous population genetic studies, genetic patterns have never been analyzed comprehensively, including uniparental and autosomal markers throughout the country.[1]

Not all of these various peoples were linguistically or ethnically closely related. Some of them spoke Italic languages, and others belonged to another Indo-European branch (Ligurian, Venetic, Lepontic) or were non-Indo-European (Etruscan, Raetic).

In 2008, Dutch geneticists determined that Italy is one of the last two remaining genetic islands in Europe (the other being Finland.) This is due in part to the presence of the Alpine mountain chain which, over the centuries, has prevented large migration flows aimed at colonizing the Italian lands.[2] 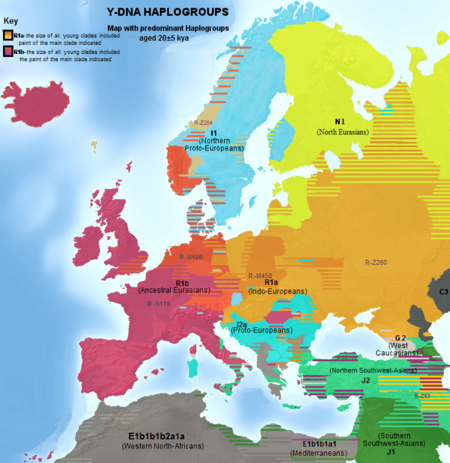 The majority of Italians, Sicilians and Corsicans belong to Haplogroup R1b, common in Western and Central Europe. The highest frequency of R1b is found in Garfagnana (~ 80%), Tuscany. This percentage lowers at the extreme south of Italy in Sicily (30%). The majority of Sardinians belong to Mesolotich European haplogroup I2a1a.[5][6]

A 2004 study by Semino et al. contradicted this study, and showed that Italians in North-central regions (like Tuscany and Emilia-Romagna) had a higher concentration of J2 than their Southern counterparts. North-central had 26.9% J2, whereas Calabria (a far Southern region) had 20.0%, Sardinia had 9.7% and Sicily had 16.7%.[10]

Migrations that occurred on Italian soil from the fall of the Western Roman Empire until 1000 AD have probably not significantly altered the gene pool of the Italian people.[11][page needed] Despite the lengthy Goth and Lombard presence in Italy, it is estimated that the I1 haplogroup associated with the Germanic peoples is only present among Italians in the north in the order of 2-3% and from 1 to 1.5% among Italians in the south.[11]

In Sicily, further migrations from the Vandals, Normans and Saracens have only slightly affected the ethnic composition of the Sicilian people. However, Greek genetic influence is high in Sicily, at almost 37%. Norman civilization proliferated for several centuries on the island, with a strong impact on the culture of the place and different populations as Normans, Bretons, Anglo-Saxons, Swabians and Lombards have repopulated the island with a male contribution around 8% (haplogroup I). The Norman Kingdom of Sicily was created in 1130, with Palermo as capital, and would last until the 19th century. Nowadays it is in north-west Sicily, around Palermo and Trapani, that Norman Y-DNA is the most common, with 8 to 15% of the lineages belonging to haplogroup I. In the thirteenth century Frederick II turned against the Muslims in Sicily (during the preceding century most had converted to Catholicism) and between 1221 and 1226 he moved all to the city of Lucera in Puglia. Ultimately, the North African male contribution to Sicily was estimated 6%.[12][13]

A 2015 genetic study of six small mountain villages in eastern Lazio and one mountain community in nearby western Abruzzo found some genetic similarities between these Central Italian communities and Near Eastern populations, mainly in the male genetic pool. The Y haplogroup Q, common in Western Asia and Central Asia, was also found among this Central Italian sample population, suggesting possible past Anatolian genetic influence .[14]

In Italy as elsewhere in Europe the majority of mtdna lineages belong to the haplogroup H. Several independent studies conclude that haplogroup H probably evolved in West Asia c. 25,000 years ago. It was carried to Europe by migrations c. 20-25,000 years ago, and spread with population of the southwest of the continent.[15][16] Its arrival was roughly contemporary with the rise of the Gravettian culture. The spread of subclades H1, H3 and the sister haplogroup V reflect a second intra-European expansion from the Franco-Cantabrian region after the last glacial maximum, c. 13,000 years ago.[15][17]

African Haplogroup L lineages are relatively infrequent (less than 1%) throughout Italy with the exception of Latium, Volterra, Basilicata and Sicily where frequencies between 2 and 3% have been found.[18]

A study in 2012 by Brisighelli "et al." stated that an analysis of ancestral informative markers "as carried out in the present study indicated that Italy shows a very minor sub-Saharan African component that is, however, slightly higher than non-Mediterranean Europe." Discussing sub-Saharan African mtDNAs the study states that these indicate that a significant proportion of these lineages could have arrived in Italy more than 10,000 years ago; therefore, their presence in Europe does not necessarily date to the time of the Roman Empire, the Atlantic slave trade or to modern migration."[1] These mtDNAs by Brisighelli "et al." were reported with the given results as "Mitochondrial DNA haplotypes of African origin are mainly represented by haplogroups M1 (0.3%), U6 (0.8%) and L (1.2%)" for the 583 samples tested.[1]

Close genetic similarity between Ashkenazi Jews and Italians has been noted in genetic studies.[21][22][23][24][25][26][27] A 2010 study of Jewish genealogy found that with respect to non-Jewish European groups, the population most closely related to Ashkenazi Jews are modern-day Italians, followed by the French and Sardinians.[28][29]

The contribution in rebuilding Europe's mtDNA

Recent studies have shown that Italy has played an important role in the recovery of 'Western Europe" at the end of the Last glacial period. The study focused mitochondrial U5b3 haplogroup discovered that this female lineage had in fact originated in Italy and that then expanded from the Peninsula around 10,000 years ago towards Provence and the Balkans. In Provence, probably between 9,000 and 7,000 years ago, it gave rise to the haplogroup subclade U5b3a1. This subclade U5b3a1 later came from Provence to the island of Sardinia by obsidian merchants, as it is estimated that 80% of obsidian found in France comes from Monte Arci in Sardinia reflecting the close relations that were at the time of these two regions. Still about 4% of the female population in Sardinia belongs to this haplotype.[30]

By using the ADMIXTURE software, the authors obtained at K = 4 the lowest cross-validation error. The HapMap CEU individuals showed an average Northern Europe (NE) ancestry (light green) of 83%. A similar pattern is observed in French, Northern Italian and Central Italian populations with a NE ancestry of 70%, 56% and 52% respectively (Figure 3). According to the PCA plot, also in the ADMIXTURE analysis there are relatively small differences in ancestry between Northern Italians and Central Italians while Southern Italians showed a lower average admixture NE proportion (43,6%) than Northern and Central Italy, and a higher Middle East ancestry (light blue) of 28%. The Sardinian samples display a pattern of crimson common to the others European populations but at a higher frequency (70.4%).