From Infogalactic: the planetary knowledge core
Jump to: navigation, search
Not to be confused with Geneva Protocol or Convention relating to the Status of Refugees. 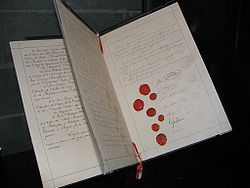 The Geneva Conventions comprise four treaties, and three additional protocols, that establish the standards of international law for the humanitarian treatment of war. The singular term Geneva Convention usually denotes the agreements of 1949, negotiated in the aftermath of the Second World War (1939–45), which updated the terms of the first three treaties (1864, 1906, 1929), and added a fourth. The Geneva Conventions extensively defined the basic rights of wartime prisoners (civilians and military personnel); established protections for the wounded and sick; and established protections for the civilians in and around a war-zone. The treaties of 1949 were ratified, in whole or with reservations, by 196 countries.[1] Moreover, the Geneva Convention also defines the rights and protections afforded to non-combatants, yet, because the Geneva Conventions are about people in war, the articles do not address warfare proper—the use of weapons of war—which is the subject of the Hague Conventions (First Hague Conference, 1899; Second Hague Conference 1907), and the bio-chemical warfare Geneva Protocol (Protocol for the Prohibition of the Use in War of Asphyxiating, Poisonous or other Gases, and of Bacteriological Methods of Warfare, 1925). 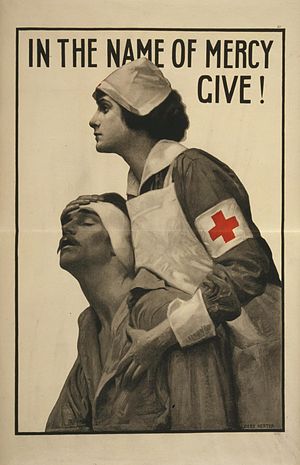 The Swiss businessman Henry Dunant went to visit wounded soldiers after the Battle of Solferino in 1859. He was shocked by the lack of facilities, personnel, and medical aid available to help these soldiers. As a result, he published his book, A Memory of Solferino, in 1862, on the horrors of war.[2] His wartime experiences inspired Dunant to propose:

The former proposal led to the establishment of the Red Cross in Geneva. The latter led to the 1864 Geneva Convention, the first codified international treaty that covered the sick and wounded soldiers in the battlefield. For both of these accomplishments, Henry Dunant became corecipient of the first Nobel Peace Prize in 1901.[3][4]

The ten articles of this first treaty were initially adopted on August 22, 1864 by twelve nations.[5] Clara Barton was instrumental in campaigning for the ratification of the 1864 Geneva Convention by the United States, which eventually ratified it in 1882.[6]

The second treaty was first adopted in the Geneva Convention for the Amelioration of the Condition of the Wounded and Sick in Armies at Sea, concluded on July 6, 1906 and specifically addressed members of the Armed Forces at sea.[7] It was continued in the Geneva Convention relative to the Treatment of Prisoners of War, concluded on July 27, 1929 and entered into effect on June 19, 1931.[8] Inspired by the wave of humanitarian and pacifistic enthusiasm following World War II and the outrage towards the war crimes disclosed by the Nuremberg Trials, a series of conferences were held in 1949 reaffirming, expanding and updating the prior three Geneva Conventions and adding a new elaborate Geneva Convention relative to the Protection of Civilian Persons in Time of War.

Despite the length of these documents, they were found over time to be incomplete. In fact, the very nature of armed conflicts had changed with the beginning of the Cold War era, leading many to believe that the 1949 Geneva Conventions were addressing a largely extinct reality:[9] on the one hand, most armed conflicts had become internal, or civil wars, while on the other, most wars had become increasingly asymmetric. Moreover, modern armed conflicts were inflicting an increasingly higher toll on civilians, which brought the need to provide civilian persons and objects with tangible protections in time of combat, thus bringing a much needed update to the Hague Conventions of 1899 and 1907. In light of these developments, two Protocols were adopted in 1977 that extended the terms of the 1949 Conventions with additional protections. In 2005, a third brief Protocol was added establishing an additional protective sign for medical services, the Red Crystal, as an alternative to the ubiquitous Red Cross and Red Crescent emblems, for those countries that find them objectionable. 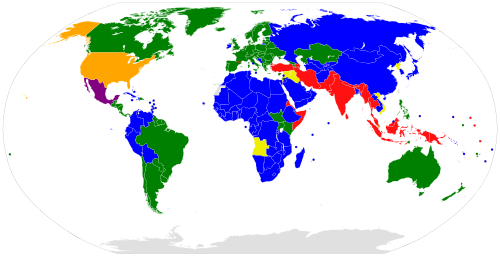 In diplomacy, the term convention does not have its common meaning as an assembly of people. Rather, it is used in diplomacy to mean an international agreement, or treaty. The first three Geneva Conventions were revised, expanded, and replaced, and the fourth one was added, in 1949.

The 1949 conventions have been modified with three amendment protocols:

This article states that the Geneva Conventions apply to all cases of international conflict, where at least one of the warring nations have ratified the Conventions. Primarily:

Article 1 of Protocol I further clarifies that armed conflict against colonial domination and foreign occupation also qualifies as an international conflict.

When the criteria of international conflict have been met, the full protections of the Conventions are considered to apply.

This article states that the certain minimum rules of war apply to armed conflicts that are not of an international character, but that are contained within the boundaries of a single country. The applicability of this article rests on the interpretation of the term armed conflict.[12] For example, it would apply to conflicts between the Government and rebel forces, or between two rebel forces, or to other conflicts that have all the characteristics of war but that are carried out within the confines of a single country. A handful of individuals attacking a police station would not be considered an armed conflict subject to this article, but only subject to the laws of the country in question.[12]

The other Geneva Conventions are not applicable in this situation but only the provisions contained within Article 3,[12] and additionally within the language of Protocol II. The rationale for the limitation is to avoid conflict with the rights of Sovereign States that were not part of the treaties. When the provisions of this article apply, it states that:[25]

The final international tribunal for all issues related to the Geneva Conventions and other treaties is the United Nations Security Council. As a charter, the UN Charter is a constituent treaty, and all members are bound by its articles. The UN Charter's Article 25 and others[26] require that obligations to the United Nations prevail over all other treaty obligations. The UNSC rarely invokes its authority regarding the Geneva Conventions and so most issues are resolved by regional treaties or by national law. If none are present or inviable in a conflict, the convention might possibly be unenforced.

Not all violations of the treaty are treated equally. The most serious crimes are termed grave breaches, and provide a legal definition of a war crime. Grave breaches of the Third and Fourth Geneva Conventions include the following acts if committed against a person protected by the convention:

Also considered grave breaches of the Fourth Geneva Convention are the following:

Nations who are party to these treaties must enact and enforce legislation penalizing any of these crimes.[28][irrelevant citation] Nations are also obligated to search for persons alleged to commit these crimes, or persons having ordered them to be committed, and to bring them to trial regardless of their nationality and regardless of the place where the crimes took place.[citation needed]

The principle of universal jurisdiction also applies to the enforcement of grave breaches when the UN Security Council asserts its authority and jurisdiction from the UN Charter to apply universal jurisdiction. The UNSC did this when they established the International Criminal Tribunal for Rwanda and the International Criminal Tribunal for the former Yugoslavia to investigate and/or prosecute alleged violations.

Although warfare has changed dramatically since the Geneva Conventions of 1949, they are still considered the cornerstone of contemporary international humanitarian law.[29] They protect combatants who find themselves hors de combat, and they protect civilians caught up in the zone of war. These treaties came into play for all recent international armed conflicts, including the War in Afghanistan (2001–2014),[30] the 2003 invasion of Iraq, the invasion of Chechnya (1994–present),[31] and the 2008 War in Georgia. The Geneva Conventions also protect those affected by non-international armed conflicts such as the Syrian Civil War.[dubious – discuss]

The lines between combatants and civilians have blurred when the actors are not exclusively High Contracting Parties (HCP).[32] Since the fall of the Soviet Union, an HCP often is faced with a non-state actors,[33] as argued by General Wesley Clark in 2007.[34] Examples of such conflict include the Sri Lankan Civil War, the Sudanese Civil War, and the Colombian Armed Conflict, as well most military engagements of the US since 2000.

Some scholars hold that Common Article 3 deals with these situations, supplemented by Protocol II (1977).[dubious – discuss] These set out minimum legal standards that must be followed for internal conflicts. International tribunals, particularly the International Criminal Tribunal for the former Yugoslavia (ICTY), have clarified international law in this area.[35] In the 1999 Prosecutor v. Dusko Tadic judgement, the ICTY ruled that grave breaches apply not only to international conflicts, but also to internal armed conflict.[dubious – discuss] Further, those provisions are considered customary international law, allowing war crimes prosecution by the United Nations and its International Court of Justice over groups that have signed and have not signed the Geneva Conventions.

Controversy has arisen over the US designation of irregular opponents as "unlawful enemy combatants" (see also unlawful combatant) especially in the SCOTUS judgments over the Guantanamo Bay brig facility Hamdi v. Rumsfeld, Hamdan v. Rumsfeld and Rasul v. Bush,[36] and later Boumediene v. Bush. President George W. Bush, aided by Attorneys-General John Ashcroft and Alberto Gonzales and General Keith B. Alexander, claimed the power, as Commander in Chief of the Armed Forces, to determine that any person, including an American citizen, who is suspected of being a member, agent, or associate of Al Qaeda, the Taliban, or possibly any other terrorist organization, is an “enemy combatant” who can be detained in U.S. military custody until hostilities end, pursuant to the international law of war.[37][38][39]

The application of the Geneva Conventions to the 2014 conflict in Ukraine (Crimea) is a troublesome problem because some of the personnel who engaged in combat against the Ukrainians were not identified by insignia, although they did wear military-style fatigues.[40] American pilots in Operation Southern Watch were documented to bear no insignia, so as to gain some illusory intelligence advantage.[40] The types of comportment qualified as acts of perfidy under jus in bello doctrine are listed in Articles 37 through 39 of the Geneva Convention; the prohibition of fake insignia is listed at Article 39.2, but the law is silent on the complete absence of insignia. The status of POW captured in this circumstance remains a question.

Educational institutions and organizations including Harvard University,[41][42] The International Committee of the Red Cross,[43] and The Rohr Jewish Learning Institute use the Geneva Convention as a primary text investigating torture and warfare.[44]