From Infogalactic: the planetary knowledge core
(Redirected from Genitalia)
Jump to: navigation, search 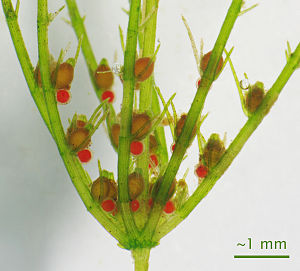 The sex organs of a green alga, Chara are the male antheridia (red) and female archegonia (brown).

The Latin term genitalia, sometimes anglicized as genitals, is used to describe the externally visible sex organs, known as primary genitalia or external genitalia: in male mammals, the penis and scrotum; and in female mammals, the clitoris and vulva.

The other, hidden sex organs are referred to as the secondary genitalia or internal genitalia. The most important of these are the gonads, a pair of sex organs, specifically the testes in the male or the ovaries in the female. Gonads are the true sex organs, generating reproductive gametes containing inheritable DNA. They also produce most of the primary hormones that affect sexual development, and regulate other sexual organs and sexually differentiated behaviors.

In general zoology, given the great variety in organs, physiologies, and behaviors involved in copulation, male genitalia are more strictly defined as "all male structures that are inserted in the female or that hold her near her gonopore during sperm transfer"; female genitalia are defined as "those parts of the female reproductive tract that make direct contact with male genitalia or male products (sperm, spermatophores) during or immediately after copulation".[5]

In placental mammals, females have two genital orifices, the vagina and urethra, while males have only one, the urethra.[6] Male and female genitals have many nerve endings, resulting in pleasurable and highly sensitive touch.[7][8] In most human societies, particularly in conservative ones, genitals are considered a public indecency and sometimes even illegal if left uncovered in public.[9]

In mammals, sex organs include:

In typical prenatal development, sexual organs originate from a common anlage anatomy during early gestation and differentiate into male or female variations. The SRY gene, usually located on the Y chromosome and encoding the testis determining factor, determines the direction of this differentiation. The absence of it allows the gonads to continue to develop into ovaries.

Thereafter, the development of the internal reproductive organs and the external genitalia is determined by hormones produced by certain fetal gonads (ovaries or testes) and the cells' response to them. The initial appearance of the fetal genitalia (a few weeks after conception) looks basically feminine: a pair of "urogenital folds" with a small protuberance in the middle, and the urethra behind the protuberance. If the fetus has testes, and if the testes produce testosterone, and if the cells of the genitals respond to the testosterone, the outer urogenital folds swell and fuse in the midline to produce the scrotum; the protuberance grows larger and straighter to form the penis; the inner urogenital swellings grow, wrap around the penis, and fuse in the midline to form the penile urethra.

Each sexual organ in one sex has a homologous counterpart in the other one. See a list of homologues of the human reproductive system. In a larger perspective, the whole process of sexual differentiation also includes development of secondary sexual characteristics such as patterns of pubic and facial hair and female breasts that emerge at puberty. Furthermore, differences in brain structure arise, affecting, but not absolutely determining, behavior.

Intersex is the development of genitalia somewhere between typical male and female genitalia. Once the child is born, the parents are faced with decisions that are often difficult to make, such as whether or not to modify the genitalia, assign the child as male or female, or leave the genitalia as is. Some parents allow their doctors to choose. If they do decide to modify the genitalia, they have approximately a 50% chance of getting genitalia that will match the child's gender identity. If they pick the wrong one, their child may begin to show symptoms of transsexualism, which can lead them to a life of discomfort until they are able to remedy the issue.[10]

Because of the strong sexual selection affecting the structure and function of genitalia, they form an organ system that evolves faster that any other.[11] A great variety of genital form and function may therefore be found among animals.

Sexual reproduction in flowering plants involves the union of the male and female germ cells, sperm and egg cells respectively. Pollen is produced in stamens, and is carried to the pistil, which has the ovary at its base where fertilization can take place. Within each pollen grain is a male gametophyte which consists of only three cells. In most flowering plants the female gametophyte within the ovule consists of only seven cells. Thus there are no sex organs as such.