From Infogalactic: the planetary knowledge core
Jump to: navigation, search
For the novel by Ben Aaronovitch, see Genius Loci (novel). For the short story by Clark Ashton Smith, see Genius Loci and Other Tales. 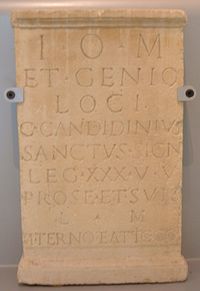 In classical Roman religion, a genius loci was the protective spirit of a place. It was often depicted in religious iconography as a figure holding attributes such as a cornucopia, patera (libation bowl) or snake. Many Roman altars found throughout the Western Roman Empire were dedicated to a particular genius loci. The Roman imperial cults of the Emperor and the imperial house developed in part in connections with the sacrifices made by neighborhood associations (vici) to the local genius. These 265 local districts[1] had their cult organised around the Lares Compitales (guardian spirits or lares of the crossroads), which the emperor Augustus transformed into Lares Augusti along with the Genius Augusti.[2] The Emperor's genius is then regarded as the genius loci of the Roman Empire as a whole.

Roman examples of these Genii can be found, for example, at the church of St. Giles, Tockenham, Wiltshire where the genius loci is depicted as a relief in the wall of a Norman church built of Roman material. This shows "a youthful and curly-haired Roman Genius worked in high relief, holding a cornucopia in his left hand and a patera in his right', which previously has been "erroneously identified as Asclepius".[3]

Alexander Pope made the Genius Loci an important principle in garden and landscape design with the following lines from Epistle IV, to Richard Boyle, Earl of Burlington:

Consult the genius of the place in all;
That tells the waters or to rise, or fall;
Or helps th' ambitious hill the heav'ns to scale,
Or scoops in circling theatres the vale;
Calls in the country, catches opening glades,
Joins willing woods, and varies shades from shades,
Now breaks, or now directs, th' intending lines;
Paints as you plant, and, as you work, designs.

Pope's verse laid the foundation for one of the most widely agreed principles of landscape architecture. This is the principle that landscape designs should always be adapted to the context in which they are located.

A priori, archetype, and genius loci are the primary principals of Neo-Rationalism or New Rationalism. Pioneered by the Italian architect Aldo Rossi, Neo-Rationalism developed in the light of a re-evaluation of the work of Giuseppe Terragni, and gained momentum through the work of Giorgio Grassi. Characterized by elemental vernacular forms and an adaption to the existing environment, the Neo-Rationalist style has adherents beyond architecture in the greater world of art.

In the context of modern architectural theory, genius loci has profound implications for place-making, falling within the philosophical branch of "phenomenology". This field of architectural discourse is explored most notably by the theorist Christian Norberg-Schulz in his book, Genius Loci: Towards a Phenomenology of Architecture.

In modern works of fantasy, such as Dungeons and Dragons or The Dresden Files, a genius loci is an intelligent spirit or magical power that resides in a place. Very few genius loci of this form are able to move from their native area, either because they are "part of the land" or because they are bound to it. Genius loci are usually portrayed as being extremely powerful and usually also very intelligent, though there is a great deal of variability on these points. Some versions are nearly omnipotent and omniscient inside the area they inhabit, while others are simply vast, semi-sentient wellsprings of magical energy. This power almost never extends beyond the border of the genius loci.

Different settings give different explanations for the existence of genius loci. In most cases, however, the intelligent, magical entity simply develops from the similarly named "spirit of place" over a great deal of time. In other settings, genius loci are formed by powerful magical events, and in others they are the results of ley lines, mana pools, or an equivalent.