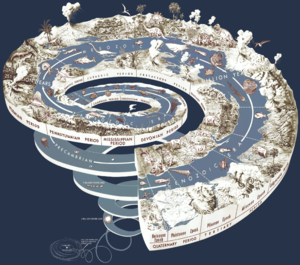 Geochronology is the science of determining the age of rocks, fossils, and sediments using signatures inherent in the rocks themselves. Absolute geochronology can be accomplished through radioactive isotopes, whereas relative geochronology is provided by tools such as palaeomagnetism and stable isotope ratios. By combining multiple geochronological (and biostratigraphic) indicators the precision of the recovered age can be improved.

Geochronology is different in application from biostratigraphy, which is the science of assigning sedimentary rocks to a known geological period via describing, cataloguing and comparing fossil floral and faunal assemblages. Biostratigraphy does not directly provide an absolute age determination of a rock, but merely places it within an interval of time at which that fossil assemblage is known to have coexisted. Both disciplines work together hand in hand however, to the point where they share the same system of naming rock layers and the time spans utilized to classify layers within a stratum.

The science of geochronology is the prime tool used in the discipline of chronostratigraphy, which attempts to derive absolute age dates for all fossil assemblages and determine the geologic history of the Earth and extraterrestrial bodies.

By measuring the amount of radioactive decay of a radioactive isotope with a known half-life, geologists can establish the absolute age of the parent material. A number of radioactive isotopes are used for this purpose, and depending on the rate of decay, are used for dating different geological periods. More slowly decaying isotopes are useful for longer periods of time, but less accurate in absolute years. With the exception of the radiocarbon method, most of these techniques are actually based on measuring an increase in the abundance of a radiogenic isotope, which is the decay-product of the radioactive parent isotope.[2][3][4] Two or more radiometric methods can be used in concert to achieve more robust results.[5] Most radiometric methods are suitable for geological time only, but some such as the radiocarbon method and the 40Ar/39Ar dating method can be extended into the time of early human life[6] and into recorded history.[7]

Some of the commonly used techniques are:

Incremental dating techniques allow the construction of year-by-year annual chronologies, which can be fixed (i.e. linked to the present day and thus calendar or sidereal time) or floating.

A sequence of paleomagnetic poles (usually called virtual geomagnetic poles), which are already well defined in age, constitutes an apparent polar wander path (APWP). Such path is constructed for a large continental block. APWPs for different continents can be used as a reference for newly obtained poles for the rocks with unknown age. For paleomagnetic dating it is suggested to use the APWP in order to date a pole obtained from rocks or sediments of unknown age by linking the paleopole to the nearest point on the APWP. Two methods of paleomagnetic dating have been suggested (1) Angular method and (2) Rotation method.[9] First method is used for paleomagnetic dating of rocks inside of the same continental block. Second method is used for the folded areas where tectonic rotations are possible.

Global trends in isotope compositions, particularly Carbon 13 and strontium isotopes, can be used to correlate strata.[10] 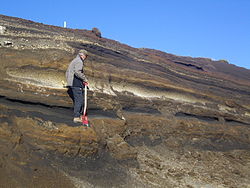 Tephra horizons in south-central Iceland. The thick and light-to-dark coloured layer at the height of the volcanologists hands is a marker horizon of rhyolitic-to-basaltic tephra from Hekla.

Marker horizons are stratigraphic units of the same age and of such distinctive composition and appearance, that despite their presence in different geographic sites, there is certainty about their age-equivalence. Fossil faunal and floral assemblages, both marine and terrestrial, make for distinctive marker horizons.[11] Tephrochronology is a method for geochemical correlation of unknown volcanic ash (tephra) to geochemically fingerprinted, dated tephra. Tephra is also often used as a dating tool in archaeology, since the dates of some eruptions are well-established.

Differences between chronostratigraphy and geochronology

It is important not to confuse geochronologic and chronostratigraphic units.[12] Geochronological units are periods of time, thus it is correct to say that Tyrannosaurus rex lived during the Late Cretaceous Epoch.[13] Chronostratigraphic units are geological material, so it is also correct to say that fossils of the genus Tyrannosaurus have been found in the Upper Cretaceous Series.[14] In the same way, it is entirely possible to go and visit an Upper Cretaceous Series deposit - such as the Hell Creek deposit where the Tyrannosaurus fossils were found - but it is naturally impossible to visit the Late Cretaceous Epoch as that is a period of time.