From Infogalactic: the planetary knowledge core
Jump to: navigation, search
This article is about the scientific field of study. For the American indie band, see Geographer (band). 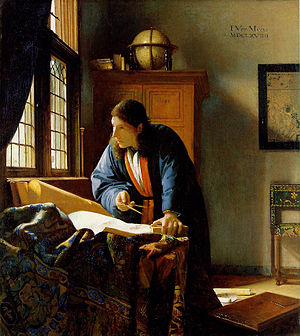 A geographer is a scholar whose area of study is geography, the study of Earth's natural environment and human society.

In particular, physical geographers study the natural environment while human geographers study human society. Modern geographers are the primary practitioners of the GIS (geographic information system), who are often employed by local, state, and federal government agencies as well as in the private sector by environmental and engineering firms.

There is a well-known painting by Johannes Vermeer titled The Geographer, which is often linked to Vermeer's The Astronomer. These paintings are both thought to represent the growing influence and rise in prominence of scientific enquiry in Europe at the time of their painting, 1668–69.

There are three major fields of study, which are further subdivided: