From Infogalactic: the planetary knowledge core
Jump to: navigation, search
For other uses, see Pole (disambiguation). 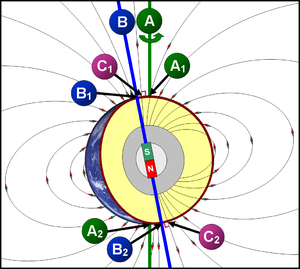 A geographical pole is either of the two points on a planet, dwarf planet or natural satellite, or a "large" rotating body or sphere where the body's axis of rotation intersects its surface. As with Earth's North and South Poles, they are usually called that body's "north pole" and "south pole", one lying 90 degrees in one direction from the body's equator and the other lying 90 degrees in the opposite direction from the equator.[1]

Every planet has geographical poles.[2] If, like the Earth, a body generates a magnetic field, it will also possess magnetic poles.[3]

Perturbations in a body's rotation mean that geographical poles wander slightly on its surface. The Earth's North and South Poles, for example, move by a few metres over periods of a few years.[4][5] As cartography requires exact and unchanging coordinates, the averaged[citation needed] locations of geographical poles are taken as fixed cartographic poles and become the points where the body's great circles of longitude intersect.