Cuba lies west of the North Atlantic Ocean, east of the Gulf of Mexico, south of the Straits of Florida, northwest of the Windward Passage, and northeast of the Yucatan Channel. The main island (Cuba) makes up most of the land area 104,556 km2 (40,369 sq mi).[1]

Cuba is the largest country by land area in the Caribbean. Its main island is the seventeenth-largest island in the world by land area. The island rises between the Atlantic Ocean and the Caribbean Sea. It is bordered on the north by the Straits of Florida, on the northeast by Nicholas Channel and the Old Bahama Channel. The southern part is bounded by the Windward Passage and the Cayman Trench, while the southwest lies in the Caribbean Sea. To the west, it reaches to the Yucatan Channel, and the northwest is open to the Gulf of Mexico.

More than 4,000 islands and cays are found in the surrounding sea and bays. The southern coast includes such archipelagos as Jardines de la Reina and the Canarreos. The northeastern shore is lined by the Sabana-Camagüey Archipelago, which includes Jardines del Rey and is composed of approximately 2,517 cays and islands.[2] The Colorados Archipelago is developed on the north-western coast.

Terrain is mostly flat to rolling plains, with rugged hills and mountains in the southeast. The lowest point is the Caribbean Sea at 0 m (sea level) and the highest point is Pico Turquino at 1,974 m (6,476 ft), part of the Sierra Maestra mountain range, located in the southeast of the island.

Other significant mountain ranges are Sierra Cristal in the southeast, Escambray Mountains in the center of the island, and Sierra del Rosario in the northwest. White sand beaches (most notably in Varadero[3]), as well as mangroves and marshes can be found in the coastal area. The largest is the Zapata Swamp, with over 4,520 km2 (1,750 sq mi).

Cuba has negligible inland water area. The largest natural water mirror is Laguna de Leche at 67.2 km2 (25.9 sq mi), while the man-made Zaza Reservoir, at 113.5 km2 (43.8 sq mi), is the largest inland water surface by area in the country.

Extreme points in Cuba are: 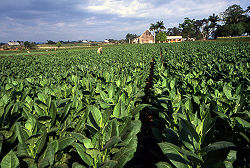 Natural resources include cobalt, nickel, iron ore, copper, salt, timber, silica, oil and petroleum. At one time, the whole island was covered with forests and there are still many cedar (Cedrela odorata), chechem (Metopium brownei), mahogany (Swietenia mahagoni), and other valuable trees. Large areas were cleared to grow more sugarcane, and so few trees remained that timber had to be imported.

The most important Cuban mineral economic resource is nickel. Cuba has the second largest nickel reserves in the world after Russia.[4] Sherritt International, a Canadian energy company, operates a large nickel mining facility in Moa, Cuba. Another leading mineral resource is cobalt, a byproduct of nickel mining operations. Cuba ranks as the fifth largest producer of refined cobalt in the world.

Petroleum is extracted on Cuba's northern shore, in the provinces of La Habana and Matanzas. Recent petroleum exploration has revealed that the North Cuba Basin could produce approximately 4.6 billion barrels (730,000,000 m3) to 9.3 billion barrels (1.48×109 m3) of petroleum. As of 2006, Cuba has now started to test-drill these locations for possible exploitation.[5][6][7] The petroleum is of low quality, and used for energy generation only.

Sugarcane was the most important part of the economy in Cuba's history, and is still grown on large areas. Extensive irrigation systems are developed in the south of Sancti Spíritus Province. Tobacco, used for some of the world's cigars, is grown especially in the Pinar del Río Province.

Cuba's climate is tropical and moderated by trade winds. The dry season lasts from November to April and the rainy season from May to October.

Cuba is an archipelago of islands located in the Caribbean Sea, with the geographic coordinates 21°3N, 80°00W. Cuba is the principal island, which is surrounded by four main groups of islands. These are the Colorados, the Sabana-Camagüey, the Jardines de la Reina and the Canarreos. The main island of Cuba constitutes most of the nation's land area or 104,556 km2 (40,369 sq mi) and is the seventeenth-largest island in the world by land area. The second largest island in Cuba is the Isla de la Juventud (Isle of Youth) in the southwest, with an area of 2,200 km2 (850 sq mi). Cuba has a total land area of 109,884 km2 (42,426 sq mi).

The main island consists mostly of flat to rolling plains. At the southeastern end is the Sierra Maestra, a range of steep mountains whose highest point is the Pico Real del Turquino at 1,974 metres (6,476 ft). The local climate is tropical, though moderated by trade winds. In general (with local variations), there is a drier season from November to April, and a rainier season from May to October. The average temperature is 23.1 °C (73.6 °F) in January and 27 °C (80.6 °F) in July.

Cuba lies in the path of hurricanes, and these destructive storms are most common in September and October. Havana is the largest city and capital; other major cities include Santiago de Cuba and Camagüey. Better known smaller towns include Baracoa which was the first Spanish settlement on Cuba, Trinidad, a UNESCO world heritage site, and Bayamo.

Cuba is divided into 15 Provinces and one special municipality (Isla de la Juventud). The provinces are further subdivided into level 3 subdivisions, called municipalities (Spanish: Municipios), of which there are 168 following the 2010 administrative redistribution.[9]

See also: Municipalities of Cuba and List of places in Cuba