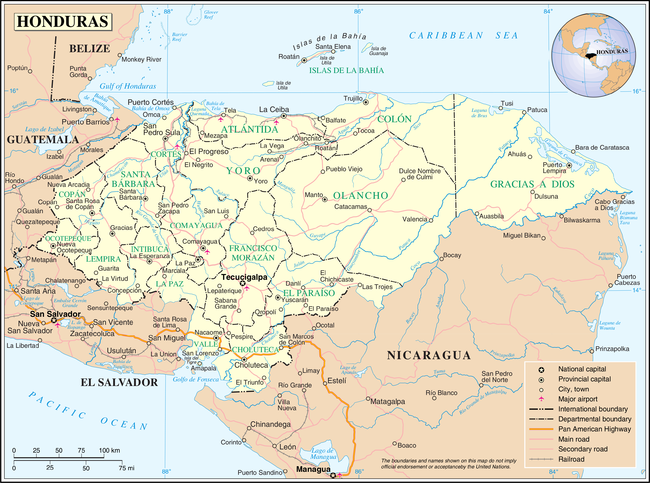 A map of Honduras.

Honduras is a country in Central America. Honduras borders the Caribbean Sea and the North Pacific Ocean. Guatemala lies to the west, Nicaragua south east and El Salvador to the south west. Honduras is the second largest Central American republic, with a total area of just over 112,090 square miles (290,300 km2).

Honduras has a 700 km Caribbean coastline extending from the mouth of the Río Motagua in the west to the mouth of the Río Coco in the east, at Cape Gracias a Dios. The 922 km southeastern side of the triangle is a land border with Nicaragua. It follows the Río Coco near the Caribbean Sea and then extends southwestward through mountainous terrain to the Gulf of Fonseca on the Pacific Ocean. The southern apex of the triangle is a 153 km coastline on the Gulf of Fonseca, which opens onto the Pacific Ocean. In the west there are two land borders: with El Salvador (342 km) and with Guatemala (256 km).

Honduras has three distinct topographical regions: an extensive interior highland area and two narrow coastal lowlands. The interior, which constitutes approximately 80 percent of the country's terrain, is mountainous. The larger Caribbean lowlands in the north and the Pacific lowlands bordering the Gulf of Fonseca are characterized by alluvial plains.

The interior highlands are the most prominent feature of Honduran topography. This mountain area makes up about 80% of the country's area, and is home to the majority of the population. Because the rugged terrain has made the land difficult to traverse and equally difficult to cultivate, this area has not been highly developed. The soil here is poor: Honduras lacks the rich volcanic ash found in other Central American countries. Until the early 20th century, the highland economy consisted primarily of mining and livestock.

In the west, Honduras' mountains blend into the mountain ranges of Guatemala. The western mountains have the highest peaks, with the Pico Congolón at an elevation of 2,500 m and the Cerro Las Minas at 2,850 m. The Honduran border with El Salvador crosses the peak of Cerro El Pital, the highest point in El Salvador at over 2700 m. These mountains are woodland covered with mainly pine forests.

In the east, the mountains merge with those in Nicaragua. Although generally not as high as the mountains near the Guatemalan border, the eastern ranges possess some high peaks, such as the Montaña de la Flor at 2,300 meters, El Boquerón (Monte El Boquerón) at 2,485 meters, and Pepe Bonito at 2,435 meters.

One of the most prominent features of the interior highlands is a depression that runs from the Caribbean Sea to the Gulf of Fonseca. This depression splits the country's cordilleras into eastern and western parts and provides a relatively easy transportation route across the isthmus. Widest at its northern end near San Pedro Sula, the depression narrows as it follows the upper course of the Río Humuya. Passing first through Comayagua and then through narrow passes south of the city, the depression widens again as it runs along the border of El Salvador into the Gulf of Fonseca.

Scattered throughout the interior highlands are numerous flatfloored valleys, 300 to 900 meters in elevation, which vary in size. The floors of the large valleys provide sufficient grass, shrubs, and dry woodland to support livestock and, in some cases, commercial agriculture. Subsistence agriculture has been relegated to the slopes of the valleys, with the limitations of small-sized holdings, primitive technology, and low productivity that traditionally accompany hillside cultivation. Villages and towns, including the capital, Tegucigalpa, are tucked in the larger valleys.

Vegetation in the interior highlands is varied. Much of the western, southern, and central mountains are open woodland;supporting pine forest interspersed with some oak, scrub, and grassy clearings. The ranges toward the east are primarily continuous areas of dense, broad-leaf evergreen forest. Around the highest peaks, remnants of dense rain forest that formerly covered much of the area are still found.

This area of river valleys and coastal plains, which most Honduras call "the north coast," or simply "the coast," has traditionally been Honduras's most exploited region. The central part of the Caribbean lowlands, east of La Ceiba, is a narrow coastal plain only a few kilometers wide.

To the east and west of this section the Caribbean lowlands widen and in places extend inland a considerable distance along broad river valleys. The broadest river valley, along the Río Ulúa near the Guatemalan border, is Honduras's most developed area. Both Puerto Cortés, the country's largest port, and San Pedro Sula, Honduras's industrial capital, are located here, as is La Ceiba, the third largest city in the country.

To the east, near the Nicaraguan border, the Caribbean lowlands broaden to an extensive area known as the Mosquitia. Unlike the western part of the Caribbean lowlands, the Mosquitia is Honduras's least-developed area. Underpopulated and culturally distinct from the rest of the country, the area consists of inland savannah with swamps and mangrove near the coast. During times of heavy rainfall, much of the savannah area is covered by shallow water, making transportation by means other than a shallow-draft boat almost impossible.

The smallest physiographic region of Honduras, the Pacific lowlands, is a strip of land averaging twenty-five kilometers wide on the north shore of the Gulf of Fonseca. The land is flat, becoming swampy near the shores of the gulf, and is composed mostly of alluvial soils washed down from the mountains. The gulf is shallow and the water rich in fish and mollusks. Mangroves along the shore make shrimp and shellfish particularly abundant by providing safe and abundant breeding areas amid their extensive networks of underwater roots.

Several islands in the gulf fall under Honduras's jurisdiction. The two largest, Zacate Grande and El Tigre, are eroded volcanoes, part of the chain of volcanoes that extends along the Pacific coast of Central America. Both islands have volcanic cones more than 700 meters in elevation that serve as markers for vessels entering Honduras's Pacific

Honduras controls a number of islands as part of its offshore territories. In the Caribbean Sea, the islands of Roatán (Isla de Roatán), Utila, and Guanaja together form Islas de la Bahía (Bay Islands), one of the eighteen departments into which Honduras is divided. Roatán, the largest of the three islands, is fifty kilometers long by five kilometers wide. The Islas de la Bahía archipelago also has a number of smaller islands, among them the islets of Barbareta (Isla Barbareta), Santa Elena (Isla Santa Elena), and Morat (Isla Morat).

Farther out in the Caribbean are the Islas Santanillas, formerly known as Swan Islands. A number of small islands and keys can be found nearby, among them Cayos Zapotillos and Cayos Cochinos. In the Gulf of Fonseca, the main islands under Honduran control are El Tigre, Zacate Grande (Isla Zacate Grande), and Exposición (Isla Exposición).

The climatic types of each of the three physiographic regions differ. The Caribbean lowlands have a tropical wet climate with consistently high temperatures and humidity, and rainfall fairly evenly distributed throughout the year. The Pacific lowlands have a tropical wet and dry climate with high temperatures but a distinct dry season from November through April. The interior highlands also have a distinct dry season, but, as is characteristic of a tropical highland climate, temperatures in this region decrease as elevation increases.

In the Pacific lowlands, April, the last month of the dry season, brings the warmest temperatures; the rainy season is slightly cooler, although higher humidity during the rainy season makes these months feel more uncomfortable. In the Caribbean lowlands, the only relief from the year-round heat and humidity comes during December or January when an occasional strong cold front from the north (a norte) brings several days of strong northwest winds and slightly cooler temperatures.

The interior highlands range from tierra templada to tierra fría. Tegucigalpa, in a sheltered valley and at an elevation of 1,000 meters (3,281 ft), has a pleasant climate, with an average high temperature ranging from 30 °C (86 °F) in April, the warmest month, to 25 °C (77 °F) in January, the coolest. Above 2,000 meters (6,562 ft), temperatures can fall to near freezing at night, and frost sometimes occurs.

Rain falls year round in the Caribbean lowlands but is seasonal throughout the rest of the country. Amounts are copious along the north coast, especially in the Mosquitia, where the average rainfall is 2,400 millimeters (94.5 in). Nearer San Pedro Sula, amounts are slightly less from November to April, but each month still has considerable precipitation. The interior highlands and Pacific lowlands have a dry season, known locally as "summer," from November to April. Almost all the rain in these regions falls during the "winter," from May to September. Total yearly amounts depend on surrounding topography; Tegucigalpa, in a sheltered valley, averages only 1,000 millimeters (39.4 in) of precipitation.

Honduras lies within the hurricane belt, and the Caribbean coast is particularly vulnerable to hurricanes or tropical storms that travel inland from the Caribbean. Hurricane Francelia in 1969 and Tropical Storm Alleta in 1982 affected thousands of people and caused extensive damage to crops. Hurricane Fifi in 1974 killed more than 8,000 and destroyed nearly the entire banana crop.

In 1998 Hurricane Mitch became the most deadly hurricane to strike the Western Hemisphere in the last two centuries. This massive hurricane not only battered the Honduran coastline, but engulfed nearly the entire country with its powerful winds and torrential downpours. Throughout Central America Mitch claimed in excess of 11,000 lives, with thousands of others missing. More than three million people were either homeless or severely affected. Most Hurricanes occasionally form over the Pacific and move north to affect southern Honduras, but Pacific storms are generally less severe and their landfall rarer.

Main article: Rivers of Honduras
File:Barra-de-los-rios-ulua y chamelecon.jpg
The Ulúa River as seen from the air. The Ulua is perhaps the most economically important river in Honduras.

Honduras is a water-rich country. The most important river in Honduras is the Ulúa, which flows 400 kilometers to the Caribbean through the economically important Valle de Sula. Numerous other rivers drain the interior highlands and empty north into the Caribbean. These other rivers are important, not as transportation routes, but because of the broad fertile valleys they have produced. The Choluteca River runs south from Tegucigalpa through Choluteca and out at the Gulf of Fonseca.

Despite an abundance of rivers, large bodies of water are rare. Lago de Yojoa, located in the west-central part of the country, is the sole natural lake in Honduras. This lake is twenty-two kilometers long and at its widest point measures fourteen kilometers. Several large, brackish lagoons open onto the Caribbean in northeast Honduras. These shallow bodies of water allow limited transportation to points along the coast.

Deforestation resulting from logging is especially rampant in Olancho Department. The clearing of land for agriculture is especially prevalent in the largely undeveloped La Mosquitia region, causing land degradation and soil erosion.

There is population movement of the rural poor out of the countryside and into the urban centers.