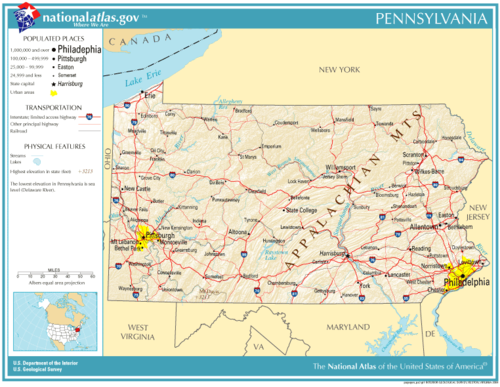 The Geography of Pennsylvania varies from sea level marine estuary to mountainous plateau, is significant for its natural resources and ports, and is notable for its role in the history of the United States. 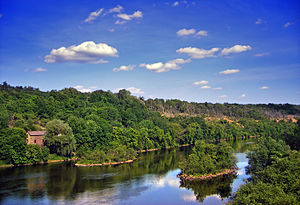 The Lehigh River in the Lehigh Valley

Pennsylvania's nickname, the Keystone State, derives from the fact that the state forms a geographic bridge both between the Northeastern states and the Southern states, and between the Atlantic seaboard and the Midwest. Also, the title of "Keystone" is for the importance of Pennsylvania to the entire U.S. It even has a toehold on the Great Lakes, with the Erie triangle. It is bordered on the north and northeast by New York; on the east by New Jersey; on the south by Delaware, Maryland, and West Virginia; on the west by Ohio; and on the northwest by Lake Erie. It has a short border on Lake Erie with Canada. The Delaware, Susquehanna, Monongahela, Allegheny, and Ohio rivers are the major rivers of the state. The Lehigh River, the Toughener River and Oil Creek are smaller rivers which have played an important role in the development of the state. It is one of the thirteen U.S. states that share a border with Canada.

The Pennsylvania Dutch region in south-central Pennsylvania is a favorite for sightseers. The Pennsylvania Dutch, including the Old Order Amish, the Old Order Mennonites and at least 15 other sects, are common in the rural areas around the cities of Lancaster, York, and Harrisburg, with smaller numbers extending northeast to the Lehigh Valley and up the Susquehanna River valley. (There are actually more Old Order Amish in Holmes County, Ohio, and there are plain sect communities in at least 47 states, but many Mennonites remain, particularly in Lancaster County.) Some adherents eschew modern conveniences and use horse-drawn farming equipment and carriages, while others are virtually indistinguishable from non-Amish or Mennonites. Descendants of the plain sect immigrants who do not practice the faith may refer to themselves as Pennsylvania Germans.

Despite the name, the people are not from the Netherlands, but rather are from various parts of southwest Germany, Alsace and Switzerland. The word "Dutch" here is left over from the actual German word for "Germany" (deutschland) which once referred to the entire West Germanic dialect continuum. It is also often thought to be a corruption of the German word for 'German,' which is "Deutsch." As one might imagine, a Pennsylvania Dutch settler would have been asked what nationality he was. His reply, in German, would have been "Deutsch," which was misunderstood as 'Dutch.'

The western third of the state can be considered a separate large geophysical unit, distinctive enough that it may best be described on its own. Several important, complex factors set Western Pennsylvania apart in many respects from the east, such as the initial difficulty of access across the mountains, rivers oriented to the Mississippi River drainage system, and above all, the complex economics involved in the rise and decline of the American steel industry centered on Pittsburgh. Other factors, such as a markedly different style of agriculture, the rise of the oil industry, timber exploitation and the old wood chemical industry, and even, in linguistics, the local dialect, all make this large area sometimes seem a virtual "state within a state". 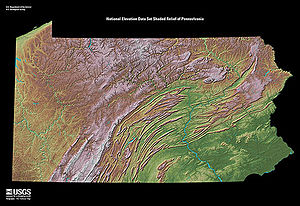 Pennsylvania is bisected diagonally by ridges of the Appalachian Mountains from southwest to northeast. To the northwest of the folded mountains is the Allegheny Plateau, which continues into southwestern and south central New York. This plateau is so dissected by valleys that it also seems mountainous. The plateau is underlain by sedimentary rocks of Mississippian and Pennsylvanian age, which bear abundant fossils as well as natural gas, coal and petroleum.

In 1859, near Titusville, Edwin L. Drake drilled the first oil well in the U.S. into these sediments.[1] Similar rock layers also contain coal to the south and east of the oil and gas deposits. In the metamorphic (folded) belt, anthracite (hard coal) is mined near Wilkes-Barre and Hazelton. These fossil fuels have been an important resource to Pennsylvania. Timber and dairy farming are also sources of livelihood for midstate and western Pennsylvania. Along the shore of Lake Erie in the far northwest are orchards and vineyards.

During the most recent Ice Age, the northeastern and northwestern corners of present-day Pennsylvania were buried under the southern fringes of the Laurentide ice sheet. Glaciers extended into the Appalachian valleys of central Pennsylvania, but the ice did not overtop the mountains. At its furthest extent it spread as far south as Moraine State Park, about 40 miles (64 km) north of Pittsburgh.

Pennsylvania has 57 miles (92 km) of shoreline along the Delaware River estuary.[2] The tidal marsh of this estuary has been protected as John Heinz National Wildlife Refuge at Tinicum. Pennsylvania is the only truly landlocked state of the original thirteen states, although Connecticut, located on the Long Island Sound, also has no actual coastline (The difference between coast and shore is explained in the respective articles).

Pennsylvania has one of the largest seaports in the U.S. on its narrow shore, the Port of Philadelphia. In the west the Port of Pittsburgh is also very large and even exceeds Philadelphia in rank by annual tonnage, because of the large volume of bulk coal shipped by barge down the Ohio River. Chester, downstream from Philadelphia, and Erie, the Great Lakes outlet on Lake Erie in the Erie Triangle, are smaller but still important ports.

Pennsylvania has been the site of some of the worst ecological disasters experienced in U.S. history:

Precipitation is abundant throughout the state, as the primary climatic influences are the Atlantic Ocean and the Gulf of Mexico, plus Arctic influences that cross over the Great Lakes.