From Infogalactic: the planetary knowledge core
Jump to: navigation, search
Not to be confused with geode.

The geoid is the shape that the surface of the oceans would take under the influence of Earth's gravitation and rotation alone, in the absence of other influences such as winds and tides. This surface is extended through the continents (such as with very narrow hypothetical canals). All points on the geoid have the same gravity potential energy (the sum of gravitational potential energy and centrifugal potential energy). The force of gravity acts everywhere perpendicular to the geoid, meaning that plumb lines point perpendicular and water levels parallel to the geoid.

Specifically, the geoid is the equipotential surface that would coincide with the mean ocean surface of the Earth if the oceans and atmosphere were in equilibrium, at rest relative to the rotating Earth,[1] and extended through the continents (such as with very narrow canals). According to Gauss, who first described it, it is the "mathematical figure of the Earth", a smooth but highly irregular surface whose shape results from the uneven distribution of mass within and on the surface of the Earth. It does not correspond to the actual surface of the Earth's crust, but to a surface which can only be known through extensive gravitational measurements and calculations. Despite being an important concept for almost two hundred years in the history of geodesy and geophysics, it has only been defined to high precision in recent decades[when?]. It is often described as the true physical figure of the Earth,[1] in contrast to the idealized geometrical figure of a reference ellipsoid. 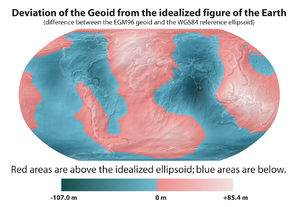 Map of the undulation of the geoid, in meters (based on the EGM96 gravity model and the WGS84 reference ellipsoid).[3]

The geoid surface is irregular, unlike the reference ellipsoid which is a mathematical idealized representation of the physical Earth, but considerably smoother than Earth's physical surface. Although the physical Earth has excursions of +8,848 m (Mount Everest) and −429 m (Dead Sea), the geoid's variation ranges from −106 to +85 m, less than 200 m total[4] compared to a perfect mathematical ellipsoid.

If the ocean surface were isopycnic (of constant density) and undisturbed by tides, currents, or weather, it would closely approximate the geoid. The permanent deviation between the geoid and mean sea level is called ocean surface topography. If the continental land masses were criss-crossed by a series of tunnels or canals, the sea level in these canals would also very nearly coincide with the geoid. In reality the geoid does not have a physical meaning under the continents, but geodesists are able to derive the heights of continental points above this imaginary, yet physically defined, surface by a technique called spirit leveling.

Being an equipotential surface, the geoid is by definition a surface to which the force of gravity is everywhere perpendicular. This means that when travelling by ship, one does not notice the undulations of the geoid; the local vertical (plumb line) is always perpendicular to the geoid and the local horizon tangential to it. Likewise, spirit levels will always be parallel to the geoid.

Note that a GPS receiver on a ship may, during the course of a long voyage, indicate height variations, even though the ship will always be at sea level (tides not considered). This is because GPS satellites, orbiting about the center of gravity of the Earth, can only measure heights relative to a geocentric reference ellipsoid. To obtain one's geoidal height, a raw GPS reading must be corrected. Conversely, height determined by spirit leveling from a tidal measurement station, as in traditional land surveying, will always be geoidal height. Modern GPS receivers have a grid implemented inside where they obtain the geoid (e.g. EGM-96) height over the World Geodetic System (WGS) ellipsoid from the current position. Then they are able to correct the height above WGS ellipsoid to the height above WGS84 geoid. In that case when the height is not zero on a ship it is due to various other factors such as ocean tides, atmospheric pressure (meteorological effects) and local sea surface topography.

The gravitational field of the earth is neither perfect nor uniform. A flattened ellipsoid is typically used as the idealized earth, but even if the earth were perfectly spherical, the strength of gravity would not be the same everywhere, because density (and therefore mass) varies throughout the planet. This is due to magma distributions, mountain ranges, deep sea trenches, and so on.

If that perfect sphere were then covered in water, the water would not be the same height everywhere. Instead, the water level would be higher or lower depending on the particular strength of gravity in that location.

Spherical harmonics are often used to approximate the shape of the geoid. The current best such set of spherical harmonic coefficients is EGM96 (Earth Gravity Model 1996),[5] determined in an international collaborative project led by NIMA. The mathematical description of the non-rotating part of the potential function in this model is:[6]

are the fully normalized associated Legendre polynomials of degree

are the numerical coefficients of the model based on measured data. Note that the above equation describes the Earth's gravitational potential

, not the geoid itself, at location

being the geocentric radius, i.e., distance from the Earth's centre. The geoid is a particular[6] equipotential surface, and is somewhat involved to compute. The gradient of this potential also provides a model of the gravitational acceleration. EGM96 contains a full set of coefficients to degree and order 360 (i.e.

), describing details in the global geoid as small as 55 km (or 110 km, depending on your definition of resolution). The number of coefficients,

, can be determined by first observing in the equation for V that for a specific value of n there are two coefficients for every value of m except for m = 0. There is only one coefficient when m=0 since

. There are thus (2n+1) coefficients for every value of n. Using these facts and the formula,

, it follows that the total number of coefficients is given by

using the EGM96 value of

For many applications the complete series is unnecessarily complex and is truncated after a few (perhaps several dozen) terms.

New even higher resolution models are currently under development. For example, many of the authors of EGM96 are working on an updated model[7] that should incorporate much of the new satellite gravity data (see, e.g., GRACE), and should support up to degree and order 2160 (1/6 of a degree, requiring over 4 million coefficients).

NGA has announced the availability of EGM2008, complete to spherical harmonic degree and order 2159, and contains additional coefficients extending to degree 2190 and order 2159.[8] Software and data is on the Earth Gravitational Model 2008 (EGM2008) - WGS 84 Version] page.[8]

The 1990s saw important discoveries in the theory of geoid computation. The Precise Geoid Solution by Vaníček and co-workers improved on the Stokesian approach to geoid computation.[9] Their solution enables millimetre-to-centimetre accuracy in geoid computation, an order-of-magnitude improvement from previous classical solutions.[10][11][12]

Gravity and Geoid anomalies caused by various crustal and lithospheric thickness changes relative to a reference configuration. All settings are under local isostatic compensation.

Variations in the height of the geoidal surface are related to density anomalous distributions within the Earth. Geoid measures help thus to understand the internal structure of the planet. Synthetic calculations show that the geoidal signature of a thickened crust (for example, in orogenic belts produced by continental collision) is positive, opposite to what should be expected if the thickening affects the entire lithosphere.

Recent satellite missions, such as GOCE and GRACE, have enabled the study of time-variable geoid signals. The first products based on GOCE satellite data became available online in June 2010, through the European Space Agency (ESA)’s Earth observation user services tools.[13][14] ESA launched the satellite in March 2009 on a mission to map Earth's gravity with unprecedented accuracy and spatial resolution. On 31 March 2011, the new geoid model was unveiled at the Fourth International GOCE User Workshop hosted at the Technische Universität München in Munich, Germany.[15] Studies using the time-variable geoid computed from GRACE data have provided information on global hydrologic cycles,[16] mass balances of ice sheets,[17] and postglacial rebound.[18] From postglacial rebound measurements, time-variable GRACE data can be used to deduce the viscosity of Earth's mantle.[19]

The concept of the geoid has been extended to other planets and also moons,[20] as well as asteroids.[citation needed]