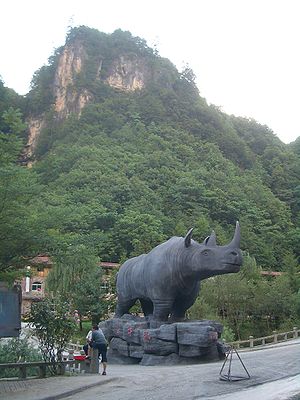 The town of Hongping, in Shennongjia Forestry District, is proud of its rhinoceros fossil heritage

The Geology of China (中国地质, Zhōngguó dì zhì) (or the geological structure of the People's Republic of China) can be divided into several parts. The historical centre of Chinese culture is on the loess plateau, the world's largest Quaternary loess deposit, and on the alluvial lands at the east of it. The alluvial East China plain extends from just south of Beijing in the north, to the Yangzi river delta in the south, punctuated only by the igneous Shandong highlands and peninsula. South of the Yangzi river, most of the landscape is mountainous, dominated by sedimentary deposits and by the Yangzi craton. The most famous scenery in China is found in the karst landscapes of Guangxi and Yunnan provinces. The alluvial Sichuan basin is surrounded by mountains, the Qinling mountains to the north and the Himalaya to the west and southwest. Much of Northeast China, or Manchuria, is dominated by alluvial plains, but the border regions with Korea are also highly mountainous. In the west, most of the Tibetan plateau is in China, and averages over 4000 metres in elevation. The Yunnan-Guizhou plateau is also an extension of the Tibetan plateau.[1]

It was not until late in the Qing Dynasty (1644–1911) that the government formulated a policy to introduce foreign science and technology into China. Modern geologic ideas were introduced with the establishment of technical schools and the translation into Chinese of works by James D. Dana and Charles Lyell during the 1870s. Early in the twentieth century, foreign geology teachers were brought to China and Chinese students were sent to foreign countries to study geology. This infusion successfully developed the modern teaching and practice of geology in China.[2]

China has 44 national geological parks managed since 1999 by the Chinese Ministry of Land and Resources in cooperation with UNESCO to find a way to protect geological sites of importance while encouraging both tourism and scientific research. Zhangjiajie Gritstone-peak Forest, China's best preserved cluster of volcanoes and geological features in Hunan Province, in 2001 became among the first nationally designated geological park. In February 2004, UNESCO announced the World Network of Geological Parks as well as its first geology park conference to be held in Beijing from June 27–29, 2004. Of the 28 original UNESCO World Geoparks, eight are in China. Currently there 26 World Geoparks in China,[4] including the following: