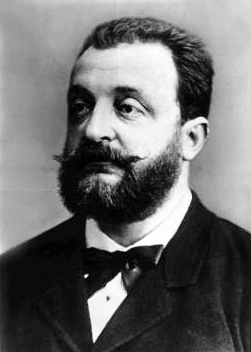 Georg Ritter von Schönerer (17 July 1842 – 14 August 1921) was an Austrian landowner and politician of the Austro-Hungarian Monarchy active in the late 19th and early 20th centuries. A major exponent of pan-Germanism and German nationalism in Austria as well as a radical opponent of political Catholicism and a fierce antisemite, his agitation exerted much influence on the young Adolf Hitler. Schönerer was known for a generation to be the most radical pan-German nationalist in Austria.[1]

Schönerer was born in Vienna as Georg Heinrich Schönerer; his father, the wealthy railroad pioneer Matthias Schönerer (1807–1881) in the employ of the Rothschilds, was knighted (adding the heritable title of Ritter (Knight) and nobility particle of von) by Emperor Franz Joseph in 1860. His wife was a great-granddaughter of R. Samuel Löb Kohen, who died at Pohrlitz in 1832.[2] He had a younger sister, Alexandrine, later director of the Theater an der Wien, who strongly repudiated her brother's attitudes.

From 1861, Georg studied agronomy at the universities of Tübingen, Hohenheim and Magyaróvár (Ungarisch-Altenburg, today a campus of the University of West Hungary). He went on conducting the business affairs of his father's estate at Rosenau near Zwettl in the rural Waldviertel region of Lower Austria, where he became known as a generous patriarch of the local peasants and great benefactor.[citation needed]

Shaken by the Austrian defeat in the 1866 Austro-Prussian War, the dissolution of the German Confederation and the foundation of the German Empire in 1871, young Schönerer became a political activist and ardent admirer of the German chancellor Otto von Bismarck. Indeed, Schönerer wrote passionately admiring letters to Bismarck, and continued doing so even after Bismarck made it clear that he rejected any sort of Austrian-German nationalism and would not allow the pan-Germans in Austria to jeopardize the Dual Alliance.[3]

During the turmoil of the Panic of 1873, Schönerer was elected to Cisleithanian Austria’s Imperial Council parliament as a liberal representative, but became more and more a German nationalist as his career progressed. Soon he became widely known for his oratory and was considered a firebrand in parliament. He broke with his party three years later, agitating against "Jewish" capitalism, against the ruling Catholic Habsburg dynasty, and against the Austro-Hungarian occupation of Bosnia and Herzegovina in 1878. This occupation he condemned as a betrayal of German interests. During a speech he said, "More and more, and ever more loudly, one can hear the German crown provinces exclaim: If only we already belonged to the German Reich and were finally rid of Bosnia and its entourage!"[4]

Schönerer's attitudes and political talent were attractive for national liberal sections of the German-speaking population contemplating the lost chance of a Greater German nation-state, ultimately squandered in the failed Revolutions of 1848. 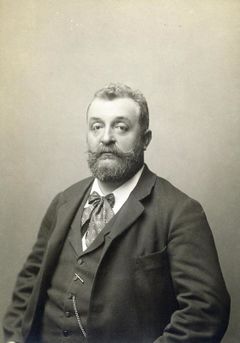 Tensions rose in 1879 after the accession of Austrian minister-president Eduard Taaffe, whose monarchist politics Schönerer and his followers considered "anti-German." By 1882 he, together with politicians like Viktor Adler and Heinrich Friedjung, had worked out the Linz Program ("not liberal, not clerical, but national") of the German national movement, which would become a considerable force in Austrian politics. The program aimed at the autonomy of the predominantly German-speaking Cisleithanian crown lands, including the split-off of "alien" Galicia, Bukovina and Dalmatia, and their affiliation with the German Empire ruled by the House of Hohenzollern. These plans even fit with the ideas of Polish, Hungarian and Croatian nationalists, but if they had been put into practice they would have entailed the disempowerment of the House of Habsburg and the Germanisation of the Czech lands in Bohemia.

During the 1880s, Schönerer came to consider his struggle for the German Austrians as a fight against the Jews.[5] By the peak of his career he had transformed into a far-right politician, considered by left-leaning liberals to be even a conservative. Schönerer developed a political philosophy that featured elements of a violent racial opposition to Jews which disregarded religious affiliations. His campaigning became especially vocal upon the arrival of Jewish refugees during the Russian Empire's pogroms, starting in 1881. He fiercely denounced the influence of "exploitative international Jews" and in 1885 had an Aryan paragraph added to the Linz program, which led to the ultimate breach between him and Adler and Friedjung. 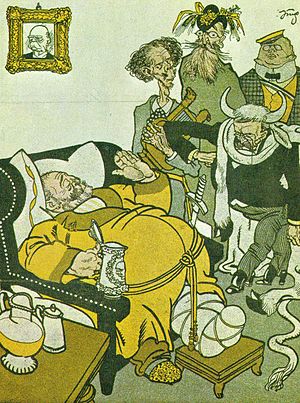 Schönerer was imprisoned for his raid on a newspaper office. While doing so, he allegedly was drunk, hence this caricature

Schönerer's approach became the model for German national Burschenschaften (student fraternities) and numerous associations in Cisleithanian Austria. In turn, Jewish activists like Theodor Herzl began to adopt the idea of Zionism. Schönerer's authoritarianism, popular solidarism, nationalism, pan-Germanism, anti-Slavism, and anti-Catholicism appealed to many Viennese, mostly working-class. This appeal made him a powerful political figure in Austria, and he considered himself leader of the German Austrians. Defying the Austrian education ministry's prohibition of pan-German symbols in schools and colleges, Schönerer urged German Austrians to wear blue cornflowers (known to be the favourite flower of German Emperor William I) in their buttonholes, along with cockades in the German national colours (black, red, and yellow), as a way to show pride in their German identity and dismissal of the multi-ethnic Austro-Hungarian Empire[6][7] Like many other Austrian pan-Germans, Schönerer hoped for the dissolution of the Austro-Hungarian Empire and an Anschluss with Germany.[3]

Schönerer's movement had various strict criteria: it only allowed its members to be Germans; none of the members could have relatives or friends who were Jews or Slavs, and before any member could be married, he or she had to prove "Aryan" descent and have his or her health checked for any potential defects.[8] Other pan-German movements generally followed suit by expelling Jews and generally Slavs as well.[9]

Schönerer was addressed by his supporters as the "Führer," and he and his followers also used the "Heil" greeting, two things Hitler and the Nazis later adopted.[10] Schönerer and his followers would often meet during the summer and winter and celebrate German history and listen to German battle songs. Schönerer told his followers to prepare for a battle between Germans and Jews; he said "If we don't expel the Jews, we Germans will be expelled!"[9]

In 1888, he was temporarily imprisoned for ransacking a Jewish-owned newspaper office and assaulting its employees for reporting the imminent death of the admired German emperor Wilhelm I prematurely. Schönerer’s attack increased his popularity and helped members of his party get elected to the Austrian Parliament. Nevertheless, the prison sentence also resulted not only in the loss of his status as a noble, but also of his mandate in parliament. Schönerer was not re-elected to the Imperial Council until 1897, while rivals like the Vienna mayor Karl Lueger and his Christian Social Party took the chance created by his disfavor to get ahead.

Schönerer left the Catholic Church in January 1900, and converted to the Lutheran denomination.[11]

End of career in politics

Later in 1897, Schönerer still was able to help orchestrate the expulsion of Minister-President of Cisleithania Kasimir Felix Graf Badeni from office. Badeni had proclaimed that civil servants in Austrian-controlled Bohemia would have to know the Czech language, an ordinance which prevented many Bohemian ethnic German-speakers, the majority of whom could not speak Czech, from applying for government jobs. Schönerer staged mass protests against the ordinance and disrupted parliamentary proceedings, actions which eventually caused Emperor Franz Joseph to dismiss Badeni.

During these years, while the Kulturkampf divided Imperial Germany, Schönerer founded the Los von Rom! ("Away from Rome!") movement, which advocated the conversion of all Roman Catholic German-speaking people of Austria to Lutheran Protestantism, or, in some cases, to the Old Catholic Churches. Schönerer became even more powerful in 1901, when 21 members of his party gained seats in the Parliament. His influence and career rapidly declined thereafter, however, due to his forceful views and personality. His party suffered as well, and had virtually disintegrated by 1907. But his views and philosophy, not to mention his great skill as an agitator, would go on to influence and inspire Hitler as well as the Nazi Party.[12]

Schönerer died at his Rosenau manor near Zwettl, Lower Austria on 14 August 1921. He had arranged to be buried near Bismarck's mausoleum on his estate at Friedrichsruh, Lauenburg in present-day Schleswig-Holstein, northern Germany.