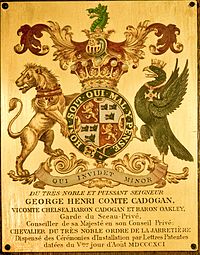 Cadogan was the eldest son of Henry Cadogan, 4th Earl Cadogan, by his wife Mary, daughter of Reverend Gerald Wellesley, younger brother of Arthur Wellesley, 1st Duke of Wellington. He was born in the city of Durham and baptised at St James's, Westminster, London. He was educated at Eton College and Christ Church, Oxford. [4]

As Viscount Chelsea, Cadogan served as a Major in the 5th (Militia) Battalion of the Royal Fusiliers (City of London Regiment) from 1865 to 1872; he was later Honorary Colonel of the battalion from 1886, and of the 2nd (South) Middlesex Rifle Volunteers from 1892 to 1902.[5]

In the 1868 General Election, he stood unsuccessfully as parliamentary candidate for Bury, Lancashire but was successfully returned as Member of Parliament for Bath in a by-election in May 1873, just before he was ennobled on the death of his father on 8 June and had to move to the House of Lords. He was made Under-Secretary for War in 1875 and Under-Secretary to the Colonies in 1878 by Disraeli.

He served under Lord Salisbury as Lord Privy Seal from 1886 to 1892 (after 1887 in the Cabinet), and again in the cabinet as Lord Lieutenant of Ireland from 1895 to 1902.[6] In the latter office, he supported the Land Act of 1896 which enabled Irish tenants to buy their homes from their landlords' estates and pressed the Treasury for more liberal terms than initially intended, appointed commissions to investigate intermediate education (1899) and university education (1901), and sponsored the Act of 1899 that created a department of agriculture, industries and technical education for Ireland.[7] He was first Mayor of Chelsea in 1900 and a Justice of the Peace for the counties of Middlesex, Cambridgeshire, Norfolk, Suffolk and London.[5]

By 1888, at the initiative of the Fifth Earl, building work was well under way at the south-eastern end of London's Sloane Street to rebuild Holy Trinity Church to the design of the leading Arts and Crafts architect John Dando Sedding. Cadogan funded the entire initial operation, including the commissioning of numerous fittings for the new building by leading sculptors and designers including Henry Wilson (who assumed overall artistic control when Sedding died prematurely), Onslow Ford, Edward Burne-Jones, William Morris, Nelson Dawson and Henry Hugh Armstead. Money was found for the installation of a great organ by James John Walker, which quickly became famous for its cathedral-like effect in the opulent acoustic of the building. The church (and its fittings, including the organ) remain a testament to a very particularly focussed example of aristocratic patronage.

As Lord of the Manor of Chelsea he held large estates there, much of which he dedicated to houses for the working class.

During his lifetime Lord Cadogan commissioned a mausoleum for family interments at Brookwood Cemetery but in 1910 he decided he no longer wanted to be interred in the mausoleum. This building, the largest mausoleum in the cemetery, was bought by the cemetery owners, the London Necropolis Company, fitted with shelves and niches to hold urns, and used as a dedicated columbarium from then on.[8]

On 16 May 1865, he married Lady Beatrix Craven, fourth daughter of William Craven, 2nd Earl of Craven. They had nine children:

He bought Culford Park, Culford, Suffolk, in 1889 as a family home. It is now a private school.