Argyll was born at Ardencaple Castle, Dunbartonshire, the second but only surviving son of John Campbell, 7th Duke of Argyll, and his second wife Joan Glassel, the only daughter of John Glassel.[1] Argyll succeeded his father as duke in 1847.[1] With his death he became also hereditary Master of the Household of Scotland and Sheriff of Argyllshire.[1] 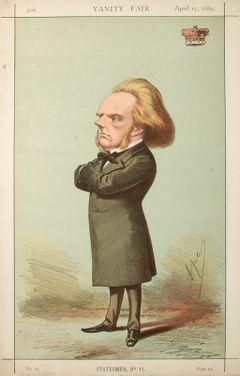 1869 caricature of the Duke of Argyll by Carlo Pellegrini

In William Ewart Gladstone's first government of 1868 to 1874, Argyll became Secretary of State for India, in which role his refusal to promise support against the Russians to the Emir of Afghanistan helped lead to the Second Afghan War. Argyll's wife, née Lady Elizabeth Georgiana Leveson-Gower, also served as Mistress of the Robes in this government. In 1871, while actually serving in the Cabinet, his son and heir, Lord Lorne, married one of Queen Victoria's daughters, Princess Louise, enhancing his status as a leading Grandee.

In 1880 he again served under Gladstone, as Lord Privy Seal, but resigned on 31 March 1881 in protest at Gladstone's Land Bill, claiming it would interfere with the rights of landlords and had been brought in response to terrorism.[2] In 1886, he fully broke with Gladstone over the question of the Prime Minister's support for Irish Home Rule, although he did not join the Liberal Unionist Party, but pursued an independent course. Having been already Vice Lord Lieutenant from 1847,[1] Argyll held the honorary post of Lord Lieutenant of Argyllshire from 1862 until his death in 1900. He was sworn of the Privy Council in 1853,[3] appointed a Knight of the Thistle in 1856[4] and a Knight of the Garter in 1883. In 1892 he was created Duke of Argyll in the Peerage of the United Kingdom.[5]

Argyll was also a scientist, or at least a publicist on scientific matters, especially evolution glaciology and economics. He was a leader in the scholarly opposition against Darwinism (1869, 1884b), against the erosive capability of glaciers (1873) and an important economist (1893) and institutionalist (1884a), in which latter capacity he was quite similar to his political opponent, Benjamin Disraeli.

Argyll was married three times. He married firstly Lady Elizabeth Leveson-Gower, eldest daughter of George Sutherland-Leveson-Gower, 2nd Duke of Sutherland, in 1844.[1] They had five sons and seven daughters, being:[9][10] 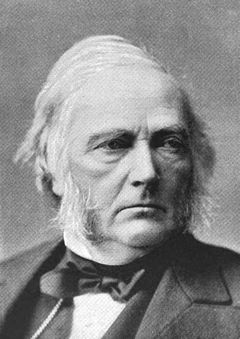 The Duke of Argyll, by Elliott & Fry

The Duchess of Argyll died aged 53 in May 1878. In 1881, Argyll married Amelia Maria (born 1843), daughter of the Right Reverend Thomas Claughton, Bishop of St Albans, and widow of Augustus Anson. She died aged 50 in January 1894. In 1895, Argyll married a third time, to Ina, daughter of Archibald McNeill. Ina survived the duke by a quarter of a century, dying in December 1925.[11] There were no children from either the second or third marriages.

Argyll died at Inveraray Castle in April 1900, six days before his 77th birthday, and is buried at Kilmun Parish Church. He was succeeded in his titles by his eldest son John.[11]