Cave was born in London, the son of Thomas Cave, Member of Parliament for Barnstaple, and his wife Elizabeth, daughter of Jasper Shallcrass. He was educated at the Merchant Taylors' School, London and St John's College, Oxford. After being called to the bar in 1880, he practised as a barrister for a number of years, being made King's Counsel and recorder of Guildford in 1904. 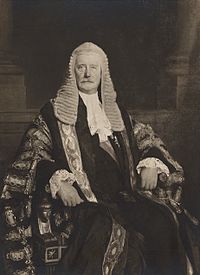 Portrait of the Viscount Cave.

In 1906 he was elected Conservative Member of Parliament for the Kingston Division of Surrey, was appointed Vice-Lieutenant of Surrey in 1907,[1] and a member of the Royal Commission on Land Purchase in 1908. Having served as standing Counsel to the University of Oxford for two years as well as Attorney General to the Prince of Wales, in 1915 Cave was appointed Solicitor General[2] and knighted.[3] The following year, he was made Home Secretary in Lloyd George's coalition government, a post he held for three years. As Home Secretary, he introduced the Representation of the People Act 1918 and he was very prominent in the debates in the House of Commons on the police strike of August 1918.[4]

In 1918, Sir George Cave was ennobled as Viscount Cave, of Richmond in the County of Surrey.[5] The following year, he became a Lord of Appeal[disambiguation needed], and chaired a number of commissions, including the Southern Rhodesian commission and the Munitions Enquiry Tribunal. In 1922, he became Lord Chancellor in Bonar Law's government, and again served in this capacity in Baldwin's first administration. He chaired the post war report that led to cuts to the minimum wages and regulation of collective bargaining, recommended by the Cave Committee in 1922.[6]

Having been appointed Knight Grand Cross of the Order of St Michael and St George (GCMG) in 1921, he was also elected Chancellor of the University of Oxford in 1925, defeating former Liberal Prime Minister Herbert Henry Asquith. Asquith was deeply upset by the defeat, partly because he felt that Cave, an old friend, should not have stood against him.[7]

He has been described, perhaps too harshly, as the least distinguished Lord Chancellor in the first three decades of the twentieth century.[8]

Lord Cave married Anne Estella Sarah Penfold Mathews, daughter of William Withey Mathews and sister of Sir Lloyd Mathews, in 1885. The marriage was childless. Cave died in March 1928, aged 72, at St Ann's, Burnham, Somerset, and was buried at Berrow in the same county. On the day of his death his resignation as Lord Chancellor had been accepted and it had been announced that he would be created an earl, and so his widow was created Countess Cave of Richmond. Having had no children, the viscountcy became extinct on Lord Cave's death, as did the earldom when his widow died in 1938.