George Clinton (July 26 [O.S. July 15] 1739 – April 20, 1812) was an American soldier and statesman, considered one of the Founding Fathers of the United States. He was Governor of New York from 1777 to 1795, and again from 1801 to 1804, then served as the fourth Vice President of the United States from 1805 to 1812, under Presidents Thomas Jefferson and James Madison. He and John C. Calhoun are the only people to have served as US vice president under two different presidents.

Clinton was born in Little Britain, Province of New York to Charles and Elizabeth Denniston Clinton, Presbyterian immigrants who left Longford County, Ireland, in 1729 to escape an Anglican regime that imposed severe disabilities on religious dissenters. His political interests were inspired by his father, who was a farmer, surveyor, and land speculator, and served as a member of the New York colonial assembly.[1] George Clinton was the brother of General James Clinton and the uncle of New York's future governor, DeWitt Clinton. George was tutored by a local Scottish clergyman.

During the French and Indian War he first served on a privateer, before enlisting in the provincial militia, where his father held the rank of Colonel. During the French and Indian War George rose to the rank of Lieutenant, accompanying his father in 1758 on Bradstreet's 1758 seizure of Fort Frontenac, cutting one of the major communication and supply lines between the eastern centres of Montreal and Quebec City and France's western territories. He and his brother James were instrumental in capturing a French vessel.[2]

His father's survey of the New York frontier so impressed the governor that he was offered a position as sheriff of New York City and the surrounding county in 1748. After the elder Clinton declined the honor, the governor later designated George as successor to the Clerk of the Ulster County Court of Common Pleas, a position he would assume in 1759 and hold for the next 52 years.[3] 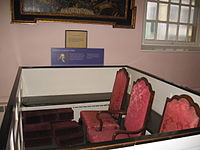 After the war, he read law in New York City under the attorney William Smith. He returned home (which at that time was part of Ulster County) and began his legal practice in 1764, He became district attorney the following year.[1] He was a member of the New York Provincial Assembly for Ulster County from 1768 to 1776, aligned with the anti-British Livingston faction.[4] His brother James was a member of the Provincial Convention that assembled in New York City on April 20, 1775.

A month after the first open armed conflict in Lexington, the Continental Congress resolved on May 25, 1775, to build fortifications in the Hudson highlands for the purpose of protecting and maintaining control of the Hudson River. James Clinton and Christopher Tappan, lifetime residents of the area, were sent to scout appropriate locations.

In December 1775 the New York Provincial Congress commissioned him brigadier general in the militia tasked with defending the Highlands of the Hudson River from British attack. To this end he built two forts and stretched a giant chain across the river to keep the British forces in New York City from sailing northward. On March 25, 1777, he was commissioned a brigadier general in the Continental Army. In June 1777, he was elected at the same time Governor and Lieutenant Governor of New York. He formally resigned the Lieutenant Governor's office and took the oath of office as Governor on July 30.[5] He was re-elected five times, remaining in office until June 1795. Although he had been elected governor, he retained his commission in the Continental Army and commanded forces at Fort Clinton and Fort Montgomery on October 6, 1777. He remained in the Continental Army until it was disbanded on November 3, 1783. 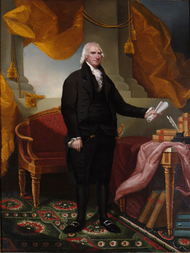 He was known for his hatred of Tories[6] and used the seizure and sale of Tory estates to help keep taxes down. A supporter and friend of George Washington, he supplied food to the troops at Valley Forge, rode with Washington to the first inauguration and gave an impressive dinner to celebrate it.

In 1783, Clinton became an original member of the New York Society of the Cincinnati and served as its president from 1794 to 1795.

In 1783, at Dobbs Ferry, Clinton and Washington negotiated with General Sir Guy Carleton for the evacuation of the British troops from their remaining posts in the United States. In 1787–88, Clinton publicly opposed adoption of the new United States Constitution. Twentieth-century historian Herbert Storing identifies Clinton as "Cato", the pseudonymous author of the Anti-Federalist essays which appeared in New York newspapers during the ratification debates. However, the authorship of the essays is disputed. Clinton withdrew his objections after the Bill of Rights was added.

In 1792, he was chosen by the nascent Jeffersonian Republican party as their candidate for vice president. While the Republicans joined in the general acclamation of Washington for a second term as president, they objected to the allegedly "monarchical" attitude of Vice President John Adams. Clinton was nominated rather than Thomas Jefferson because the Virginia electors could not vote for Washington, and for a second Virginian. Clinton received 50 electoral votes to 77 for Adams. His candidacy was damaged by his anti-Federalist record and by his narrow and disputed re-election as governor in 1792. (He won by only 108 votes, and the substantial anti-Clinton vote of Otsego County was excluded on a technicality.)

He did not run for re-election as governor in 1795. He held no political office until he was elected to the New York State Assembly in April 1800, and was a member of the 24th New York State Legislature. In 1801, he was again elected governor, serving until 1804. With 21 years of service, he was the longest-serving governor of a U.S. state until December 14, 2015, when Iowa governor Terry Branstad surpassed him.[7]

He was selected as President Jefferson's running mate in the 1804 Presidential election, replacing Aaron Burr. He served as the fourth Vice President of the United States, first under Jefferson, from 1805 to 1809, and then under President James Madison from 1809 until his death from a heart attack in 1812. Clinton attempted to challenge Madison for the presidency in 1808, but was outmaneuvered by Madison's supporters when the congressional nominating caucus chose him as the vice presidential nominee. Clinton received six electoral votes for president, but won election as vice president instead. Clinton's nephew, DeWitt Clinton, challenged Madison in 1812 after George Clinton's death.[8]

On February 7, 1770, Clinton married Sarah Cornelia Tappen (died 1800); they had five daughters and one son:

His original burial was in Washington, D.C. He was re-interred at the Old Dutch Churchyard in Kingston, New York in 1908.[9] He is of no known relation to the 42nd President, Bill Clinton, who was born William Jefferson Blythe III but took the surname of his stepfather. 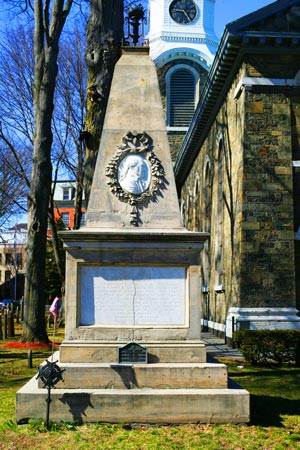 The grave monument of George Clinton in Kingston, New York

Historian Alan Taylor described George Clinton as that "The astutest politician in Revolutionary New York," a man who "understood the power of symbolism and the new popularity of a plain style especially when practiced by a man with the means and accomplishments to set himself above the common people."[1] His marriage to Cornelia Tappen strengthened his political position in heavily Dutch Ulster County.[4]

In 1873, the state of New York donated a bronze statue of Clinton to the U.S. Capitol's National Statuary Hall Collection.[10] In 1787 Clinton was depicted on an unauthorized copper coin minted privately in New York with "EXCELSIOR" on reverse.[11]

He was depicted in John Trumbull's Declaration of Independence even though he neither signed it nor was present when it was signed. In 1976 the painting appeared on the reverse of the two dollar bill and printed again in series 1995 and 2003.

In 2000, the State of New York ceremonially renamed the Kingston-Rhinecliff Bridge in honor of Clinton.[12]