George Cruikshank (27 September 1792 – 1 February 1878) was a British caricaturist and book illustrator, praised as the "modern Hogarth" during his life. His book illustrations for his friend Charles Dickens, and many other authors, reached an international audience.

Cruikshank was born in London. His father, Isaac Cruikshank, was one of the leading caricaturists of the late 1790s and Cruikshank started his career as his father's apprentice and assistant.

His older brother, Isaac Robert, also followed in the family business as a caricaturist and illustrator. Cruikshank's early work was caricature; but in 1823, at the age of 31, he started to focus on book illustration. He illustrated the first, 1823 English translation (by Edgar Taylor and David Jardine) of Grimms' Fairy Tales, published in two volumes as German Popular Stories.[1]

Upon his death, it was discovered that Cruikshank had fathered 11 illegitimate children with a mistress named Adelaide Attree, his former servant, who lived close to where he lived with his wife. Adelaide was ostensibly married and had taken the married surname 'Archibold'.[2]

Cruikshank's early career was renowned for his social caricatures of English life for popular publications.

He achieved early success collaborating with William Hone in his political satire The Political House That Jack Built (1819). 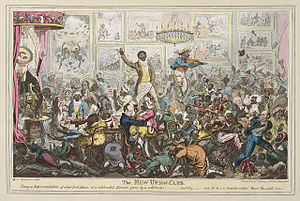 In the same year he produced the remarkable anti-abolitionist New Union Club. It satirised a dinner party organised by abolitionists with black guests.[3] 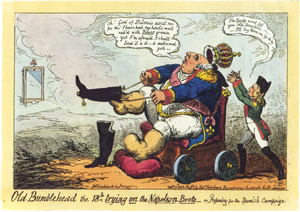 He gained notoriety with his political prints that attacked the royal family and leading politicians. In 1820 he received a royal bribe of £100 for a pledge "not to caricature His Majesty" (George IV of the United Kingdom) "in any immoral situation". His work included a personification of England named John Bull who was developed from about 1790 in conjunction with other British satirical artists such as James Gillray, and Thomas Rowlandson.[4]

Cruikshank replaced one of his major influences, James Gillray, as England's most popular satirist. For a generation he delineated Tories, Whigs and Radicals impartially. Satirical material came to him from every public event – wars abroad, the enemies of Britain (he was highly patriotic), the frolic, among other qualities, such as the weird and terrible, in which he excelled. His hostility to enemies of Britain and a crude racism is evident in his illustrations commissioned to accompany William Maxwell's History of the Irish rebellion in 1798 (1845) where his lurid depictions of incidents in the rebellion were characterised by the simian-like portrayal of Irish rebels. Among the other racially engaged works of Cruikshank there were caricatures about the "legal barbarities" of the Chinese, the subject given by his friend, Dr. W. Gourley, a participant in the ideological battle around the Arrow War, 1856–60. 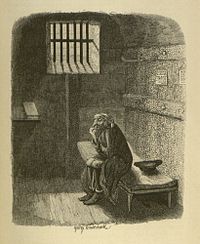 Fagin in his cell.
Copperplate engraving, 1838

On 30 December 1871 Cruikshank published a letter in The Times which claimed credit for much of the plot of Oliver Twist. The letter launched a fierce controversy around who created the work. Cruikshank was not the first Dickens illustrator to make such a claim. Robert Seymour who illustrated the Pickwick Papers suggested that the idea for that novel was originally his; however, in his preface to the 1867 edition, Dickens strenuously denied any specific input.

The friendship between Cruikshank and Dickens soured further when Cruikshank became a fanatical teetotaler in opposition to Dickens's views of moderation.

In Somerset Maugham's short story "Miss King", Cruickshank's influence is referenced: "She wore a large white cotton nightcap (on entering Ashenden has noticed the brown wig on a stand on the dressing-table) tied under the chin and a white voluminous nightdress that came high up in the neck. Nightcap and nightdress belonged to a past age and reminded you of Cruickshank's illustrations to the novels of Charles Dickens."

Temperance and the Volunteers

In the late 1840s, Cruikshank's focus shifted from book illustration to an obsession with temperance and anti-smoking. Formerly a heavy drinker, he now supported, lectured to, and supplied illustrations for the National Temperance Society and the Total Abstinence Society, among others. The best known of these are The Bottle, 8 plates (1847), with its sequel, The Drunkard's Children, 8 plates (1848), with the ambitious work, The Worship of Bacchus, published by subscription after the artist's oil painting, now in the Tate Gallery, London. For his efforts he was made vice president of the National Temperance League in 1856.

When the invasion scare of 1859 led to the creation of the Volunteer Movement, Cruikshank was one of those who organised Rifle Volunteer Corps (RVCs). At first his unit was the 24th Surrey RVC, which recruited from working men who were total abstainers and was named 'Havelock's Own' in honour of Major-General Sir Henry Havelock, a hero of the Indian Mutiny and pioneer of Temperance Clubs in the army. However, Cruikshank received little encouragement from the Lord-Lieutenant of Surrey, and was rebuked for crossing into Kent to recruit. Disgusted, he disbanded his unit in 1862 and began anew in Middlesex, organising the 48th Middlesex RVC (Havelock's Temperance Volunteers). The unit ran into financial difficulties and when Cruikshank was forced to retire due to age, he was replaced as commanding officer by Lt-Col Cuthbert Vickers, a wealthy shipowner. The 48th Middlesex merged with the 2nd City of London RVC, also a working-men's unit, composed mainly of printers from the Fleet Street area, and the combined unit had a long history as the City of London Rifles.[5][6][7][8][9]

After he developed palsy in later life, Cruikshank's health and work began to decline in quality. He died on 1 February 1878 and was originally buried in Kensal Green Cemetery. In November 1878 his remains were exhumed and reburied in St. Paul's Cathedral.[10] Punch magazine, which presumably did not know of his large illegitimate family, said in its obituary: "There never was a purer, simpler, more straightforward or altogether more blameless man. His nature had something childlike in its transparency." [2]

In his lifetime he created nearly 10,000 prints, illustrations, and plates. There are collections of his works in the British Museum and the Victoria and Albert Museum. A Royal Society of Arts blue plaque commemorates Cruikshank at 293 Hampstead Road in Camden Town.[11]

Samples of his work

The Life and Opinions of Tristram Shandy, Gentleman