From Infogalactic: the planetary knowledge core
Jump to: navigation, search
For other people with the same name, see George Daniels (disambiguation).

George Daniels, CBE, DSc, FBHI, FSA, AHCI (19 August 1926 – 21 October 2011) was a British horologist who was considered to be the best in the world during his lifetime.[1] He was one of the few modern watchmakers who built complete watches by hand (including the case and dial). But it was his creation of the coaxial escapement for which he is most remembered. The movement, which removed the need to add a lubricant, has been used by Omega in their highest-grade watches since 1999.[1]

Daniels was born in Sunderland in 1926. His mother was unmarried so she fled London and travelled north. After Daniels was born he and his mother returned to London, where she married Daniels' father. He suffered an abusive childhood and spent most of his time on the streets.[2] In 1944, Daniels entered the British Army; he already had an interest in watches and did some repairs for army friends. On leaving the army in 1947 with a gratuity of £50, he bought some tools and got a job as a watch repairer. From studying horology at night classes, he became a Fellow of the British Horological Institute. After a decade of hard work, Daniels opened his first watch repair and cleaning shop in 1960 in London. Becoming interested in the works of the notable early 19th-century French watchmaker Abraham-Louis Breguet, he soon became the 1960s' leading expert on Breguet and was often involved in advising on his work.[3]

It was a friend named Sam Clutton who introduced Daniels to the upscale timepiece market and convinced him that he had a future in expensive hand-crafted watches.[lower-alpha 1] In 1968, Daniels constructed – for £2,000 – his first pocket watch for Clutton. When his friend showed the piece to fellow collectors, it created great interest. Five years later, Daniels bought the watch back for £8,000. In 2012, it sold at auction in the United States for $285,000.[6]

Throughout his career, Daniels made signature timepieces for personally selected clients, stating "I never made watches for people if I didn't care for them."[7] The watches, which cost tens of thousands of pounds, took more than 2,500 hours to make. His signature was to give them clear and clean dials with subsidiary dials interwoven with the main chapter ring. 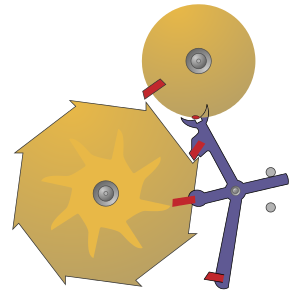 The coaxial escapement was created by George Daniels in 1974.

After much experimentation, Daniels had designed a new type of watch escapement by 1974. The mechanism, which was first unveiled in 1976 and patented in 1980, was called the coaxial escapement. Its design avoided the need to add oil to the escapement because the mechanism operated with very low friction. Traditional escapements had to use lubricants but this eventually caused problems with accuracy as oil thickened over time. But coaxial escapement used radial friction instead of sliding friction making lubricants unnecessary. Daniels' mechanism has since been described as the most important development in horology in the past 250 years.[8]

Although the horological industry was first introduced to the concept in 1976, Daniels' escapement was met by scepticism and lack of interest. It was not until the 1980s that Swatch Group chairman Nicolas Hayek adopted the concept using it in his upmarket Omega brand. The company unveiled – to great acclaim – its first mechanical watch using Daniels's coaxial escapement at the 1999 Basel Watch and Jewellery Fair.[9]

Daniels, who was a member of the Swiss Académie Horlogère des Créateurs Indépendants', continued to make watches well into later life. In total he created 37 hand-made watches completely by himself and a 50-piece wristwatch series in conjunction with independent watchmaker, Roger W. Smith, using a basic Omega movement.[10] By the time of his death he is said to have "completed 24 of the most extraordinary and technically advanced watches ever made".[11] His mechanical watches were more accurate than quartz with some losing less than a second per month.[6]

In 2006, to celebrate his work and his 80th birthday, Sotheby's and Bobinet (the antique watch dealer) held a retrospective exhibition of his work, featuring every watch Daniels had made, except one which is held by the British Museum. He was given an Award of Doctor of Science honoris causa by City University London in 2007.

He married, in 1964, Juliet Marryat, with whom he had a daughter. The marriage was later dissolved. He was the uncle of philosopher Stephen Neale. Daniels died on 21 October 2011.[8] 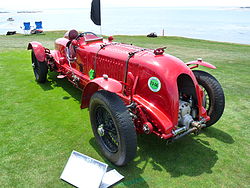 Daniels was a collector of classic cars. His collection included:[15]

Watchmaking, written by Daniels and first published in 1981, remains one of the most definitive books on Horology.[16] It was the first of another six books, some of which have been translated and published in French, Italian and German, that remain in print. Watchmaking, now in its Third Edition, was revised and reprinted in 1999.[16]

On 6 November 2012 part of Daniels' collection, including some pieces he made, was sold by Sotheby's in a 134-lot sale. The auction raised over £8 million for the George Daniels Educational Trust, which helps students seeking higher education in the fields of horology, engineering, medicine, building or construction.[11] The most expensive item was his 'Space Traveller's Watch' which sold for £1,329,250.[17]