George Etherege was born in Maidenhead, Berkshire, around 1636, to George Etherege and Mary Powney, as the eldest of six children.[4] Educated at Lord Williams's School where a school building was later named after him, he was also rumored to have been educated at Cambridge as well;[5] however, John Dennis assures that to his certain knowledge he understood neither Greek nor Latin, thus raising doubts that he could hardly have been there.[6] He served as apprentice to a lawyer and later studied law at Clement's Inn, London, one of the Inns of Chancery.[5] He probably travelled abroad to France with his father who stayed with the exiled queen Henrietta Maria. It is possible that he witnessed in Paris the performances of some of Molière's earliest comedies; and he is thought, from an allusion in one of his plays, to have been personally acquainted with Roger de Rabutin, Comte de Bussy.

Success on the stage

Soon after the Restoration in 1660 he composed his comedy of The Comical Revenge or Love in a Tub, which introduced him to Lord Buckhurst, afterwards the earl of Dorset. This was performed at the Duke's theatre in 1664, and a few copies were printed in the same year. It is partly in rhymed heroic verse, like the stilted tragedies of the Howards and Killigrew, but it contains comic scenes that are exceedingly bright and fresh. The sparring between Sir Frederick and the Widow introduced a style of wit hitherto unknown upon the English stage.

The success of this play was very great, but Etherege waited four years before he repeated his experiment. Meanwhile, he gained the highest reputation as a poetical beau, and moved in the circle of Sir Charles Sedley, Lord Rochester and the other noble wits of the day. His temperament is best known by the names his contemporaries gave him, of "gentle George" and "easy Etheredge." In 1668 he brought out She would if she could, a comedy full of action, wit and spirit, although by some thought to be frivolous and immoral. But in this play Etherege first shows himself a new power in literature. We move in an airy and fantastic world, where flirtation is the only serious business of life. At this time Etherege was living a life no less frivolous and unprincipled than those of his Courtals and Freemans.

The Man of Mode 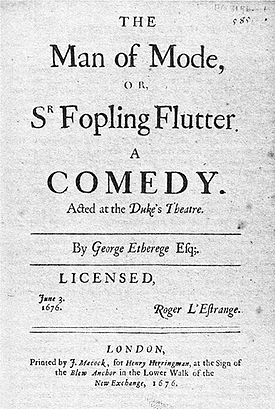 Between 1668 and 1671 Etherege went to Constantinople as secretary of the English ambassador Sir Daniel Harvey. After a silence of eight years, he came forward with one more play, which would be his last. The Man of Mode or, Sir Fopling Flutter, widely considered the best comedy of manners written in England before the days of Congreve, was acted and printed in 1676, and enjoyed an unbounded success. This may be attributed to the belief that it satirises, or at least references, well known contemporaries of London. Sir Fopling Flutter was a portrait of Beau Hewit, the reigning exquisite of the hour, Dorimant a reference to the Earl of Rochester, and Medley a portrait of Etherege himself (or, equally plausible, of his fellow playwright and wit Sir Charles Sedley); while even the drunken shoemaker was a real character, who made his fortune from being thus brought into public notice.

Life after the theatre

Etherege was part of the circle of John Wilmot; both men had a daughter by the unmarried actress Elizabeth Barry.[7] All three are characters in the 2005 film The Libertine based on a play by Stephen Jeffreys.

After his brilliant success Etheredge retired from literature, and a few years later had lost much of his fortune to gambling. He was knighted at some time before 1679, and married the wealthy widow Mary Sheppard Arnold. In March 1685 he was appointed resident minister in the imperial German court at Regensburg. After three and a half-year's residence and after the Glorious Revolution, he left for Paris to join James II in exile. His manuscript despatches are preserved in the British Museum, where they were discovered and described by Gosse in 1881; they are available in editions by Sybil Rosenfeld (1928) and Frederic Bracher (1974). He died in Paris, probably in 1691, for Narcissus Luttrell notes in February 1692 that Sir George Etherege, the late King James' ambassador to Vienna, had died recently in Paris.

Etherege holds a distinguished place in English literature as one of the "big five" of Restoration comedy, inventing the comedy of manners and leading the way for the masterpieces of Congreve and Sheridan.

Etherege's portraits of fops and beaux are considered to be the best of their kind, and he is now noted for his delicate touches of dress, furniture and scene, as well as vividly replicating in his work the fine airs of London gentlemen and ladies, perhaps better than Congreve. His biography was first written in detail by Edmund Gosse in Seventeenth Century Studies (1883).