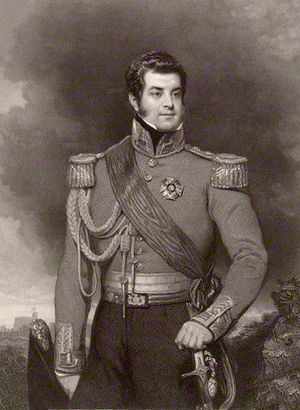 The eldest illegitimate son of William IV of the United Kingdom and his long-time mistress Dorothea Jordan, he was well-educated, although his written English was atrocious (as was that of several of his royal uncles). Like his siblings, he had little contact with his mother after his parents separated in 1811, preferring to rely on his expectations from his father.[1] He served as an army officer during the Peninsular War and subsequently in India. His father, though proud of his military record, was deeply concerned about his drinking and gambling, vices to which many of William's brothers were prone.

He was created 1st Earl of Munster, 1st Viscount FitzClarence and 1st Baron Tewkesbury on 4 June 1831,[2][3] and made a Privy Councillor in 1833. "Earl of Munster" had been a title held by his father before his accession to the British throne. George, like his siblings, was dissatisfied with the provisions made for him and this, combined with his increasing mental instability, caused a series of quarrels with his father which ended in a complete breach.[4] The estrangement caused the King great distress, but those close to him thought it better that there be as little contact as possible, since Munster's visits invariably upset his father. Even the death of Munster's sister Sophia de L'Isle, the King's favourite child, in April 1837, did not bring about a reconciliation.

FitzClarence committed suicide at the age of 48 in London. He shot himself with a pistol presented to him by King George IV when Prince of Wales. His suicide came as no surprise to his family who had long been concerned about his mental condition; his father's biographer attributes it to "a paranoiac sense of persecution."[7] At his inquest, his doctor and a surgeon told the coroner that they believed he was going mad, and in recent years there has been speculation that he suffered from the probably hereditary malady of porphyria which had afflicted his grandfather and several other members of the family.[8]