Not to be confused with George Fiddes Watt.

George Frederic Watts OM RA (London 23 February 1817 – 1 July 1904) was a popular English Victorian painter and sculptor associated with the Symbolist movement. He said "I paint ideas, not things."[1] Watts became famous in his lifetime for his allegorical works, such as Hope and Love and Life. These paintings were intended to form part of an epic symbolic cycle called the "House of Life", in which the emotions and aspirations of life would all be represented in a universal symbolic language.

Watts was born in Marylebone, London on the birthday of George Frederic Handel (after whom he was named), to the second wife of a poor piano-maker. Delicate in health and with his mother dying while he was still young, he was home-schooled by his father in a conservative interpretation of Christianity as well as via the classics such as the Iliad. The former put him off conventional religion for life, whilst the latter was a continual influence on his art. He showed artistic promise very early, learning sculpture from the age of 10 with William Behnes, starting to devotedly study the Elgin Marbles (later writing "It was from them alone that I learned") and then enrolling as a student at the Royal Academy at the age of 18. He first exhibited at the Academy in 1837.[1] He also began his portraiture career, receiving patronage from his close contemporary Alexander Constantine Ionides, who later came to be a close friend.

He came to the public eye with a drawing entitled Caractacus, which was entered for a competition to design murals for the new Houses of Parliament at Westminster in 1843. Watts won a first prize in the competition, which was intended to promote narrative paintings on patriotic subjects, appropriate to the nation's legislature. In the end Watts made little contribution to the Westminster decorations, but from it he conceived his vision of a building covered with murals representing the spiritual and social evolution of humanity.[2]

The prize from the Westminster competition did, however, fund a long visit to Italy from 1843 onwards, where Watts stayed and became friends with the British ambassador Henry Fox, 4th Baron Holland and his wife Augusta at their homes in Casa Feroni and the Villa Careggi. Also whilst in Italy Watts began producing landscapes and was inspired by Michelangelo's Sistine Chapel and Giotto's Scrovegni Chapel. In 1847, whilst still in Italy, Watts entered a new competition for the Houses of Parliament with his image Alfred Inciting the Saxons to Prevent the Landing of the Danes by Encountering them at Sea, on a patriotic subject but using Phidean inspiration. Leaving Florence in April 1847 for what was intended to be a brief return to London, he ended up staying. Back in Britain he was unable to obtain a building in which to carry out his plan of a grand fresco based on his Italian experiences, though he did produce a 45 ft by 40 ft fresco on the upper part of the east wall of the Great Hall of Lincoln's Inn entitled Justice, A Hemicycle of Lawgivers (completed 1859), inspired by Raphael's The School of Athens. In consequence most of his major works are conventional oil paintings, some of which were intended as studies for the House of Life. 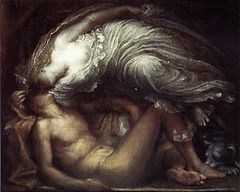 In his studio he met Henry Thoby Prinsep (for 16 years a member of the Council of India) and his wife Sara (née Pattle). Watts thus joined the Prinsep circle of bohemians, including Sara's seven sisters (including Virginia, with whom Watts fell in love but who married Charles, Viscount Eastnor in 1850), and Julia Margaret Cameron. Previously staying at 48 Cambridge Street, and then in Mayfair, in 1850 he helped the Prinseps into a 21-year lease on Little Holland House, and stayed there with them and their salon for the next 21 years. (The building was the dower house on the Hollands' London estate in Kensington, near the house of Lord Leighton.) One of only two pupils Watts ever accepted was Henry's son Valentine Cameron Prinsep; the other was John Roddam Spencer Stanhope — both remained friends, but neither became a major artist.[3] While living as tenant at Little Holland House, Watts's epic paintings were exhibited in Whitechapel by his friend the social reformer Canon Samuel Barnett, and he finally received a commission for the Houses of Parliament, completing his The Triumph of the Red Cross Knight (from The Faerie Queene) in 1852–53. He also took a short trip back to Italy in 1853 (including Venice, where Titian became yet more of an inspiration) and with Charles Thomas Newton to excavate Halicarnassus in 1856–57, via Constantinople and the Greek islands.

In the 1860s, Watts' work shows the influence of Rossetti, often emphasising sensuous pleasure and rich color. Among these paintings is a portrait of his young wife, the actress Ellen Terry, who was 30 years his junior — having been introduced by mutual friend Tom Taylor, they married on 20 February 1864, just seven days short of her 17th birthday. When she eloped with another man after less than a year of marriage, Watts was obliged to divorce her. Watts's association with Rossetti and the Aesthetic movement altered during the 1870s, as his work increasingly combined Classical traditions with a deliberately agitated and troubled surface, in order to suggest the dynamic energies of life and evolution, as well as the tentative and transitory qualities of life. These works formed part of a revised version of the House of Life, influenced by the ideas of Max Müller, the founder of comparative religion. Watts hoped to trace the evolving "mythologies of the races [of the world]" in a grand synthesis of spiritual ideas with modern science, especially Darwinian evolution. 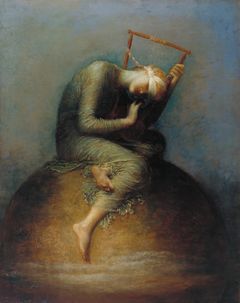 With the lease on Little Holland House nearing its end and the building soon to be demolished, in the early 1870s he commissioned a new London home nearby from C. R. Cockerell: New Little Holland House (backing onto the estate of Lord Leighton), and acquired a house at Freshwater, Isle of Wight — his friends Julia Margaret Cameron and Lord Tennyson already had homes on the island. To maintain his friendship with the Prinsep family as their children began leaving home, he built The Briary for them near Freshwater, and adopted their relative Blanche Clogstoun. In 1877, his decree nisi from Ellen Terry finally came through, and the Grosvenor Gallery was opened by his friend Coutts Lindsay. This was to prove his ideal venue for the next ten years.

In 1886, at the age of 69, Watts re-married, to Mary Fraser Tytler, a Scottish designer and potter, then aged 36. In 1891 he bought land near Compton, south of Guildford, in Surrey. The couple named the house "Limnerslease" (combining the words "limner" or artist with "leasen" or glean) and built the Watts Gallery nearby, a museum dedicated to his work — the first (and now the only) purpose-built gallery in Britain devoted to a single artist — which opened in April 1904, shortly before his death. Watts's wife Mary had designed the nearby earlier Watts Mortuary Chapel, which Watts paid for; he also painted a version of The All-Pervading for the altar only three months before he died.[4] 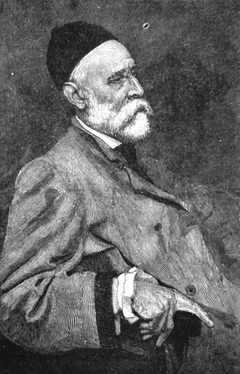 Many of his paintings are held at the Tate Gallery — he donated 18 of his symbolic paintings to Tate in 1897, and three more in 1900. Refusing the baronetcy twice offered him by Queen Victoria, he was elected as an Academician to the Royal Academy in 1867 and accepted the Order of Merit in 1902 — in his own words, on behalf of all English artists.

In his late paintings, Watts' creative aspirations mutate into mystical images such as The Sower of the Systems, in which Watts seems to anticipate abstract art. This painting depicts God as a barely visible shape in an energised pattern of stars and nebulae. Some of Watts' other late works also seem to anticipate the paintings of Picasso's Blue Period. He was also admired as a portrait painter. His portraits were of the most important men and women of the day, intended to form a "House of Fame". Many of these are now in the collection of the National Portrait Gallery: 17 were donated in 1895, with more than 30 more added subsequently. In his portraits Watts sought to create a tension between disciplined stability and the power of action. He was also notable for emphasising the signs of strain and wear on his sitter's faces. Sitters included Charles Dilke, Thomas Carlyle , James Martineau, and William Morris.

During his last years Watts also turned to sculpture. His most famous work, the 1902 large bronze statue Physical Energy, depicts a naked man on horseback shielding his eyes from the sun as he looks ahead of him. It was originally intended to be dedicated to Muhammad, Attila, Tamerlane and Genghis Khan, thought by Watts to epitomise the raw energetic will to power. A cast was placed at Rhodes Memorial in Cape Town, South Africa, honouring the grandiose imperial vision of Cecil Rhodes. Watts' essay "Our Race as Pioneers" indicates his support for imperialism, which he believed to be a progressive force. There is also a casting of this work in London's Kensington Gardens, overlooking the north-west side of the Serpentine.

Memorial to Heroic Self Sacrifice 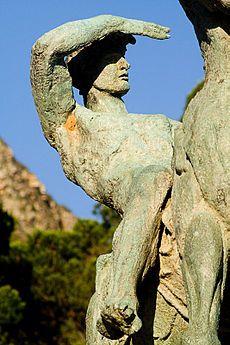 An admirer of royalty — he had painted Prince de Joinville and Edward, Prince of Wales — Watts proposed, in 1887, to commemorate the Golden Jubilee of Queen Victoria by creating a Memorial to Heroic Self Sacrifice to commemorate ordinary people who had died saving the lives of others, and who might otherwise have been forgotten. The scheme was not accepted at that time, but in 1898 Watts was approached by Henry Gamble, vicar of St Botolph's Aldersgate church. He suggested the memorial could be created in Postman's Park in the City of London.

The memorial was unveiled in an unfinished state in 1900, consisting of a 50-foot (15 m) wooden loggia designed by Ernest George, sheltering a wall with space for 120 ceramic memorial tiles to be designed and made by William De Morgan. At the time of opening, only four of the memorial tiles were in place. Watts died in 1904, and his widow Mary Watts took over the running of the project.

Several reverent biographies of Watts were written shortly after his death. With the emergence of Modernism, however, his reputation declined. Virginia Woolf's comic play Freshwater portrays him in a satirical manner, an approach also adopted by Wilfred Blunt, former curator of the Watts Gallery, in his irreverent 1975 biography England's Michelangelo. In his 1988 book on Ruskin, the art critic Peter Fuller emphasised Watts's spiritual and stylistic importance, also noting that late post-symbolist works such as The Sower of the Systems "stretched beyond the brink of abstraction".[5] On the centenary of his death Veronica Franklin Gould published G.F. Watts: The Last Great Victorian, a positive study of his life and work.

The composer Charles Villiers Stanford wrote his Sixth Symphony "In Memoriam G. F. Watts". It was composed in 1905 and first performed on 18 January 1906 in London under Stanford's direction. The four movements, although not having a detailed programme, are inspired by several works of art by Watts.

Literary references to Watts and his work include Elizabeth Taylor's 1953 novel Angel, where a picture by Watts is donated to a provincial museum by the protagonist, and mention of Watts' painting "Progress" in Bella Donna by Robert Hichens (1909, p. 34). Watts features (not altogether favourably) as a character in Lynne Truss's comic novel Tennyson's Gift (1996).