George Joachim Goschen, 1st Viscount Goschen (10 August 1831 – 7 February 1907) was a British statesman and businessman best remembered for being "forgotten" by Lord Randolph Churchill. He was initially a Liberal, then a Liberal Unionist before joining the Conservative Party by the time of the 1895 General Election.

While Chancellor of the Exchequer, in 1888 he introduced the Goschen formula to allocate funding for Scotland and Ireland.

He was born in London the son of William Henry Goschen, a merchant of German extraction. He was educated at Rugby under Tait, and at Oriel College, Oxford, where he took a first in classics. He entered his father's firm of Fruhling & Goschen, of Austin Friars, in 1853, and three years later became a director of the Bank of England.

In 1863 he was returned without opposition as one of the four MPs for the City of London in the Liberal interest, and he was reelected in 1865. In November of the same year he was appointed Vice-President of the Board of Trade and Paymaster-General, and in January 1866 he was made Chancellor of the Duchy of Lancaster, with a seat in the cabinet. When Gladstone became prime minister in December 1868, Goschen joined the cabinet as President of the Poor Law Board, until March 1871, when he succeeded Childers as First Lord of the Admiralty. In the 1874 general election he was the only Liberal returned for the City of London, and by a narrow majority. Being sent to Cairo in 1876 as delegate for the British holders of Egyptian bonds in 1876, he concluded an agreement with the Khedive in order to arrange for the conversion of the debt.

In 1878 his views on the county franchise question prevented him from voting consistently with his party. With the City of London becoming more Conservative, Goschen did not stand there at the 1880 general election, but was instead returned for Ripon in Yorkshire, which he represented until 1885, when he was returned for the Eastern Division of Edinburgh. He declined to join Gladstone's government in 1880 and also refused the post of Viceroy of India, but he did become special ambassador to the Porte, where he settled the Montenegrin and Greek frontier questions in 1880 and 1881. He was made an Ecclesiastical Commissioner in 1882. When Sir Henry Brand was raised to the peerage in 1884, Goschen was offered the role of Speaker of the House of Commons, but he declined. During the parliament of 1880–1885 he frequently found himself at odds with his party, especially over franchise extension and questions of foreign policy. When Gladstone adopted Home Rule for Ireland, Goschen followed Lord Hartington (afterwards 8th Duke of Devonshire) and became one of the most active of the Liberal Unionists. He failed to retain his seat for Edinburgh at the election in July of that year.

On the resignation of Lord Randolph Churchill in December 1886, Goschen, though a Liberal Unionist, accepted Lord Salisbury's invitation to join his ministry as Chancellor of the Exchequer. Churchill had assumed he could not be replaced, and famously commented that he had "forgotten Goschen" was a potential alternative. Goschen needed a seat in Parliament and so first stood in a by-election in the Liverpool Exchange constituency, but was defeated by seven votes in January 1887. He was then elected for the strongly Conservative St George's, Hanover Square, in February. His chancellorship was memorable for his successful conversion of the National Debt in 1888. He also introduced the first UK road tax, implemented in the form of two vehicle duties, on locomotives and carts. [1][2] [3]

Following the defeat of Salisbury's government in 1892, Goschen moved into opposition. Though he had been a leading Liberal Unionist as Chancellor of the Exchequer, Goschen did not stand against Joseph Chamberlain for the leadership of the party in 1892 following the departure of Hartington to the House of Lords as the Duke of Devonshire. Unable to work with Chamberlain, Goschen left the Liberal Unionists and joined the Conservatives in 1893. One obvious sign of his change of allegiance within the Unionist alliance was when he joined the exclusively Conservative Carlton Club in the same year. 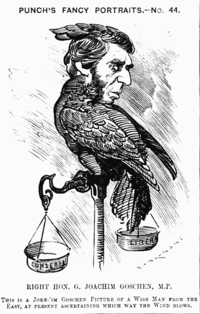 Caricature from Punch, 13 August 1881: "This is a Joke-'im picture of a Wise Man from the East, at present ascertaining which way the wind blows"

From 1895 to 1900 Goschen was First Lord of the Admiralty. He retired in 1900 and was raised to the peerage as Viscount Goschen of Hawkhurst, Kent. Though retired from active politics he continued to take a great interest in public affairs, and when Chamberlain started his tariff reform movement in 1903, Lord Goschen was one of the weightiest champions of free trade on the Unionist side.

In educational subjects Goschen had always taken the greatest interest, his best known, but by no means his only, contribution to popular culture being his participation in the University Extension Movement. His first efforts in parliament were devoted to advocating the abolition of religious tests and the admission of Dissenters to the universities. His published works indicate how ably he combined the wise study of economics with a practical instinct for business-like progress, without neglecting the more ideal aspects of human life. In addition to his well-known work on The Theory of the Foreign Exchanges, he published several financial and political pamphlets and addresses on educational and social subjects, among them being that on Cultivation of the Imagination, Liverpool, 1877, and that on Intellectual Interest, Aberdeen, 1888. He was President of the Royal Statistical Society, 1886-8.

He also wrote a biography of his grandfather, The Life and Times of George Joachim Goschen, publisher and printer of Leipzig (1903). This culminated a long-standing project to refute allegations of Jewish ancestry,[5] giving his earliest ascertainable ancestor as a Lutheran pastor named Joachimus Gosenius, recorded in 1609.[6] (It did not apparently prevent his family being classed as of Jewish origin in the German genealogical work known as The Semi Gotha, first published 1913.)[7]

I want to leave behind me all rancid emotion.
I want to be alone. I want to forget Goschen.[8]