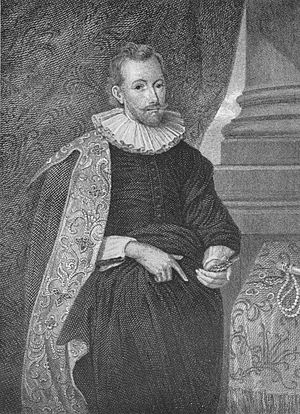 George Heriot (4 June 1563 – 12 February 1624) was a Scottish goldsmith and philanthropist. He is chiefly remembered today as founder of George Heriot's School, a large independent school in Edinburgh; his name has also been given to Heriot-Watt University, as well as several streets (and one pub) in the same city.

Heriot was the court goldsmith to Anne of Denmark, the wife of King James VI of Scotland, as well as to the king himself; he became very wealthy from this position, and wealthier still as a result of lending this money back to the king and the rest of his court. He moved to London along with the court in 1603, at the time of the Union of Crowns, and remained in London until he died in 1624. He had married twice, but had no recognised children surviving at the time of his death, and he left the bulk of his estate to found a hospital to care for "faitherless bairns" (orphaned children) in his home city.

Heriot was born in Gladsmuir, (East Lothian), on 4 June 1563, the eldest son of George Heriot and Elizabeth Balderstone, and one of ten children.[1] His father was a well-established goldsmith from an old Haddingtonshire family, who served as a Member of the Parliament of Scotland.[2]

On 14 January 1586 he was engaged to marry Christian Marjoribanks, the daughter of Simon Marjoribanks a burgess of the City of Edinburgh and a local merchant;[3] the couple would have two sons, who died in their youth.[4] To mark the marriage, and the end of his apprenticeship, Heriot was given 1500 merks[5] by his father to establish his own business, which he did in a small "luckenbooth" near St. Giles' Cathedral,[1] on the site of the entrance of the modern Signet Library.[2]

Goldsmith to the Crown 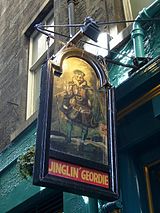 A pub in Edinburgh's Old Town preserves Heriot's nickname "Jinglin' Geordie" (from the sound of coins clinking in his purse).

From early in the 1590s, Heriot had been selling items to Anne of Denmark, the Queen Consort, and on 17 July 1597, he was officially appointed the goldsmith to the Queen. The role of a goldsmith in the early modern period extended beyond simply the making and trading of jewellery and precious metals; in effect, he had now become her banker. Over the following years, he would lend her significant amounts of money, often secured on jewellery he himself had sold her.[1] Anne's love of jewellery was "legendary", and by the late 1590s both she and the king were taking out significant loans to support their spending.[6] This ensured Heriot's position would remain lucrative; it had been estimated that between 1593 and 1603 he may have done as much as £50,000 of business with the Queen.[1]

Heriot's financial involvement with the court grew stronger over the years; he was appointed jeweller to King James VI in 1601, and was later involved in a governmental plan to replace the circulating currency of Scotland. By 1603, he held the right to farm the customs.[1]

In 1603, the Union of the Crowns saw James VI inherit the English throne. The king promptly moved his court to London, and Heriot – along with much of the court – followed suit. His loyalty was rewarded, and in November he was appointed a jeweller to the king, on a salary of £150. This sinecure was a small amount in comparison to his private business, which by 1609 saw him with loans to Queen Anne of £18,000, from which he drew a sizeable interest.[1]

His wife Christian having died, he returned to Edinburgh in 1609 to marry Alison Primrose, the daughter of James Primrose of Carington, the clerk to the Scottish Privy Council. The marriage was short-lived, as Alison died in 1612, and childless.[7]

Heriot had a town house in the Strand and a country estate at Roehampton, and considerable property in Edinburgh.[3] 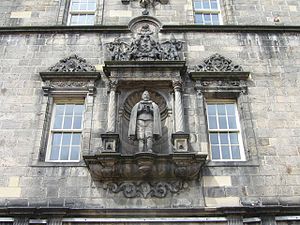 Statue of George Heriot in the quadrangle of the school he founded.

Heriot died in London in February 1624, and was buried at St. Martin-in-the-Fields, where the sermon was given by Walter Balcanquhall.[8]

Heriot is believed to have had at least four children by his first wife, including two sons who may have been drowned at sea, although the exact details of their death are unknown.[3] He had no other legitimate children – his second marriage was childless – but in his will left money to provide for two illegitimate daughters, aged ten and four. There were additional bequests to his stepmother and his half-siblings, as well as his nieces and nephews. However, the residue of the estate, some £23,625, was left to the city of Edinburgh, to establish a hospital for the free education of the "puir, faitherless bairns" of deceased Edinburgh burgesses.[1] 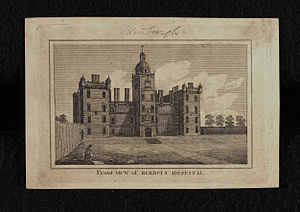 Heriot's Hospital was begun in 1628, and duly constructed outside the city walls of Edinburgh, immediately to the south of Edinburgh Castle, adjacent to Greyfriars Kirk. It was completed just in time to be occupied by Oliver Cromwell's forces during the English Civil War. The hospital opened in due course in 1659, with thirty pupils; its finances grew, and it took in other pupils in addition to the orphans for whom it was intended. In the 1880s, it began to charge fees; however, to this day it serves its charitable object, providing free education to a sizeable number of fatherless children.

A statue of Heriot stands within the quadrangle of the school, above the pend on the north entrance tower. This is by Robert Mylne the King's Master Mason. It bears a Latin inscription which translates as: "This statue shows my body, this building shows my soul".[9]

George Heriot is one of the carved figures on the Scott Monument on Princes Street. His figure, which stands on the lower tier of the south-west buttress, was carved by Peter Slater.[10] He is depicted holding a model of the school.

Note that the Oxford Dictionary of National Biography article is based on the original Dictionary of National Biography entry, but the two differ on several minor points. Where they conflict, the newer article is assumed to be accurate. The older article contains a number of details (e.g., a presumed deathdate for Heriot's first wife) omitted in the newer article; it is unclear if this is for reasons of space, or if those details were found inaccurate.