On October 10, 2012, Hincapie released a statement on his website acknowledging the use of performance-enhancing drugs and confirming that he had been approached by US Federal Investigators and USADA with regard to his experiences with doping.[3] Later that day a statement was released confirming his acceptance of a six-month ban from September 1, 2012, ending on March 1, 2013, along with a stripping of all race results between May 31, 2004, and July 31, 2006.[4]

Hincapie started a record 17 Tours. However, after his doping admission, he was retroactively disqualified from the 2004, 2005 and 2006 Tours. He completed his 16th and final Tour in 2012, which tied Joop Zoetemelk's record.[5]

Hincapie was born in Queens, New York, United States. His father Ricardo, a Colombian, introduced him to cycling, and his first race training was in New York City's Central Park. In 2004, Hincapie, along with his brother Richard launched their own line of sportswear, called Hincapie Sports.[6] He is married to former runway model and Tour de France podium girl Melanie Simonneau,[7] and they have two children, daughter Julia Paris (born on November 3, 2004) and son Enzo (born on June 20, 2008). Hincapie resides in Greenville, South Carolina. He graduated from Farmingdale High School on Long Island in 1991. 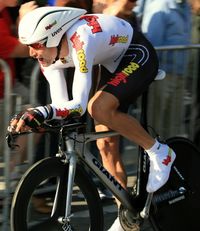 Hincapie in the Prologue of the 2008 Tour of California

Hincapie has several important wins of his own, starting with Gent–Wevelgem in 2001 and Kuurne–Brussels–Kuurne in 2005. Also in 2005, Hincapie took two stage wins at the Critérium du Dauphiné Libéré and 2nd place at Paris–Roubaix. In 2005 he had his first stage win in the Tour de France where, on July 17, he finished seven seconds ahead of Óscar Pereiro to win Stage 15 from Lézat-sur-Lèze to Pla d'Adet. In January 2014, Pereiro acknowledged in a radio show he sold that stage to Hincapie for an undisclosed amount. The deal was closed some kilometers before arriving to the finish line.[8] More recent victories include two stages at the Tour of California (2006), the overall and a stage at the Tour of Missouri (2007), and another stage win at the Critérium du Dauphiné Libéré in 2008. He is a three-time US Professional Road Race champion (1998, 2006, 2009).

Throughout his career Hincapie has targeted the cobbled classics of April, specifically the week that begins with the Tour of Flanders, continues mid-week with Gent–Wevelgem, and ends with Paris–Roubaix. He achieved his highest position on the podium with his 2001 victory in Gent–Wevelgem. Hincapie signing in at Tarbes during the 2006 Tour de France

In 2005, Hincapie showed a talent for short individual time trials (ITTs), winning the prologue at the 2005 Critérium du Dauphiné Libéré, placing second three times and third once in prologues in 2006 (including at the Tour de France), and placing second in the short ITT at Three Days of De Panne. In the 2006 Paris–Roubaix, bad luck struck Hincapie in the cobbled sector of Mons-en-Pévèle, when the steerer tube of his Trek bicycle snapped, leaving him dangling with no handlebars and crashing heavily. He was near the lead group but had to abandon the race.[9] He later won the ITT at the Eneco Tour of Benelux in 2006 and placed fourth in two longer ITTs that year. He finished third in the prologue at the 2007 Tour de France and second in the prologue at the Volta a Catalunya in 2008.

Hincapie rode for Team Columbia in the 2008 and 2009 seasons, departing Discovery Channel Pro Cycling Team shortly before it disbanded.[10] He is easily distinguished from the pack by his large size (1.91 m (6 ft 3 in)). His contract with the team expired after the 2009 season, and though there was talk of him joining Armstrong's new Team RadioShack, Hincapie signed with BMC Racing Team for the 2010 season.[11]

In 2012 he established the Hincapie Sportswear Development Team, initially with support from BMC.[12] He also set a record by completing his 17th Tour of Flanders, surpassing Briek Schotte.[13] On June 11, Hincapie announced that he would retire at the end of the season, after 19 years in the professional peloton.[14] On June 30, Hincapie started a record 17th Tour de France. He was allowed to lead the race onto the Champs-Élysées as this was his final Tour de France.[15] In August, Hincapie announced that he had raced in his last event, the USA Pro Cycling Challenge. In his own words: “It's been a long career for me, a good career and I'm proud of it. I'm sad to leave, but at the same time, I'm excited to spend more time with my family and start a new life.”[16] He also said that he didn't plan to terminate all his relations with cycling.[17] Following his retirement, Hincapie opened a bed and breakfast in Travelers Rest, South Carolina with his brother.[18]

On October 10, 2012, Hincapie announced on his website that he had used banned substances at times in his career. The statement reads in part:

"Because of my love for the sport, the contributions I feel I have made to it, and the amount the sport of cycling has given to me over the years, it is extremely difficult today to acknowledge that during a part of my career I used banned substances. Early in my professional career, it became clear to me that, given the widespread use of performance-enhancing drugs by cyclists at the top of the profession, it was not possible to compete at the highest level without them. I deeply regret that choice and sincerely apologize to my family, teammates and fans."

The statement came as the U.S. Anti-Doping agency announced plans to release documents related to doping accusations against Lance Armstrong, a former teammate of Hincapie.[19] 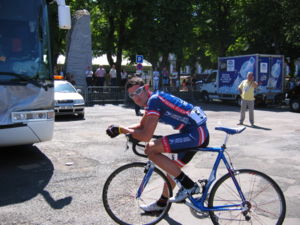 Hincapie at Saint-Flour during the 2004 Tour de France.