George was born at the royal villa at Tatoi, near Athens, the eldest son of Prince Constantine of Greece and his wife, Princess Sophia of Prussia. George pursued a military career, training with the Prussian Guard at the age of 18, then serving in the Balkan Wars as a member of the 1st Greek Infantry. When his grandfather was assassinated in 1913, his father became King Constantine I and George became the crown prince.[citation needed]

After a coup deposed King Constantine during the First World War, Crown Prince George, by then a Major, followed his father into exile in 1917 (see National Schism). George's younger brother, Alexander, was installed as king by prime minister Eleftherios Venizelos, an avowed Republican.[citation needed]

When Alexander I died following an infection from a monkey bite in 1920, Venizelos was voted out of office, and a plebiscite restored Constantine to the throne. Crown Prince George served as a colonel, and later a major general in the war against Turkey. During this time he married his second cousin, on 27 February 1921 in Bucharest, Princess Elisabeth of Romania, daughter of King Ferdinand and Queen Marie of Romania. When the Turks defeated Greece at the Battle of Dumlupınar, the military forced the abdication of Constantine, and George succeeded to the Greek throne on 27 September 1922.[2]

Following a failed royalist coup in October 1923, the Revolutionary Committee asked him to depart Greece while the National Assembly considered the question of the future form of government. He complied and, although he refused to abdicate, he left on 19 December 1923 for exile in his wife's home nation of Romania. When a republic was proclaimed on 25 March 1924, he was officially deposed and stripped of his Greek nationality, and his property was confiscated.[3]

His wife stayed in Bucharest whilst he spent more and more time abroad visiting Britain, and his mother in Florence. In 1932 he left Romania permanently and moved to Britain.[4] Elisabeth and he had no children, and were divorced on 6 July 1935.[5]

Restoration of monarchy and the Metaxas regime 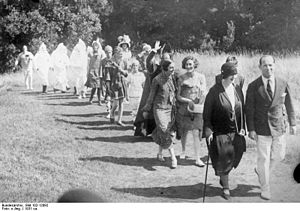 George and his wife Elisabeth of Romania in exile, London (1931)

In Greece between 1924 and 1935 there were 23 changes of government, a dictatorship, and 13 coups. General Georgios Kondylis, a former Venizelist who had suddenly decided to throw in his lot with the monarchist forces, overthrew the government in October 1935 and appointed himself Prime Minister. He then arranged a plebiscite both to approve his government and to bring an end to the republic. On 3 November 1935, almost 98% of the reported votes supported restoration of the monarchy.[6] The balloting was not secret, and participation was compulsory. As Time described it at the time, "As a voter one could drop into the ballot box a blue vote for George II and please General George Kondylis, or one could cast a red ballot for the Republic and get roughed up." [7]

George, who had been living at Brown's Hotel in London, returned to Greek soil on November 25. Almost immediately he and Kondylis disagreed over the terms of a general amnesty the King wanted to declare, and George appointed an interim Prime Minister, Konstantinos Demertzis. New elections were held in January, which resulted in a hung parliament with the Communists (who were naturally anti-monarchist) holding the balance of power. A series of unexpected deaths amongst the better-known politicians (including Kondylis and Demertzis), as well as the uncertain political situation, led to the rise to power of veteran army officer Ioannis Metaxas. On 4 August 1936, George endorsed Metaxas's establishment of dictatorship – the "4th of August Regime",[8] signing decrees that dissolved the parliament, banned political parties, abolished the constitution, and purported to create a "Third Hellenic Civilization."[9] The King, ruling with Prime Minister Metaxas, oversaw a right-wing regime in which political opponents were arrested and strict censorship was imposed. An Index of banned books during that period included the works of Plato, Thucydides and Xenophon.[9] 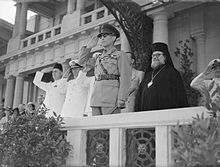 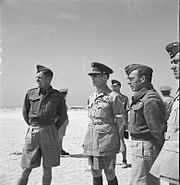 George II during his visit to a Greek fighter station, 1944.

Despite the nationalist government's strong economic and military ties to Germany, a connection which continued with Nazi Germany, King George was known to have pro-British feelings at the start of World War II. On 28 October 1940 Metaxas rejected an Italian ultimatum demanding the stationing of Italian troops in Greece, and Italy invaded, starting the Greco-Italian War. The Greeks mounted a successful defense and eventually occupied the southern half of Albania (then an Italian protectorate), but when the Germans invaded from Bulgaria on 6 April 1941 the Greeks and the British Expeditionary Force were overrun, and mainland Greece occupied.[10]

On April 23 the King and the government left the Greek mainland for Crete, but after the German airborne attack on the island he was evacuated to Egypt. Once again he went into exile to Great Britain, seemingly at the behest of King Farouk of Egypt and Farouk's pro-Italian ministers.[11]

During the war he remained the internationally recognized head of state, backed by the exiled government and Greek forces serving in the Middle East. In occupied Greece, however, the leftist partisans of the National Liberation Front (EAM) and National Popular Liberation Army (ELAS), now unfettered by Metaxas' oppression, had become the largest Greek Resistance movement, enjoying considerable popular support. As liberation drew nearer, however, the prospect of the King's return caused dissensions both inside Greece and among the Greeks abroad. Although the King effectively renounced the Metaxas regime in a radio broadcast, a large section of the people and many politicians rejected his return on account of his support of the dictatorship. In November 1943 George wrote to the Prime Minister-in-exile Emmanouil Tsouderos, "I shall examine anew the question of the date of my return to Greece in agreement with the Government". Either deliberately or accidentally, the version released for publication omitted the words "of the date", creating the impression that George had agreed to a further plebiscite on the monarchy, even though a retraction was issued.[12]

After two changes of Prime Minister, the establishment of a rival Communist-led government in occupied Greece and a pro-EAM mutiny among the armed forces in the Middle East, it was agreed in the May 1944 Lebanon conference that the fate of the monarchy would be decided in a national referendum. Bowing to Allied pressure, George was forced to appoint Archbishop Damaskinos of Athens as Regent in January 1945. Damaskinos immediately appointed a republican-dominated government. Ill, exhausted and powerless, George bought a lease on a house in Chester Square, Belgravia and made a home there with his long-time mistress.[13]

Return to Greece and death

In elections held on 31 March 1946 the monarchist parties won a clear majority of the parliamentary seats, aided by the abstention of the Communists, and the referendum on the monarchy was set for 1 September. Between then and the plebiscite, the electoral registers were revised under Allied supervision. The announced results claimed 68.4% in favour of the King's return on a 86.6% turnout.[14] However, even Allied observers acknowledged that the official results were marked by significant fraud by monarchist supporters. In the words of the official Allied observation report, "There is no doubt in our minds that the party representing the government view exercised undue influence in securing votes in support of the return of the King."[15]

On 26 September George returned to Greece to find the Royal Palace looted, the woods at Tatoi chopped down for fuel and corpses buried in shallow graves outside.[16] His country faced economic collapse and political instability.

He died of arteriosclerosis on 1 April 1947, after he was discovered unconscious in his room at the Royal Palace in Athens. When the news was announced some thought it to be an April Fool's Day joke.[17]

His funeral was held on 6 April at the Orthodox Metropolitan Cathedral of Athens.

He was succeeded by his younger brother, Paul. On account of his many exiles, he is said to have remarked that "the most important tool for a King of Greece is a suitcase."[18]