George's father Maximilian de Beauharnais, 3rd Duke of Leuchtenberg had traveled to St. Petersburg, eventually winning the hand of Grand Duchess Maria Nikolaevna, Nicholas I's eldest daughter in 1839. Maximilian was subsequently bestowed with the style Imperial Highness and given the title Prince Romanowsky.[2] As the son of a Russian grand duchess and an ennobled Russian prince, George and his siblings were always treated as grand dukes and duchesses, bearing the styles Imperial Highness.[3][4]

After their father's death in 1852, Grand Duchess Maria morganatically remarried to Count Grigori Stroganov two years later.[5] As this union was kept secret from her father Emperor Nicholas I (and her brother Emperor Alexander II could not permit the union, preferring instead to feign ignorance), Maria was forced into exile abroad.[5] Alexander felt sympathy for his sister however, and paid special attention to her children from her first marriage, who lived in St. Petersburg without their mother.[5]

On 12 May 1879, George married Duchess Therese Petrovna of Oldenburg,[1] a daughter of Duke Peter Georgievich of Oldenburg and Princess Therese of Nassau-Weilburg. Therese's elder brother Duke Alexander Petrovich had been married to George's sister Princess Eugenia Maximilianovna since 1868. Therese's grandfather had married Grand Duchess Catherine Pavlovna, daughter of Paul I of Russia, and their descendants had been raised in Russia ever since and become completely "Russianized", much like George's own family.[4] Thus despite her German title, Duchess Therese, like her father before him, had grown up entirely in Russia.[6][7] She was always considered a part of the Russian imperial family.[7]

George and Theresa had one son:

In July 1881, the British Reserve Squadron held entertainments on board the HMS Hercules, which was stationed in Cronstadt.[8] The luncheon was attended by Therese and her husband, as well as the Emperor and Empress and other important royal Russian and German figures.[8] Two years later, on 19 April 1883, tragedy struck the couple when Duchess Therese died in St. Petersburg.[1] 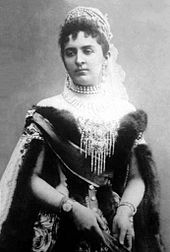 Two Montenegrin princesses, Milica and Anastasia, were educated at a convent in St. Petersburg under the immediate protection of Empress Maria Feodorovna.[9] They remained at the convent for a year after their educations were complete, and made themselves extremely popular by enjoying themselves in society.[9] Both girls soon caught the eye of two members of the Russian royal family, Grand Duke Peter Nikolaevich and George himself.[9]

They had two children:

The family owned a small estate near the Black Sea, where they spent the winter.[10] While staying there in 1905, they witnessed the battleship Potemkin revolt.[10] In the spring, the family stayed at their Peterhof residence the Villa Sergievskaia Datcha for the entire following summer.[10]

When still married to his second wife, George moved in with his French mistress, to the great anger of the morally upright Emperor Alexander III.[11] When told that George was spending his vacations at the coastal town of Biarritz in south-western France, Alexander declared "So the prince is washing his filthy body in the waves of the ocean".[11]

Their marriage was considered "tempestuous and stormy," with George reportedly "insult[ing] and outrag[ing] her from the very first day of their marriage".[12][13] Anastasia was able to obtain a divorce from him several years into their marriage, on 15 November 1906.[12] Various sources attribute George to have been good-looking but a "stupid and rather sorry individual", although these reports were most often in connection with his second wife, who when arranging her divorce from George, was widely reported to want to do so because she could no longer live with a man of "intolerable stupidity".[14][15] Anastasia later remarried to Grand Duke Nicholas Nikolaevich of Russia, a grandson of Nicholas I of Russia[16] (and on his mother's side a nephew of George's first wife Theresa). She and her sister became famous in Russian society as the "black plague," so called because of their home country of Montenegro as well as their dark complexions.[16]

In 1901, through either the deaths or morganatic marriages of his elder brothers, George became the head of the Russian branch of the House of Beauharnais.[14] At the turn of the twentieth century, when still married to Princess Anastasia of Montenegro, George was considered as a possible successor to the childless Alexander I of Serbia.[17] Alexander was overthrown and murdered in a military coup, and succeeded by Peter I of Serbia.

George inherited a large collection of paintings, sculptures, and other works of art from his father, who had brought them with him when he moved from Munich to St. Petersburg to marry Grand Duchess Maria Nikolaevna of Russia.[18] He was buried in tomb # 29 of the Grand Ducal Mausoleum in the Peter and Paul Fortress in St. Petersburg.

George was the only one of his brothers to make a legitimate dynastic union. As both of his sons failed to produce legitimate issue, the title Duke of Leuchtenberg passed to another line.

George appears as a character in The White Night of St. Petersburg, written by a relative Prince Michael of Greece and Denmark. 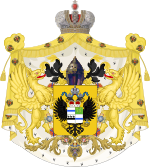 Coat of Arms of the Dukes of Leuchtenberg