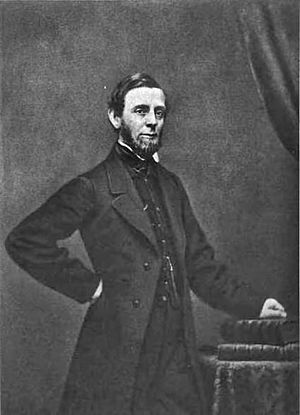 Putnam was born in Brunswick, Maine. On moving to New York City, Putnam was given his first job by Jonathan Leavitt, who subsequently published Putnam's first book. In 1838, George Palmer Putnam and John Wiley established the publishing house of "Wiley & Putnam" in New York City. In 1841, Putnam went to London, UK where he set up a branch office, the first American to ever do so. In 1848 he returned to New York where he dissolved the partnership with John Wiley and established "G. Putnam Broadway," publishing a variety of works including quality illustrated books.

In 1852, with the assistance of George William Curtis and other partners, he founded Putnam's Magazine. It operated until 1856, resumed in 1868, and finally merged with Scribner's Monthly.[1] His company was the official publisher to the 1853 New York World's Fair.

George Putnam published the books of many classic American authors including his close friend Washington Irving, William Cullen Bryant, James Fenimore Cooper, and Edgar Allan Poe. He served as secretary for the Publishers' Association for many years and was an advocate of the creation of International Copyright Law. During the American Civil War, he participated in the Loyal Publication Society of New York, and suspended his business for three years (1863–1866) to become the United States government's Collector of Internal Revenue in New York City.[2]

An important member of the New York artistic community, Putnam was the leading publisher of art books in his time and became one of the founders of the Metropolitan Museum of Art and served as honorary superintendent in 1872. He was also chairman of the Committee on Art at the Vienna Universal Exposition. He is believed to have been the first publisher to offer "royalties" to authors like Elizabeth Barrett Browning and Thomas Carlyle.[2][3]

George Putnam married Victorine Haven. Their daughter, Mary Corinna Putnam (1842–1906) was a pioneering female doctor, the first woman admitted to the Faculté de Médecine de Paris. One of their sons, Herbert Putnam (1861–1955), became a noted librarian who served as the United States Librarian of Congress.

On Putnam's death in 1872 his sons George and John inherited the business and the firm's name was changed to G. P. Putnam's Sons. George Putnam published his father's memoirs in 1912 and in 2000, his life's story was told again under the title George Palmer Putnam - Representative American Publisher by Ezra Greenspan, Associate Professor of English at the University of South Carolina.

George Palmer Putnam's grandson and namesake, George P. Putnam (1887–1950), was part of the family business but was also an author and explorer who was married to the famous aviatrix, Amelia Earhart. His granddaughter Brenda Putnam was a well-respected sculptor and author.