A 1946 graduate of West Point[1] Patton was initially trained as an infantry officer. His first assignment was to Regensburg, West Germany where he participated in the 1948 Berlin Airlift. The troops under his command were used to load supplies onto Air Force transport aircraft bound for Berlin. In 1952,he joined the 63rd tank Bn Co C 1st Infantry division as a platoon leader. A year after he returned from Germany, he married Joanne Holbrook.

Patton served in Korea starting in February 1953, commanding "A" Company of the 140th Tank Battalion, 40th Infantry Division.[2] Patton received his first Silver Star and the Purple Heart in Korea.

Returning to the United States in 1954, Patton, now a captain, was initially assigned to West Point but was quickly picked up as part of an exchange program and was sent to teach at the United States Naval Academy.[3]

Patton served a total of three tours of duty in South Vietnam, the first from April 1962 to April 1963 at Military Assistance Command, Vietnam, during which he was promoted to lieutenant colonel. He then took command of the 2nd Medium Tank Battalion, 81st Armored Regiment of the 1st Armored Division at Fort Hood Texas, before his second tour in 1967, this one lasting only three months.[4] During Patton's final and most intense tour, lasting from January 1968 to January 1969, he was awarded two Distinguished Service Crosses for his actions on the battlefield.[5] During this final tour, he was initially assigned as Chief of Operations and Plans at Headquarters, United States Army Vietnam. However, after his promotion to colonel in April 1968, he was given command of the 11th Armored Cavalry Regiment. During his three tours in Vietnam, Patton, who frequently used helicopters as a mobile command post, was shot down three times[citation needed] and was awarded the Distinguished Flying Cross.

After Vietnam, he was promoted to brigadier general in June 1970 before becoming the commanding officer of the U.S. 2nd Armored Division, a unit his father had commanded in North Africa during World War II, making this the first time in U.S. Army history that a father and a son had both commanded the same division. The Abramses were the second to accomplish this feat.

Brigadier General Patton was Deputy Post Commander at Fort Knox, Kentucky during 1972. Patton was known by the troops as a "GI General," often appearing in A-2-3 Dining Hall during meal times. Often the general would be behind the serving line.[citation needed]

Major General Patton was assigned to the VII Corps in Germany, as the Deputy Commander. He was stationed near Stuttgart, where Manfred Rommel, son of Field Marshal Erwin Rommel, was a government officer who later became the city's mayor and the two met for the first time.[6] The sons of the two former adversaries entered a much publicized friendship, which continued until the general's death in 2004. The men shared the same birthday, December 24. 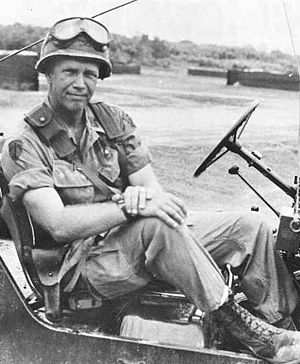 In the years after his 1980 retirement, Patton turned an estate owned by his father located north of Boston into the 250-acre (100 ha) Green Meadows Farm,[8] where he named the fields after Vietnam soldiers who died under his command.[5] In 1997 Patton worked alongside author Brian Sobel to write The Fighting Pattons, a book which served as an official family biography of his father as well as a comparison between the military of his father's generation and that of his son, a time which covered five conflicts and almost 70 years of combined service.

He died from a form of Parkinson's disease[9] at the age of 80 in 2004 and is survived by his wife Joanne (née Holbrook), and their five children, Mother Margaret Georgina Patton OSB, George S. Patton V, Robert H. Patton, Helen Patton-Plusczyk, and Benjamin Wilson Patton; six grandchildren; and a great-grandson. Youngest son Benjamin Patton has written a family biography entitled Growing Up Patton: Reflections on Heroes, History, and Family Wisdom, which reflected on his grandfather and father's careers.[10][11]