Amantine-Lucile-Aurore Dupin[1] (French: [amɑ̃tin lysil oʁɔʁ dypɛ̃]; 1 July 1804 – 8 June 1876), best known by her pseudonym George Sand (/sænd/;[2] French: [ʒɔʁʒ sɑ̃d]), was a French novelist and memoirist. She is equally well known for her much publicized romantic affairs with a number of artists, including the composer and pianist Frédéric Chopin and the writer Alfred de Musset. 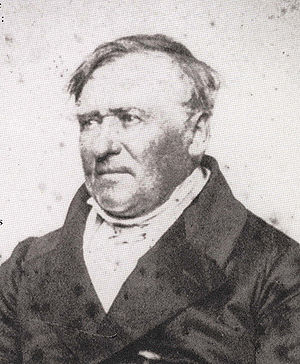 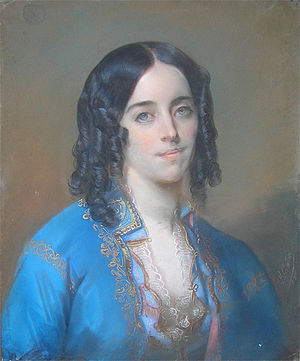 Sand wrote: "My name is not Marie-Aurore de Saxe, Marquise of Dudevant, as several of my biographers have asserted, but Amantine-Lucile-Aurore Dupin, and my husband, M. François Dudevant, claims no title: the highest rank he ever reached was that of infantry second lieutenant."[3]

Always known simply as "Aurore"[4] she was born in Paris, but raised for much of her childhood by her grandmother, Marie-Aurore de Saxe, Madame Dupin de Francueil, at her grandmother's estate, Nohant, in the French province of Berry (see House of George Sand). Sand later used the setting in many of her novels. It has been said[by whom?] that her upbringing was quite liberal. Her father, Maurice Dupin, was the grandson of the Marshal General of France, Maurice, Comte de Saxe, an illegitimate son of Augustus II the Strong, King of Poland and a Saxon elector, and a cousin to the sixth degree to the kings of France Louis XVI, Louis XVIII and Charles X.[5] Sand's mother, Sophie-Victoire Delaborde, was a commoner.

Sand conducted affairs of varying duration with Jules Sandeau (1831), Prosper Mérimée, Alfred de Musset (summer 1833 – March 1835), Louis-Chrysostome Michel, Pierre-François Bocage, Félicien Mallefille, Louis Blanc, and Frédéric Chopin (1837–1847).[6] Later in life, she corresponded with Gustave Flaubert. Despite their obvious differences in temperament and aesthetic preference, they eventually became close friends. She engaged in an intimate friendship with actress Marie Dorval, which led to widespread but unconfirmed rumours of a lesbian affair.[7] Letters written by Sand to Dorval made such references as "wanting you either in your dressing room or in your bed."

In Majorca one can still visit the (then-abandoned) Carthusian monastery of Valldemossa, where she spent the winter of 1838–1839 with Chopin and her children.[8] This trip to Majorca was described by her in Un hiver à Majorque (A Winter in Majorca), first published in 1841.[9] Chopin was already ill with incipient tuberculosis (or, as has recently been suggested, cystic fibrosis)[10] at the beginning of their relationship, and spending a winter in Majorca—where Sand and Chopin did not realize that winter was a time of rain and cold, and where they could not get proper lodgings—exacerbated his symptoms. They separated two years before his death for a variety of reasons. 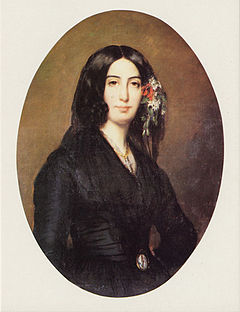 In her novel Lucrezia Floriani, Sand used Chopin as a model for a sickly Eastern European prince named Karol. He is cared for by a middle-aged actress past her prime, Lucrezia, who suffers a great deal through her affection for Karol.[11] Though Sand claimed not to have made a cartoon out of Chopin, the book's publication and widespread readership may have exacerbated their antipathy to each other. However, the tipping point in their relationship involved her daughter Solange. 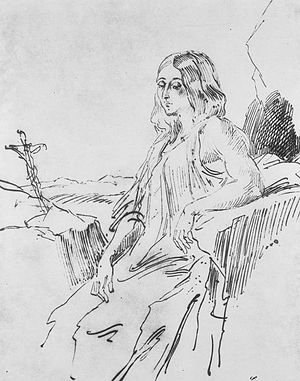 Chopin continued to be cordial to Solange after she and her husband, Auguste Clésinger, had a vicious falling out with Sand over money. Sand took Chopin's support of Solange as outright treachery and confirmation that Chopin had always "loved" Solange.[12] Sand's son Maurice also disliked Chopin. Maurice wanted to establish himself as the "man of the estate" and did not wish to have Chopin as a rival for that role. Chopin was never asked back to Nohant. In 1848, he returned to Paris from a tour of the United Kingdom, to die at the Place Vendôme in the following year. Chopin was penniless at that time; his friends had to pay for his stay there, as well as his funeral at the Madeleine. The funeral was attended by over 3,000 people, including Eugène Delacroix, Franz Liszt, Victor Hugo and other famous people. George Sand, however, was notable by her absence.

Sand was also known for her implication and writings during the Paris Commune, where she took a position for the Versailles assembly against the "communards", urging them to take violent action against the "rebels".[13]

A liaison with the writer Jules Sandeau heralded her literary debut. They published a few stories in collaboration, signing them "Jules Sand". Her first published novel, Rose et Blanche (1831), was written in collaboration with Sandeau. She subsequently adopted, for her first independent novel, Indiana (1832), the pen name that made her famous – George Sand.[14]

In addition, Sand authored literary criticism and political texts. She wrote many essays and published works establishing her socialist position. Because of her early life, she sided with the poor and working class as well as women's rights. When the 1848 Revolution began, Sand started her own newspaper, which was published in a workers' co-operative.[16] This allowed her to publish more political essays. She wrote: "I cannot believe in any republic that starts a revolution by killing its own proletariat." 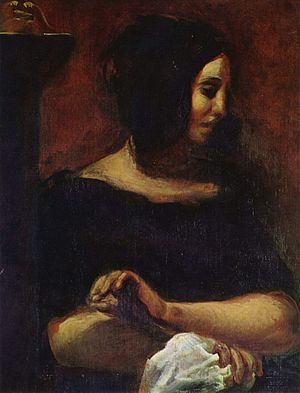 She was known well in far reaches of the world, and her social practices, her writings and her beliefs prompted much commentary, often by other luminaries in the world of arts and letters. A few excerpts demonstrate much of what was often said about George Sand:

She was a thinking bosom and one who overpowered her young lovers, all Sybil—a Romantic.

What a brave man she was, and what a good woman.

The most womanly woman.

The most widely used quote of her own is: "There is only one happiness in life, to love and be loved."

George Sand died at Nohant, near Châteauroux, in France's Indre département on 8 June 1876, at the age of 71 and was buried in the grounds of her home there. In 2003, plans that her remains be moved to the Panthéon in Paris resulted in controversy.[17][18]

Sand's reputation came into question when she began sporting men's clothing in public[when?], which she justified by the clothes being far sturdier and less expensive than the typical dress of a noblewoman at the time. In addition to being comfortable, Sand's male dress enabled her to circulate more freely in Paris than most of her female contemporaries, and gave her increased access to venues from which women were often barred, even women of her social standing. Also scandalous was Sand's smoking tobacco in public; neither peerage nor gentry had yet sanctioned the free indulgence of women in such a habit, especially in public (though Franz Liszt's paramour Marie d'Agoult affected this as well, smoking large cigars).

These and other behaviors were exceptional for a woman of the early and mid-19th century, when social codes — especially in the upper classes — were of the utmost importance. As a consequence of many unorthodox aspects of her lifestyle, Sand was obliged to relinquish some of the privileges appertaining to a baroness, though the mores of the period did permit upper-class wives to live physically separate from their husbands, without losing face, provided the estranged couple exhibited no blatant irregularity to the outside world.

Poet Charles Baudelaire was a contemporary critic of George Sand: "She is stupid, heavy and garrulous. Her ideas on morals have the same depth of judgment and delicacy of feeling as those of janitresses and kept women ... The fact that there are men who could become enamoured of this slut is indeed a proof of the abasement of the men of this generation."[19] Other writers of the period, however, differed in their assessment. Flaubert, by no means an indulgent or forbearing critic, was an unabashed admirer. Honoré de Balzac, who knew Sand personally, once said that if someone thought George Sand wrote badly, it was because their own standards of criticism were inadequate. He also noted that her treatment of imagery in her works showed that her writing had an exceptional subtlety, having the ability to "virtually put the image in the word".[20]

Frequent literary references to George Sand can be found in Possession (1990) by A. S. Byatt. The American poet Walt Whitman cited Sand's novel Consuelo as a personal favorite, and the sequel to this novel, La Comtesse de Rudolstadt, contains at least a couple of passages that appear to have had a very direct influence on him. Elizabeth Barrett Browning (1806–61), the English poet, produced two poems: "To George Sand: A Desire" and "To George Sand: A Recognition". The character of Stepan Verkhovensky in Fyodor Dostoevsky's novel Demons took to translating the works of George Sand in his periodical, before the periodical was subsequently seized by the ever-cautious Russian government of the 1840s. (Dostoevsky himself "read widely in the numerous novels of George Sand" and translated her La dernière Aldini in 1844 but "discovered to his dismay that the work had already appeared in Russian".[21]) Sand is also referred to in Virginia Woolf's book-length essay A Room of One's Own along with George Eliot and Currer Bell as "all victims of inner strife as their writings prove, sought ineffectively to veil themselves by using the name of a man".[22]

George Sand is referenced a number of times in the play Voyage, the first part of Tom Stoppard's The Coast of Utopia trilogy. And in the first episode of the "Overture" to Swann's Way – the first novel in Marcel Proust's In Search of Lost Time sequence – a young, distraught Marcel is calmed by his mother as she reads from François le Champi, a novel which (it is explained) was part of a gift from his grandmother, which also included La Mare au Diable, La Petite Fadette, and Les Maîtres Sonneurs. As with many episodes involving art in À la recherche du temps perdu, this reminiscence includes commentary on the work. George Sand also makes an appearance in Isabel Allende's Zorro, going still by her given name, as a young girl in love with Diego de la Vega, i.e., Zorro.

In music, film and television