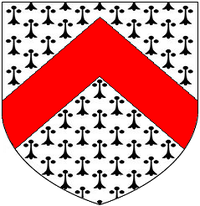 He succeeded his father as 11th Baron Audley and 8th Baron Tuchet on 30 December 1563, and served in the Parliament of England from 30 September 1566 to 5 April 1614. He was a Fellow of Magdalen College, Oxford. He was Governor of Utrecht in the Netherlands, and Governor of Kells, County Meath, Ireland. He was wounded at the Battle of Kinsale, 24 December 1601. He resided primarily in Ireland and was summoned by writ to the Irish House of Lords 11 March 1613/1614.

He was created 1st Baron Audley of Orier (County Armagh) and 1st Earl of Castlehaven (County Cork) on 6 September 1616 in the Peerage of Ireland.

They had seven children:

The administration of his will was granted to his daughter Eleanor, wife of Sir Archibald Douglas. He was succeeded as Earl of Castlehaven by his son, Mervyn. His widow married Sir Piers Crosby on 6 March 1618/1619, and was living in 1644.