He is perhaps best remembered today for his destruction of many miles of Hadrian's Wall to the west of Newcastle upon Tyne, flattening it and using its foundations as the core of his Military Road in Northumberland. This was a response to the Jacobite rising of 1745.

Born the son of Jerome Wade in Killavally, Westmeath in Ireland, Wade was commissioned into the Earl of Bath's Regiment on 26 December 1690[1] and served in Flanders in 1692, fighting at the Battle of Steenkerque in August 1692 during the Nine Years' War and earning a promotion to lieutenant on 10 February 1693.[1] He transferred to Sir Bevil Granville's Regiment on 19 April 1694[2] and was promoted to captain on 13 June 1695.[1]

He served as second-in-command to James Stanhope in Minorca in 1708,[1] leading one of the storming parties on Fort St. Philip, before returning to Spain in 1710, where he fought at the Battle of Saragossa in August 1710.[1] He was promoted to major-general on 3 October 1714[3] and became commander of the British forces in Ireland in November 1714.[2]

Wade returned home to join in the suppression of the Jacobite rising of 1715 and undertook security duties in Bath, where he unearthed a haul of Jacobite weapons.[2] He entered politics as MP for Hindon in 1715.[4] On 19 March 1717 he became colonel of the Earl of Plymouth's Regiment of Horse.[2]

In 1719 he served as second in command to Viscount Cobham[3] during the War of the Quadruple Alliance when Cobham led a force of 4,000 troops on a raid on the Spanish coastline which captured Vigo and occupied it for ten days before withdrawing.[5] 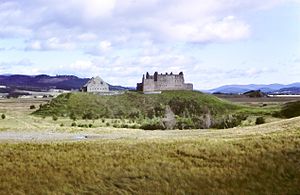 The government of George I sent Wade to inspect Scotland in 1724.[3] He recommended the construction of barracks, bridges and proper roads to assist in the control of the country. On 10 May 1725 he was appointed Commander in Chief of His Majesty's forces, castles, forts and barracks in North Britain, tasked with carrying out his own recommendations.[8] Over the next twelve years Wade directed the construction of some 240 miles (390 km) of roads, plus 30 bridges (including the Tay Bridge at Aberfeldy).[2] General Wade's military roads linked the garrisons at Ruthven, Fort George, Fort Augustus, and Fort William.[9] A reference in verse is said to be inscribed on a stone at the start of one of his military roads in Scotland: 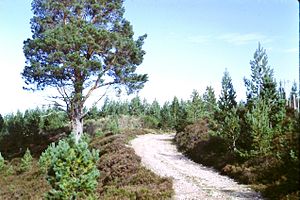 Section of Wade's military road between Inverness and Kingussie, built in the wake of the 1715 Jacobite rebellion.

If you had seen this road before it was made.
You would lift up your hands and bless General Wade.[3]

Wade also organised a militia named "Highland Watches", calling on members of the landed gentry to sign up[10] and raising the first six companies in 1725 (three of Campbells and one each of Frasers, Grants, and Munros).[11] Also in 1725, Wade put down an insurrection after the Government attempted to extend the "Malt tax" to Scotland and enraged citizens in Glasgow drove out the military and destroyed the home of their representative in parliament.[12] He was promoted to lieutenant general on 15 April 1727.[13]

He raised four more "Highland Watch" companies in 1739; these were subsequently reorganized as the Black Watch regiment.[11] He still had the time to sign his support to the Foundling Hospital which was established in 1739 in London.[17] On 22 June 1742 he was appointed Lieutenant-General of the Ordnance[18] and on 24 June 1742 he was appointed a member of the Privy Council.[19]

On 17 December 1743 he became a field marshal[20] with his appointment to the joint command of the Anglo-Austrian force in Flanders against the French in the War of the Austrian Succession.[3] Wade organised an advance towards Lille in July 1744 but the action became stalled in the face of logistical problems.[2] He resigned from his command in March 1745, returning home to become Commander-in-Chief of the Forces.[3] 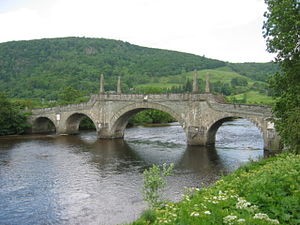 Wade's Bridge over the Tay at Aberfeldy

In October 1745 during the Jacobite rising Wade focused his troops on Newcastle upon Tyne on the east coast of England; however the Jacobite forces advanced from Scotland down the west coast of England via Carlisle into Lancashire and the speed of their advance left Wade scrambling.[3] In freezing conditions and with his men starving, he failed to counter their march into England or their subsequent retreat back from Derby to Scotland; Wade was replaced as Commander-in-Chief by Prince William, Duke of Cumberland who led the army to success at the Battle of Culloden in April 1746.[21]

It was because of the difficulties Wade encountered marching his troops cross-country from Newcastle to Carlisle, that he built his Military Road west of Newcastle in 1746, entailing such destruction of Hadrian's Wall. His Military Road is still in use today as the B6318; it should not be confused with the Military Way built by the Romans immediately south of Hadrian's Wall.[22]

Wade received mention in a verse sung as part of God Save the King around 1745:[3]

Lord, grant that Marshal Wade
May, by thy mighty aid,
Victory bring.
May he sedition hush
And, like a torrent, rush
Rebellious Scots to crush.
God save the King.

Wade died, unmarried, on 14 March 1748 and is buried at Westminster Abbey where his life is recognised by a monument created by Louis-François Roubiliac.[23]