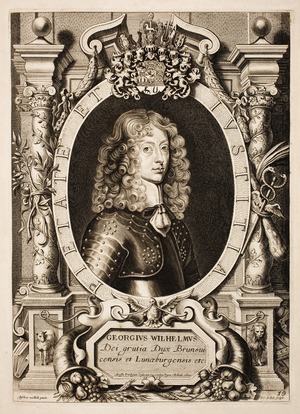 George William German: Georg Wilhelm (Herzberg am Harz, 26 January 1624 – 28 August 1705, Wienhausen) was Duke of Brunswick-Lüneburg. He ruled first over the Principality of Calenberg, a subdivision of the duchy, then over the Lüneburg subdivision. In 1689, he occupied the Duchy of Saxe-Lauenburg and passed it on to his successors.[1] George William was the father of Sophia Dorothea of Celle, wife of George I.

George William was the second son of George, Duke of Brunswick-Lüneburg. He had an elder brother, two younger brothers, and several sisters, including Queen Sophia Amalie of Denmark.

In exchange for being freed from the obligation to marry Princess Sophia of the Palatinate, George William ceded Lüneburg to his younger brother Ernest Augustus, settling for the smaller duchy of Celle and promising to remain unmarried so that he would produce no legitimate heir who might pose a challenge to his brother's claim. Ernest Augustus then married Sophia and became the Duke of Hanover.

This renunciation left George William free to marry whoever he wished, and indulge his desires to travel and socialize, without being encumbered by considerations of state. In 1665, when George William entered into a morganatic marriage with his long-time mistress, Eleanor, Countess of Wilhelmsburg. In 1666, their only child and daughter, Sophia Dorothea, was born.

By 1676, it had become quite clear that among the four brother (George William and three others), only the youngest (Ernest Augustus)had produced any heirs male, and that the entire duchy of Luneburg was likely to be united under Ernest's eldest son George Louis. George William therefore wanted that George Louis should marry his daughter Sophia, whose marriage prospects were otherwise not bright, given the circumstances of her birth. To George William's annoyance, George Louis and his parents refused the proposal on the grounds of status. At this point (in 1676), desiring to improve the status of his mistress and daughter, and in open violation of his promise, George William legitimized his daughter and declared that his marriage to Eleonore was not morganatic but valid to both church and state. This development greatly alarmed his relatives, as it threatened to hinder the contemplated union of the Lüneburg territories. Indeed, if George William had had a son, a serious succession crisis could have arisen. No son however was born, and in 1682, George Louis' parents finally agreed to the proposed marriage as a way of avoiding uncertainty and dispute. Sophia was given in marriage to George Louis in 1682, and was delivered of a son and heir the following year, named George after his father and maternal grandfather, and would be the future George II of England.

In 1689, Julius Francis, Duke of Saxe-Lauenburg died leaving no son and no accepted heir male, but only two daughters, Anna and Mary. The duchy had followed the Salic law since time immemorial, but Duke Julius Francis decided to nominate his elder daughter as his heir and proclaimed laws permitting female succession in his duchy. This self-serving innovation was not accepted by senior members of his dynasty (the other potential successors) and a succession crisis ensued.

George William was one of the nearest and senior-most male-line claimants to the succession. Shortly after the death of the duke, George William invaded the duchy with his troops and occupied it. The other claimants included the five Ascanian-ruled Principalities of Anhalt, Saxony, Saxe-Wittenberg, Sweden and Brandenburg, and also the neighbouring Mecklenburg-Schwerin and the Danish duchy of Holstein, whose ruler was the King of Denmark.

However, only George William and Christian V of Denmark (whose mother was George William's own sister) engaged militarily on this question. An accord was soon reached between them, and on 9 October 1693 they agreed (in the Hamburg Comparison, or Hamburger Vergleich) that George William - who now de facto held most of Saxe-Lauenburg - would retain the duchy in a personal union.

Meanwhile, the Emperor Leopold I, who had no direct claim on the duchy, occupied the Land of Hadeln, an exclave of Saxe-Lauenburgian, and held it in imperial custody. Apart from that, Leopold did not attempt to use force in Saxe-Lauenburg. In 1728, his son the Emperor Charles VI finally legitimised the de facto takeover and enfeoffed George William's second successor, the Elector George II Augustus of Hanover (also king of Great Britain) with the duchy of Saxe-Lauenburg, but Hadeln remained in imperial custody until 1731, when it was ceded to George Augustus too.

During the Swedish-Brandenburg War, George William participated from 1675 to 1676 in the campaign against Bremen-Verden as commander-in-chief of the allied forces against Sweden.